NARSAQ, Greenland — As icebergs in the Kayak Harbor pop and hiss while melting away, this remote Arctic town and its culture are also disappearing in a changing climate.

Narsaq’s largest employer, a shrimp factory, closed a few years ago after the crustaceans fled north to cooler water. Where once there were eight commercial fishing vessels, there is now one.

As a result, the population here, one of southern Greenland’s major towns, has been halved to 1,500 in just a decade. Suicides are up.

“Fishing is the heart of this town,” said Hans Kaspersen, 63, a fisherman. “Lots of people have lost their livelihoods.”

But even as warming temperatures are upending traditional Greenlandic life, they are also offering up intriguing new opportunities for this state of 57,000 — perhaps nowhere more so than here in Narsaq.

Vast new deposits of minerals and gems are being discovered as Greenland’s massive ice cap recedes, forming the basis of a potentially lucrative mining industry.

This could be momentous for Greenland, which has long relied on half a billion dollars a year in welfare payments from Denmark, its parent state. Mining profits could help Greenland become economically self sufficient, and may someday even render it the first sovereign nation created by global warming.

“One of our goals is to obtain independence,” said Vittus Qujaukitsoq, a prominent labor union leader.

But the rapid transition from a society of individual fishermen and hunters to an economy supported by corporate mining raises difficult questions. How would Greenland’s insular settlements tolerate an influx of thousands of Polish or Chinese construction workers, as has been proposed? Will mining despoil a natural environment essential to Greenland’s national identity — the whales and seals, the silent icy fjords, and mythic polar bears? Can fishermen reinvent themselves as miners?

“I think mining will be the future, but this is a difficult phase,” said Jens B. Frederiksen, Greenland’s housing and infrastructure minister and a deputy premier. “It’s a plan that not everyone wants. It’s about traditions, the freedom of a boat, family professions.” 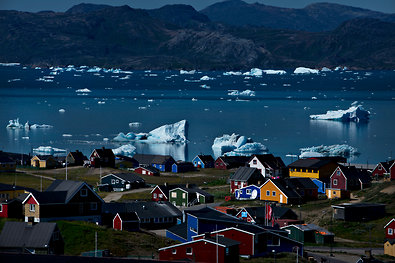 The Arctic is warming even faster than other parts of the planet, and the rapidly melting ice is causing alarm among scientists about sea-level rise. In northeastern Greenland, average yearly temperature have risen 4.5 degrees in the past 15 years, and scientists predict the area could warm by 14 to 21 degrees by the end of the century.

Already, winter pack ice that covers the fjords is no longer stable enough for dog sledding and snowmobile traffic in many areas. Winter fishing, essential to feeding families, is becoming hazardous or impossible.

It has long been known that Greenland sat upon vast mineral lodes, and the Danish government has mapped them intermittently for decades. Niels Bohr, Denmark’s Nobel Prize-winning nuclear physicist and a member of the Manhattan Project, visited Narsaq in 1957 because of its uranium deposits.

But previous attempts at mining mostly failed, proving too expensive in the inclement conditions. Now, warming has altered the equation.

Greenland’s Bureau of Minerals and Petroleum, charged with managing the boom, currently has 150 active licenses for mineral exploration, up from 20 a decade ago. Altogether, companies spent $100 million exploring Greenland’s deposits last year, and several are applying for licenses to begin construction on new mines, bearing gold, iron and zinc and rare earths. There are also foreign companies exploring for offshore oil.

“For me, I wouldn’t mind if the whole ice cap disappears,” said Ole Christiansen, the chief executive of NunamMinerals, Greenland’s largest homegrown mining company, as he picked his way along a proposed gold mining site up the fjord from Nuuk, Greenland’s capital. “As it melts, we’re seeing new places with very attractive geology.”

The Black Angel lead and zinc mine, which closed in 1990, is applying to reopen this year, said Jorgen T. Hammeken-Holm, who oversees licensing at the country’s mining bureau, “because the ice is in retreat and you’re getting much more to explore.”

The Greenlandic government hopes that mining will provide new revenue. In granting Greenland home rule in 2009, Denmark froze its annual subsidy, which is scheduled to be decreased further in the coming years.

But Greenland is also looking to leverage the power afforded by its newfound mineral resources to wield “political influence on issues that matter to us,” said Mr. Frederiksen, the deputy premier.

Many residents say they resent that better-educated Danes tend to run the small country’s few businesses. The government also wants to persuade the European Union to lift its 2009 ban on imports of seal products, which has devastated a crucial businessfor the Inuit people and resulted in a backlog of 300,000 skins — roughly five for every resident.

Here in Narsaq, a collection of brightly painted homes bordered by spectacular fjords, two foreign companies are applying to the government for permission to mine.

“This is huge; we could be mining this for the next 100 years,” said Eric Sondergaard, a geologist with the Australian-owned company Greenland Minerals and Energy, who was on the outskirts of Narsaq one day recently, picking at rocks on a moon-like plateau rich with an estimated 10.5 million tons of rare earth ore.

That proximity promises employment, and the company is already schooling some young men in drilling and in English, the international language of mine operations. It plans to build a processing plant, a new port and more roads. (Greenland currently has none outside of settled areas.) Narsaq’s tiny airport, previously threatened with closure from lack of traffic, could be expanded. A local landlord is contemplating converting an abandoned apartment block into a hotel.

“There will be a lot of people coming from outside and that will be a big challenge since Greenlandic culture has been isolated,” said Jasper Schroder, a student home in Narsaq from university in Denmark.

Still, he supports the mine and hopes it will provide jobs and stem the rash of suicides, particularly among his peers; Greenland has one of the highest suicide rates in the world. “People in this culture don’t want to be a burden to their families if they can’t contribute,” he said.

But not all are convinced of the benefits of mining. “Of course the mine will help the local economy and will help Greenland, but I’m not so sure if it will be good for us,” said Dorothea Rodgaard, who runs a local guesthouse. “We are worried about the loss of nature.”

Many important political decisions are pending for Greenland’s government. The national labor union wants it to ban the use of low-wage crews from abroad because it does not want local pay scales undermined or jobs lost to foreign workers. But there are not enough native workers to build mines without outside help.

And for development to go forward, the government will have to revise a longstanding “zero tolerance” policy for the mining of radioactive material, an outgrowth of Denmark’s adamantly antinuclear stance. Rare earth metals are nearly always intertwined with some radioactive elements.

Simon Simonsen, the mayor of South Greenland, which includes Narsaq, said that most residents of the area had overcome initial fears and accepted the levels of radioactive material involved.

“If we don’t get this mine,” he said, “Narsaq will just get smaller and smaller.”