After Sinai Attack, U.S. and Egypt Step Up Talks on Security 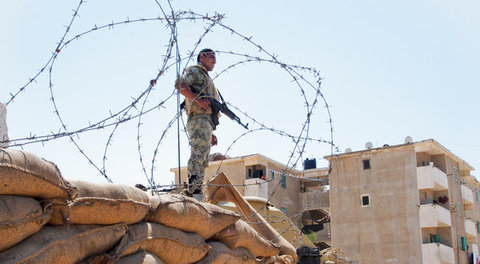 An Egyptian soldier stood guard last week at a checkpoint outside El Arish, in the Sinai Desert, that has faced several attacks.

WASHINGTON — In the wake of the attack that killed 16 Egyptian soldiers near the border with Israel last Sunday, the United States and Egypt are negotiating a package of assistance to address what administration officials described as a worsening security vacuum in the Sinai Peninsula.

Egypt’s new president, Mohamed Morsi, and its military leaders balked last month when Secretary of StateHillary Rodham Clinton and Defense Secretary Leon E. Panetta each separately pressed them to act more aggressively against extremists operating in Sinai. But after the attack, Egypt appears to have overcome its sensitivities about sovereignty and accelerated talks over the details of new American assistance, which would include military equipment, police training, and electronic and aerial surveillance, the officials said.

The attack — in which at least 35 masked gunmen raided an Egyptian border post and commandeered two military vehicles they used to try to storm the border with Israel — has deeply shaken Mr. Morsi’s government. It led to the dismissal of the country’s intelligence chief and a retaliatory... that included the first helicopter airstrikes in Sinai since Israel ended its occupation in 1982.

American and Israeli officials now see Egypt’s response to the attack as an important test of Mr. Morsi’s nascent presidency and, more broadly, the country’s commitment to security after the uprising in 2011 that toppled President Hosni Mubarak.

While the American military has long had ties to its Egyptian counterpart, the deeper, more direct effort now under discussion could bind the United States and Egypt more closely against the shared threat of extremism. It could also overcome reservations among some in Washington about Mr. Morsi’s affiliation with the Muslim Brotherhood, an organization long reviled by American officials for its anti-Western views and Islamist politics.

The Pentagon is discussing a variety of options for sharing intelligence with Egypt’s military and police in Sinai. They include intercepts of cellphone or radio conversations of militants suspected of plotting attacks and overhead imagery provided by aircraft — both piloted and drones — or satellites, the officials said.

“We continue to discuss ways of increasing and improving the Egyptians’ situational awareness in the Sinai,” said a Pentagon official who, like others, spoke on the condition of anonymity because of the diplomatic delicacy of the discussions.

The talks are taking place through military and intelligence channels that the two countries have used for decades, as well as with Mr. Morsi’s new government. Mrs. Clinton, who was traveling in Africa, spoke by telephone with Mr. Morsi’s new prime minister, Hesham Qandil, to offer condolences and discuss greater assistance.

Egypt, though it receives $1.5 billion a year in arms and other military assistance from the United States, is deeply averse to direct American involvement in its security and, in public at least, plays down the aid assistance it has received.

Even the more routine assistance under discussion — including equipment and training of its border police — has faced resistance, but after talks last week, the officials said they were optimistic that Mr. Morsi’s government would allow greater military-to-military collaboration.

While concerns about security in Sinai have intensified during the tumult of the Arab Spring, they are not new. Nor are American offers of military assistance to deal with a problem with multiple causes, including terrain, the government’s neglect of the Bedouin tribes that roam through the sparsely populated area and the treaty with Israel limiting military personnel and firepower.

Militants — some linked to international terrorist organizations, some to thePalestinian territories and some homegrown — have mounted large attacks before, including coordinated bombings in 2005 that killed nearly 100 people in Sharm el Sheik, the Red Sea resort favored by Mr. Mubarak and foreign tourists.

In 2007, after a series of rocket attacks from Gaza into Israel, Mr. Mubarak’s government — including the current military leader, Field Marshal Mohamed Hussein Tantawi — relented to pressure by then Secretary of State Condoleezza Rice and allowed the United States Army Corps of Engineers to draw up plans for improving security on the border, according to diplomatic cables disclosed by WikiLeaks.

That work led to a $23 million project to deploy seismic sensors to detect tunnels used by smugglers hauling contraband and weapons between Gaza and Egypt, though that was undermined in 2009 when Field Marshal Tantawi refused to allow a satellite link to the sensors that would record GPS coordinates. Reflecting the sensitivity to matters of sovereignty, he cited “potential criticism from the opposition of U.S. control over the Egyptian border.”

Mrs. Clinton and Mr. Panetta both raised alarms about security in Sinai in their recent meetings with Mr. Morsi and Field Marshal Tantawi — in Mr. Panetta’s case just days before the attack.

“We indicated concerns about some of the security threats there, some of it the result of border efforts that have not been sometimes effective at controlling individuals and weapons that have come through,” Mr. Panetta said after the talks with Mr. Morsi in Cairo last month.

The State Department’s annual terrorism report, released last month, said the northern Sinai had become “a base for smuggling arms and explosives into Gaza, as well as a transit point for Palestinian extremists.” Last August, a group of gunmen belonging to a group calling itself Ansar al-Jihad launched an attack from the region into Israel that killed eight Israelis, prompting an Israeli counterattack that killed six Egyptian border police officers, the report said.

Ansar al-Jihad, a little-known group, also claimed responsibility for two attacks on a gas pipeline that traverses the Sinai Desert to Israel, according to the report. It was not yet clear who carried out last Sunday’s attack, which American officials described as disturbingly sophisticated. It only ended when Israeli aircraft struck one of the commandeered vehicles after it crossed the border. The officials expressed fear that future attacks could lead, inadvertently or not, to a clash between Israel and Egypt that could threaten the peace treaty between them.

Compounding American concerns, the officials added, is the presence of aninternational peacekeeping force in Sinai that includes about 700 American soldiers and is now led by David M. Satterfield, a retired ambassador. The force, which oversees compliance of the treaty, is not authorized to fight extremists and is not part of the discussions on expanded assistance, but its troops and civilians have encountered the lawlessness in the region, including the threat of kidnappings.

“We have Americans in the Sinai,” Mrs. Clinton told CNN last month after her visit to Cairo. “We’ve had a few concerns about their safety. So this is not only about Egypt and Israel, it’s also about the United States and other members of that multinational force. So it’s in everyone’s interest that we work together to make sure that security is in place in Sinai.”

In her meeting in Cairo with Mr. Morsi, Mrs. Clinton also emphasized that security in Sinai depended on more than the military and police. She pressed Mr. Morsi to move forward with a stalled $50 million American project to promote development in the region to improve infrastructure and create jobs.

“The security environment in Sinai,” said Haim Malka of the Center for Strategic and International Studies, “is not going to be solved by military campaigns alone.”