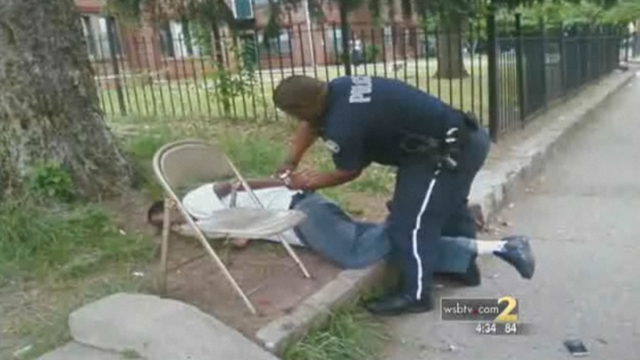 A disabled Atlanta woman says she was sitting outside and waiting for the ice cream man when a cop showed up and ordered her to move. When she refused—because she wasn't in anyone's way, or doing anything wrong—the cop allegedly manhandled her and caused her to fall to the ground. Then he bought her a medium-sized cone.


Wait no, sorry: the officer—one Kenneth Thomas—did not buy his charge, 40-year-old Shequita Walker, any ice cream cones or other novelties, even though she suffers from "severe" joint pain and limited motion and could probably use a break. No, instead he arrested her for disorderly conduct. Apparently she was acting in a "disorderly" manner by being a disabled woman who was asserting her right to sit in a metal chair, in a vacant lot, with three other people while waiting for a frozen dessert. Her attitude, if gone unchecked, could have inspired other emboldened disabled ice cream lovers in Atlanta to stick it to The Man and, who knows, led to a riot or something. Thomas had to take swift action, as the Atlanta Journal-Constitution reports:

Thomas...grabbed Walker's wrist and twisted her arm, causing her to fall to the concrete, unable to get up on her own, Walker said...An ambulance was called to transport Walker to Grady Memorial Hospital, where she received treatment for a shoulder injury sustained when she hit the ground, Grossman said.

After her release from the hospital, Walker got to spend the night in jail for no reason, because the charge against her was dropped. Oh, and because she didn't do anything illegal.

A letter from the Atlanta Citizen Review Board, which examined Walker's complaint, suggests that Thomas enjoys arresting people for disorderly conduct: 27 out of 38 arrests he made in a five-month period were for that very crime, in fact. This is "three times the amount made by two other officers that patrol the same area, during the same shift," the AJC reports.

The APD hasn't determined whether to discipline Thomas or pressure his colleagues to make more disorderly conduct arrests of disabled people with sweet teeth.

Looks Like A Police State To Me!~ Pam Suggs

Looks Like A Police State To Me! What do you think? Pam Suggs

Permalink Reply by Pam Vredenburg on September 24, 2011 at 7:12am
That is right but he won't & he will do this again Untill someone stops him one day! EXPOSED!

There are some people who are just plain nasty, and he's one. They get their kicks by making other peoples life's miserable. The police force attracts such people.