FBI raids homes of Occupy protesters in Oregon and Washington

Over the last month, heavily armed “domestic terrorism” units of the FBI used battering rams and stun grenades to conduct early-morning raids on the homes of political protesters in Seattle and Olympia, Washington and Portland, Oregon. On July 25, three homes were raided in Portland alone and, since July 10, as many as six homes have been raided.

These raids are only the latest in an emerging pattern of similar raids conducted by the Obama administration in order to terrorize, suppress and chill political dissent, in flagrant violation of the US Constitution and Bill of Rights.

“The warrants are sealed,” FBI spokeswoman Beth Anne Steele told theOregonian newspaper, “and I anticipate they will remain sealed.” Steele described the raids as part of an “ongoing violent crime” investigation, which is related to the recent Occupy May Day protests, during which a number of minor acts of vandalism allegedly took place.

At 6:00 a.m. on July 25, Dennison Williams was asleep in his Portland home when FBI agents smashed down his door without warning with a battering ram and threw flash or stun grenades into the building. FBI agents armed with assault rifles then stormed into Williams’ bedroom, pointed their rifles at him while they handcuffed him, and forced him to sit in a chair for a half an hour without pants on while they searched his apartment.

Neighbors described yelling and multiple loud bangs and saw swarms of agents in body armor using a battering ram against the front door of Williams’ home. Similarly disproportionate displays of force and violence were involved in the other raids.

According to the Oregonian, a search warrant was left behind during one of the raids (available here). The warrant indicates that the agents were seeking, among other items, “anti-government or anarchist literature or material” and “documentation and communications related to the offenses, including but not limited to notes, diagrams, letters, diary and journal entries, address books, and other documentation in written or electronic form.”

In one of the raids, eyewitnesses reported as many as 80 agents in body armor, wearing military fatigues, and armed with assault rifles participating in the raid. No arrests were made in any of the raids, but as many as six protesters have been subpoenaed to appear before grand juries. Two of the subpoenaed protesters, Williams and Leah Plante, 24, read a statement outside the courthouse on August 1: “This grand jury is a tool of political repression. It is attempting to turn individuals against each other by coercing those subpoenaed to testify against their communities. The secret nature of grand jury proceedings creates mistrust and can undermine solidarity. And imprisoning us takes us from our loved ones and our responsibilities.”

Williams and Plante declared their intentions to refuse to answer questions on the basis of their constitutional rights.

The “Pure Pop” record store, where Ms. Plante worked, issued a statement on its web site: “We at Pure Pop are unaware of the specifics of Leah’s current legal troubles but in her time at Pure Pop Records she demonstrated high character and integrity. We wish her luck, safety and perseverance.”

While the World Socialist Web Site has fundamental political differences with the various anarchist elements active in the Occupy protests, we unreservedly defend the democratic rights of these groups and individuals, and we demand an end to the campaign of intimidation and repression against them.

This is not the first of such raids that has been carried out by the Obama administration. In September 2010, the administration ordered raids on the homes of leaders of the Anti-War Committee (AWC) and the Freedom Road Socialist Organization (FRSO) in Minneapolis and Chicago, and subpoenaed 23 people to testify before grand juries.

The Minneapolis and Chicago raids were similar in form to the recent raids in Oregon and Washington: doors smashed in without warning by agents with assault rifles and body armor, inhabitants terrorized, and property scooped up and confiscated. The Obama administration justified raids using the “material support for terrorism” provisions of the USA PATRIOT Act.

In the period leading up to the recent NATO protests in Chicago in May, similar trumped-up “terror” charges were leveled against three young anti-war protesters. Also in May, five young men described as “anarchists” were ensnared in a so-called “terrorist plot” in Cleveland, Ohio.

The question arises whether the recent FBI raids in Oregon and Washington were prepared by undercover police infiltration of groups around the Occupy May Day protests earlier in the year. In the cases of the Minneapolis and Chicago raids in 2010, at least one undercover FBI spy active in preparing the raids was subsequently exposed. (See “FBI infiltrator prepared government raid on antiwar groups in Minne...”) The “terror plots” in Chicago and Cleveland also involved undercover provocateurs, who convinced the protesters to carry out the plot and even supplied them with dummy equipment to carry it out. (See “Chicago police frame antiwar activists on ‘terrorism’ charges” and “FBI provocateur ensnares Cleveland protesters in ‘bomb plot’”)

The gravity and seriousness of the Obama administration’s issuance of warrants to search homes for “anti-government literature or material” cannot be understated. It suggests that possession of such literature is now being considered evidence of criminal activity or “terrorism.”

The Obama administration’s decision to target political protesters for “anti-terror” operations signals that the police-state measures implemented in the so-called “war on terror,” ostensibly to fight Al Qaeda, are actually being utilized against domestic political dissenters, labeled “terrorists.” In the years since the launch of the endless so-called “war on terror,” all legal restraints have been removed on what can be done to someone labeled a “terrorist.” The Obama administration has openly asserted the power to unilaterally assassinate such individuals.

The American ruling class knows that its policies of brutal austerity, unending attacks on wages and living standards, and continual wars and occupations abroad will eventually encounter popular resistance. But the ruling class is determined to continue to pile up fantastic fortunes at the expense of the rest of society no matter the cost. As far as this layer is concerned, no form of political repression is too abominable to be used to protect the privileges and obscene wealth of the tiny few at the top. 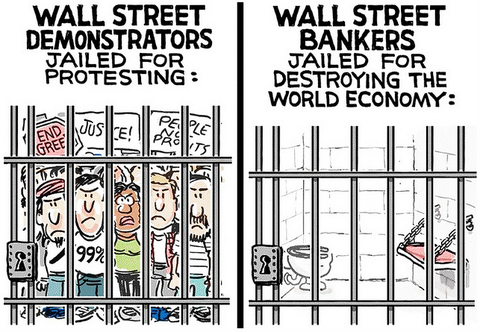 For Obama (advertised as a “constitutional lawyer”) and the rest of his regime, elementary, centuries-old democratic protections—such as the First Amendment right to free speech and the Fourth Amendment right to be free from unreasonable searches and seizures—count for nothing. With the unconditional backing of the ruling class, the Obama government routinely imprisons, tortures, and murders its opponents abroad; asserts the unlimited power to do the same to US citizens; and conducts illegal warrantless spying against millions of ordinary Americans on a daily basis.

The ramped-up raids on the homes of Occupy protesters are further refutation of the conception, advanced during the Occupy protests, that the Obama administration and the Democratic Party can be “pressured” by popular demonstrations into reversing their policies. The response of the ruling class and both of its political parties to popular demonstrations is not reform, but dictatorship and repression.

This is why I have armed myself, and say bring it on, and is the reason I still post on FB can't arrest us all