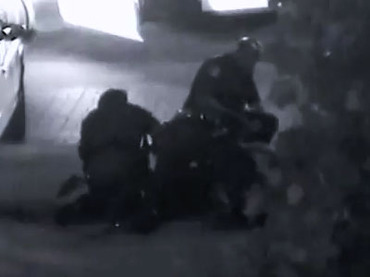 Monday marked the first day of a preliminary hearing that will go on to determine if there is enough evidence for two Fullerton cops — Officers Manuel Ramos and Jay Cicinelli — to be ordered to stand trial for the May 5, 2011 beating of Thomas. Ramos was charged last year with second-degree murder and Cicinelli with involuntary manslaughter — both have plead not guilty.

As spectators sat through 30 minutes of grainy black and white footage, Judge Walter Schwarz momentarily ordered that the film be paused so that some in the court could be excused to compose themselves.

Despite the subpar quality of the footage, Ramos is clearly seen shaking his fist in front of Thomas, a known drifter and documented schizophrenic, insisting that he was about to “fuck him up.” Cops were on the scene to investigate a call of car break-ins when they discovered a shirtless Thomas and began questioning him. When Thomas walks away from Ramos after being questioned, he is assaulted with batons, Tasers and fists by a crew of cops that eventually turns into a crowd of five.

Describing his own actions, Officer Cicinelli is recorded on tape in the aftermath to explain, "We ran out of options so I got the end of my Taser and I probably…I just started smashing his face to hell.”

Elsewhere on the tape, Thomas is heard pleading for his life. The recording captures the man crying out "OK man, I can't breathe," "I'm sorry, dude, I'm sorry!" and "Dad, they're killing me, dad … daddy!" before he lost the ability to communicate.

An evidence photo of beating victim Kelly Thomas in hospital, as it was shown during a preliminary hearing on his death in court in Santa Ana (REUTERS/Joshua Sudock/Pool)

By the time the bloodied, unconscious body of Thomas was delivered to a local hospital, doctors determined that he suffered multiple broke bones in his face, several cracked ribs and a crushed thorax. Physicians also figured Thomas to have choked on his own blood during the incident. After five days on life support, Thomas passed away.

Last year, Ron Thomas, father of the deceased, told CNN that he won’t settle “for anything here except for complete justice for my son.” Despite the evidence that has Americans across the country accusing the Fullerton, CA cops of excessive force, however, reparation might not be easy to receive — attorneys for the defendants maintain that their clients were in the right.

In defense of Officer Ramos, attorney John Arnett asked a University of California, Irvine surgical trauma chief to take the stand and explain how physicians handled Thomas’ injuries. "The cause of death might be the treatment he got [at] the hospital?" Barnett asked Dr. Michael Lekawa.

The Los Angeles Times reports that Dr. Lekawa was originally concerned over a medical error on the hospital’s end, but all that changed once he saw the footage.

"They did everything right," Lekawa testified to the court in explaining the hospital’s handling of Thomas.

According to Reuters, Fullerton fire Captain Ron Stancyk, a paramedic that was called to the scene, tended to injuries incurred by the officers themselves upon arrival. Testifying in court this week, Stancyk says that none of the officers alerted him of Thomas, near death, when he arrived.

Judge Schwarz is expected to announce soon if he feels as if there is enough evidence to bring the officers to trial. If Officer Ramos is convicted, he faces a maximum penalty of 15 years-to-life in jail; Cicinelli could end up with as little as four years behind bars.