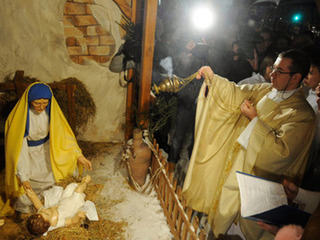 The majority of those who took part in the poll "What Do Christians Really Believe about Christmas", 83 percent, are sure: Jesus was not born on December 25.

96 percent of those polled described themselves as Christian. 82 percent reported they have been a Christian for more than 10 years, and 79 percent stated they had read the entire Bible at least once. Females made up 60 percent of the respondents.

The survey was conducted by King James Bible Online encouraging visitors to read the Bible online. According to the website, 65 percent of its readers are US residents.

Christian Today reported that while the majority of the respondents replied they don't believe Jesus was born on Dec. 25, 71 percent said they think Christians should still celebrate Christmas. One-quarter of the respondents said "No", however.

Meawhile, when asked whether it's "OK to let kids believe in Santa Claus" 64 percent answered, "Definitely not, it's a lie."28 percent replied, "Yes, it's just for fun."

Earlier this year the Pope argued in his new book that the Christian calendar is based on a miscalculation and is therefore wrong.

Pope Benedict XVI suggests Jesus was born several years earlier than is commonly thought. In the final instalment of the Pope’s “Jesus of Nazareth” trilogy dedicated to Christ’s infancy, the Pope writes of an error made by 6th century monk Dionysius Exiguus or Dennis the Small, who “made a mistake… by several years” calculating the beginning of our calendar.

"The actual date of Jesus’ birth was several years before," the pontiff claims.

The concept is not new. Many historians and scholars agree with Pope Benedict XVI, believing Jesus Christ was born sometime between 6BC and 4BC.