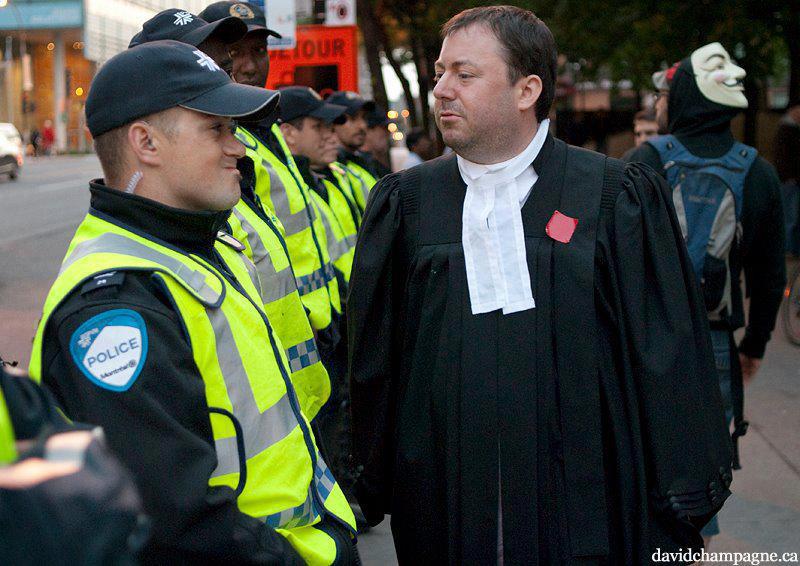 MONTREAL — As negotiations between student leaders and the provincial Liberals resumed in Quebec City Monday evening after a supper break, more protests took place in different parts of Quebec including Montreal, which hosted its 35th consecutive night of demonstrations.

Lawyers dressed in their courtroom gowns paraded in silence from the city’s main courthouse through the streets of Old Montreal to join the nightly march.

“It is one of the first times I’ve seen lawyers protest in public like this…and I’ve been practising for almost 30 years,” Bruno Grenier said outside the building surrounded by about 250 people, some carrying copies of the Canadian Charter of Rights and Freedoms. 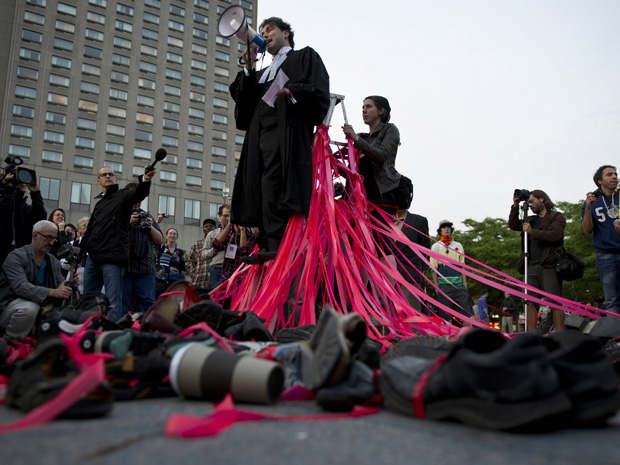 The lawyer said his colleagues wanted to show the public that they oppose a law they “find unjust and which is probably unconstitutional.”

‘What’s changed? Now the pressure is on the government’

Along the route they were greeted by claps of support and people shouting “merci.”

As they arrived at a downtown park, bystanders surged to shake their hands. Organizer Remi Bourget addressed the crowd using a loud speaker before the legal protest ended.

The nightly demonstration then began with people walking through the streets banging pots and pans. The Montreal police quickly declared the march illegal, prompting a big cheer from the crowd. Police said the march could continue as long as no criminal acts are committed.

Hundreds of lawyers march in the streets of Montreal Monday.

A two-week period marked by burgeoning protest and bitter recrimination now entered a new phase Monday, with Quebec student leaders back at the negotiating table with the provincial government.

‘We will certainly refuse to have negotiations all night long’

The Quebec City negotiations are the first face-to-face meeting between student leaders and government officials since mid-May.

Talks had broken off when the government tabled emergency legislation aimed at controlling the protests. The move appears to have backfired, however. Festive and largely peaceful demonstrations have spread to other cities — in some cases even outside Quebec and Canada.

As they entered the meeting, students said they expected the government to compromise on the key issue of tuition increases that sparked their movement in the first place. They said any solution would include two elements: a retreat on tuition fees and on the emergency law, Bill 78.

The student leaders also warned that they won’t be pressured into hastily accepting a deal this time. A few weeks ago, the sides emerged from an all-night negotiating session with an agreement that was ultimately rejected by voters at student assemblies.

The students are now saying they have more leverage, and less pressure, than they did the last time. At the time, school semesters had been at risk of being cancelled but they have since been paused and will resume in mid-August.

The government, on the other hand, has a more immediate worry: that a prolonged dispute will cause chaos for tourists heading to take in Montreal’s big summer festivals.

“What’s changed? Now the pressure is on the government,” Martine Desjardins, one of the student leaders, said on her way into the meeting.

“All the students have their session suspended… and they can wait until autumn. But the government, they have pressure.”

She said her group, the more moderate university students’ federation, was willing to spend all week negotiating in Quebec City.

A representative of the more hardline CLASSE group offered a similar take.

Gabriel Nadeau-Dubois, a co-spokesman for the group, quipped that there would be no repeat of what happened earlier this month; back then, students were told during an evening, night and morning of talks that nobody could leave until there was a deal.

“We will certainly refuse to have negotiations all night long. We will ask — and we will take — breaks to eat and sleep if it’s necessary,” Nadeau-Dubois said.

“I mean, after 106 days of strikes it’s not a question of minutes. I think we can do a little nap.”

Hundreds of prosecutors march against the Quebec government's Bill 78 Monday night in Montreal. Since February hundreds of protesters have been arrested in protests against a planned increase in tuition fees.

He said students hoped the renewed talks would be more than a public-relations exercise. A common accusation opponents have levelled at the Charest government is that it has allowed the dispute to fester for its own political gain.

Polls in recent months had repeatedly suggested that most Quebecers support the fee hikes. Those same polls suggest, however, that Quebecers also want to see the sides negotiate. So there have been several negotiating sessions this spring, without any hint of a climbdown on tuition fees.

The government says it has acted in good faith, and cites several examples.

Over the last few months it has moved to slow the implementation of fee hikes; strengthen loans and bursaries; involve students in a new body to monitor university spending; and reduce school fees outside of tuition.

Montreal’s peak tourist season is fast approaching and there are hints that a faction of the protest movement will seek to disrupt the Formula One Grand Prix.

That car race, in two weekends, is the first of several big events that usually fuel the local economy in the summer, followed by the comedy, jazz and francophonie festivals.

You would think that when assessing the brutal silencing of dissent through the ages, the Romans’ crucifixion of Jesus would rank right up there.

But Ryan Fea, a United Church delegate, has news for you: Pontius Pilate had nothing on Quebec Premier Jean Charest. Mr. Fea explained to The Gazette  why the church’s Montreal and Ottawa Conference adopted a motion Sunday denouncing emergency legislation introduced by the Liberal government to address the three-month student strike.

“In our sacred scriptures, we as Christians see Jesus riding on a donkey into Jerusalem, surrounded by his faith community expressing their beliefs, and he did not have to give eight hours’ notice to the Romans,” Mr. Fea said. “He was making a very strong political statement that wasn’t quelled or quashed by his government.”

Among the provisions in Bill 78, passed May 18, is a  requirement for the organizers of demonstrations involving 50 people or more to advise police at least eight hours beforehand of their plans. Police may require changes if the route “poses serious risks for public security,” the law states.

This is hypocrisy on a grand scale.  It was those damned lawyers that created this Canadian fiasco in the first place!

The Canadians I know, and there are many, aren't stupid enough to buy any of this poppycock publicity.  The lower 48 ought to pay close attention to their example ... we could sure use a clean-up ourselves ...