The Obama campaign is taking a new approach in dealing with claims by so-called “birthers” who claim President Obama was not born in the United States. They are selling campaign buttons for $5 with the words “Made in the USA” printed on the top — and a portion of a “Certificate of Live Birth” for Barack Hussein Obama on the bottom.

“There‘s really no way to make the conspiracy about President Obama’s birth certificate completely go away, so we might as well laugh at it — and make sure as many people as possible are in on the joke. Get your Obama birth certificate Made in the USA button today,” Obama’s official websitereads. 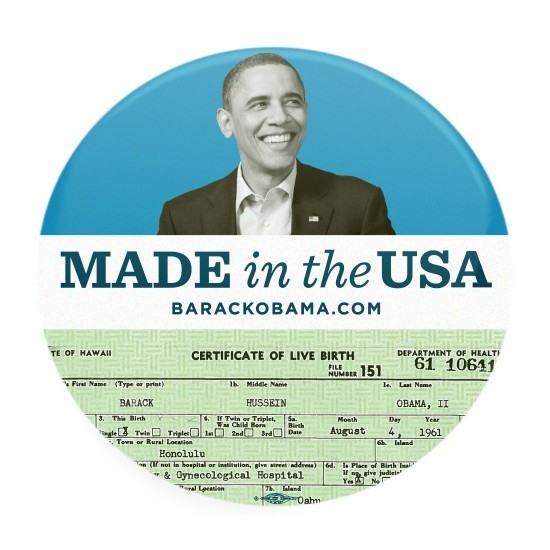 At this point, it does not matter whether he was actually born in the United States. “It is what it is”, and he’s been in office for 3.5 years, and he’s done his damage. Even if it were proven that he violated the criteria for the Office of the Presidency, there is not a whole lot we can do about it now. I mean, it is not like we can get restitution for the 5 trillian and climbing debt he put on this country….but imagine that, asking a black man for restitution?

Nope, this is where we are…we have to hammer his record while in office….the “birther” thing is a dead end road and the longer we dwell on it and talk about, the less time we have to talk about his record….which really won’t take long, because he doesn’t have a very good record.

When you dig into it you learn that in the early days of Hawaii’s statehood native persons could walk in and say they needed a “Certificate of Live Birth” their records. These were issued with no questions asked. They are not “Birth Certificates”, issued only by hospitals, as we know them in the traditional sense.

CO: and don’t forget that mom and alleged daddy met while taking a Russian language class. Rather an unusual course of study in those days when Communists controlled Russia . They were America’s greatest enemies and had vowed to destroy us . So many clues to Obama’s upbringing – so conveniently ignored by the Lefty International set who controls the media and our White House. The Media got him elected. The Media still covers for him .

Under the Constitution of the United States… Natural born citizen was written in by the founders to prevent foreign nationals the ability to run for President or V.P. This was to avoid America being taken over by corrupt leaders (from other Nations) who did possess American values. Obama’s Dad…never was…, nor ever wanted to be a citizen of the U.S. This makes Obama ineligible for the Presidency or V.P. He can run for any office, but not those two (2) offices. His kids…are eligible, not Barry. Why are we silent in this great fraud? The conversation should be directed to his fathers birth certificate…not where Barry was born!! Can we have someone ask that question? Where is the Attorney General protecting our Constitution…Oh right,…he’s defending the Taliban, Illegals, and Black Panther’s.

HA HA HA – Whatta joke. It’s perfect that this POS shows a snippet of “a” birth certificate – exactly like the PARTIAL certificate that was originally given and later RE-RELEASED as though it was something different and complete. WE ALL F’ING KNOW that a non-citizen was allowed to take the office and wallow it down into a worldwide bowing, bumbling, dictatorial embarrassment. A skidmark in American history. YOU HAVE GOT TO SEE this guys’ “tribute” to Neil Armstrong! Look it up – the picture will kill you. It is almost as colon-wrenchingly pathetic as is Obama’s BOWING to foreign leaders and even a mayor of a U.S. city. Anyone who can vote for this person – wow – I can’t imagine living with that much stupidity or deliberate control-hungry evil loose inside of me.PRObama? You know where to shove it.

Actually folks… what we need to do – is politely ask for Mr. Romney’s birth certificate!!!! (He quipped how nobody had asked for his? and the Obama people flipped!) So we ask him for his… and then we say Mr. PRESIDENT… Mr. Romney GLADLY gave us HIS birth Certificate… and COLLEGE RECORDS… WHERE ARE YOURS????

His mother was not married to his father at the time of his birth because “daddy” was currently married to his second wife………….so back in those days the mother of child did not simply “give” the child the last name of the father. Perhaps the name of the legal birth certificate is the mother’s maiden name.
And then there is always the question of the name change to Barry Soetoro who attended two colleges in the USA as a foreight exchange student. (Did he give up the USA citizenship ?)
And then there is the question of where is the legal name change to Barack H. Obama ?
Anyone at the Democratic Nominating Committee care to clear up this “little” problem for the history books ?

Really? Is that made in Connecticut or Hawaii?
How about Barry unseals his school records and then Mitt can release his tax records? I am amazed Chrissie et al don’t stop to wonder about that, except then they couldn’t go on pretending their messiah is the smartest president ever. And if the smoke signals are right, they would have to explain why our ‘American Made’ President was provided non citizen funds for school… it’s either a lie he told for personal gain, or a truth that makes him ineligible for the office he holds.

But no one in the media wanted to be the next Watergate heroes if it meant taking down their chosen savior. That has to be one of the best swindles of the media ever– if someone had done honest journalism and answered the questions we still have 5 years later, they could have helped usher in the first femal president… not like it was going to guarantee a ‘progressive republican’ would take the office.

it doesn’t matter any more, but when your still blinded friends whine and moan about tax records, point out that Obama paid something like 17% in taxes… he paid less than docs I know who made less than half of his income… funny he cannot even pay the maximum amount he is ‘supposed to pay’ while wanting the rest of us to pay… and then remind them of the missing school records, and when their boy puts up, ours will.

“Obama is ineligible for multiple reasons:
1. Not a ‘natural born citizen’ as required by Article 2, Section 1.
2. Born a British citizen pursuant to British Nationality Act of 1948.
3. Law enforcement has concluded his birth certificate is fraudulent.”[1]

“We hold these truths to be self-evident, … that they are endowed by their Creator with certain unalienable Rights, … Life, Liberty and the pursuit of Happiness.” – Declaration of Independence

Obama routinely omits ‘Creator’ when speaking of these rights. No ‘Creator’ = no ‘unalienable’ rights! He loathes liberty and our Constitution!

Don’t omit Art 2, Sec 1, of the Constitution when speaking of Obama. Restore economic sanity, limited government and adherence to our Constitution!

2. Demand Congress depose and prosecute Obama, along with his co-conspirators! Any politician or judge refusing this duty in violation of their oath of office, should also be regarded as a co-conspirator and similarly deposed or voted out of office.

3. Boycott complicit mainstream media advertisers and inform them you detest their enabling the worst cover-up in American history!

“They are selling campaign buttons for $5 with the words “Made in the USA” printed on the top — and a portion of a “Certificate of Live Birth” for Barack Hussein Obama on the bottom.”

I presume it is the part of the falsified birth certificate? Is Hillary Clinton going to buy a button. She started it all. Remember the comradress in your camp? Geesh, what a skin flint, nickle and diming everybody. Please Sir, can you spare a dime for my campaign? I can’t use the stimulus trillions that mysterioulsy disappeared as everyone would know. Wouldn’t they? So that is for plan B, if the dam- colonialists don’t vote for me. hmmmm hmmmm hmmmm Hey just fulfillig the dreams of my father, yes I have the audacity to follow the handler’s bidding.

Not Happy Campers At All!

Sorry I had to show Obama New Bottom :) Sad~