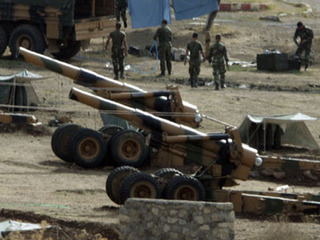 Turkey’s military continues to shell Syria while the government awaits parliamentary approval for military operations on its neighbor’s territory after five Turkish civilians were allegedly killed by casual fire from Syria.

Several Syrian soldiers have been killed in artillery shelling from Turkish territory on Thursday night, reports the London-based Syrian Observatory for Human Rights

Ankara has confirmed it is firing on positions of the Syrian military. Artillery strikes have been made early on Thursday morning targeting the Tel Abyad district 10 km inside Syrian territory.

Turkish authorities have written to the UN Security Council on Thursday about the alleged shelling of its territory from Syria.

In a letter addressed to the United Nations Secretary-General Ban Ki-moon, Ankara classifies Syria’s actions as “an act of aggression from Syria against Turkey” and has demanded measures be taken against Damascus to ensure the territorial integrity and security of Turkey.

Spokesperson for the US State Department Victoria Nuland has called on to Russia to “use its influence on the Assad regime” and said Washington will continue co-operating with Moscow in search of a solution to the Syrian crisis, which the US understands as transition of authority from President Bashar al-Assad.

Damascus has already offered its condolences to the Turkish people and said the incident is being investigated. The government of Bashar al-Assad proclaimed it respects the sovereignty of neighboring countries and urged "states and governments" to act wisely and rationally.

The incident with alleged accidental mortar shelling is extremely untimely for the Syrian regime which has just managed to halt the trend towards further escalation of terrorist threat in the country. The latest reports from Syria suggest that the foreign-sponsored militants are suffering heavy losses as the regular army cleans up quarters in the cities and prevent mercenaries from intruding into Syria from neighboring countries, mostly from Turkey.

In the meantime Israel has reportedly evacuated hundreds of tourists from the occupied Golan Heights after several dozen armed militia approached the border controlled by the UN peacekeepers.

The militants, taken for a group of Syrian rebels by the Israeli military, stopped a mere 500 meters from the border, which has been intensively fortified by the Israeli army’s Corps of Engineers over the last two weeks.

The Israeli military began constructing additional trenches, barbwire and minefields on the border with Syria after several mortar mines were fired on to Israeli territory from Syria a couple of weeks ago.

The Chief of IDF General Staff Lt. Gen. Benny Gantz has stated that Syrian “President Bashar Assad is losing control of the country which, in the result, might become a huge military warehouse for terrorist organizations.”