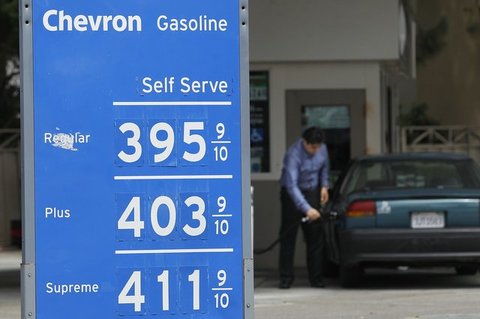 A surprise surge in gasoline prices is taking some of the fun out of summer.

The national average for a gallon of gas at the pump has climbed to $3.67, a rise of 34 cents since July 1. An increase in crude oil prices and problems with refineries and pipelines in the West Coast and Midwest, including a fire in California, are mostly to blame.

Analysts don’t expect gas prices to get as high as they did in April, when 10 states passed $4 a gallon and the U.S. average topped out at $3.94. But this is still unwelcome news in this sluggish economy, since any extra money that goes to fill gas tanks doesn’t get spent on movies and dinners out.

The rising prices could also put pressure on President Barack Obama in the heat of his re-election campaign.

When Phil Van Schepen recently went to fill up his dry-cleaning delivery van in Coon Rapids, Minn., he found a Post-it note a driver before him had placed on the pump faulting Obama for high gasoline prices.

“It’s a reminder of his energy policies overall, which I don’t agree with,” said Van Schepen, who buys about 100 gallons a week and finds he is spending about $40 more than he did in early July. Still, he said the Post-it “was a bit much” because the president isn’t responsible for gasoline prices.

Analysts and economists agree, saying prices for crude oil and wholesale gasoline are set on financial exchanges around the world based on supply and demand and expectations about how those factors may change.

The price at the pump in the U.S. fell more than 60 cents per gallon during the spring as the global economy slowed and turmoil in the Middle East seemed to subside.

But crude oil is climbing again, rising to $94 a barrel from a low of $78 in late June. Production outages in South Sudan and the North Sea, Western sanctions that have cut the flow of Iranian oil, Iran’s threat to block tankers passing through the vital Strait of Hormuz, and fears that the violence in Syria could escalate into a wider regional conflict have driven up oil prices.

In the past few weeks, pipelines serving Wisconsin and Illinois ruptured, refineries were shut down unexpectedly because of equipment problems in Illinois and Indiana, and a blaze broke out at a refinery in Richmond, Calif.

Gasoline prices shot up more than 50 cents in the span of a month in Indiana, Vermont, Illinois, Ohio, Kentucky, Michigan and Wisconsin. And California drivers have seen gas climb 13 cents since the fire Monday. Motorists in many cities there are paying well over $4.

Drivers in 20 states, including the possible White House battleground states of Colorado, Iowa, Nevada, Ohio and Wisconsin, are paying more for gasoline this year than they did last year, and the list will probably soon include Virginia and North Carolina, said Tom Kloza, chief oil analyst at the Oil Price Information Service. The national average a year ago was $3.64.

“If you are paying more than in the past, it does have the potential to hurt the president,” Kloza said.

Economists said the price bump probably won’t have much of an effect on economic growth, at least not yet. The extra 34 cents a gallon translates to $33 per month for a typical household.

What determines the price of gasoline? When an oil producer sells to a refiner, they generally agree to a price set on an exchange such as the New York Mercantile Exchange. After the oil is refined into gasoline, it is sold by the refiner to a distributor, again pegged to the price of wholesale gasoline on an exchange. Finally, gas station owners set their own prices based on how much they paid for their last shipment, how much they will have to pay for their next shipment, and, perhaps most importantly, how much their competitor is charging.

Gas stations make very little profit on the sale of gasoline. They want to lure drivers into their convenience stores to buy coffee and soda. Oil companies and refiners have to accept whatever price the market settles on – it has no relation to their cost of doing business. When oil prices are high, oil companies make a lot of money, but they can't force the price of oil up.

Are oil prices manipulated by speculators on Wall Street?

Are politicians to blame for high prices?

Are prices high because the world is running out of oil?