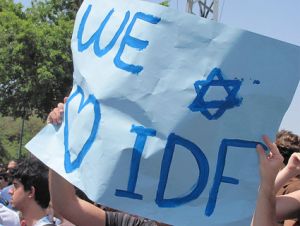 Leave it to the Washington Post's award-winning national security reporter, Walter Pincus, to put things in perspective. In a new column, Pincus points out a remarkable inequity: While the US faces a fiscal crisis and debates the need for defense cuts, it's footing the bill for one-fifth of Israel's military budget—even as that country cuts its own defense spending to tackle domestic economic ills. You know, the way we always talk about changing our country's budget priorities. Pincus writes:

Nine days ago, the Israeli cabinet reacted to months of demonstrations against the high cost of living there and agreed to raise taxes on corporations and people with high incomes ($130,000 a year). It also approved cutting more than $850 million, or about 5 percent, from its roughly $16 billion defense budget in each of the next two years.

If Israel can reduce its defense spending because of its domestic economic problems, shouldn't the United States—which must cut military costs because of its major budget deficit—consider reducing its aid to Israel?

First, a review of what the American taxpayer provides to Israel...

Pincus then raps off an impressive list of the ways in which US dollars, considered so precious these days by politicians on both sides of the aisle, are peeled off to keep the Israeli economy and military machine afloat. Among those revelations is an account of Congress' "qualitative military edge" requirement, which mandates that any US sale of arms in the Middle East must not adversely affect Israel's advantage over its enemies in the region. "The formula has an obvious problem," Pincus writes: "Because some neighboring countries, such as Saudi Arabia and Egypt, are US allies but also considered threats by Israel, arms provided to them automatically mean that better weapons must go to Israel. The result is a US-generated arms race."

And, of course, Israel gets favorable terms on its US arms purchases. I'd criticize this scheme, but conservatives and US-based weapons manufacturers would probably just reframe the debate: "The Israel Defense Forces: America's Real Job Creators!"