400 US troops to deploy to Egypt 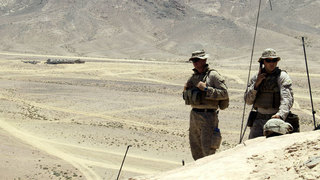 More than 400 US soldiers are preparing for their deployment to Egypt in anticipation of violent protests, riots, and the possibility of having to protect the country’s border with Israel.

Training at Fort Hood for a nine-month deployment in the “near future” concluded on June 20, KCEN-TV reports, noting that the soldiers encountered Molotov cocktails and “other dangerous items” in their training.

“Just what I’ve seen over the course of the past week, this unit is already far more ready for this type of threat than we were last week,” Lt. Matthew Wilkinson told the television station. According to KDH News, the training lasted about six months.

“We want to be as professional as possible so that whatever situation we may encounter, [so] the opposing force knows that we mean business and we know what we’re doing,” said PFC Perez Alexander.

Troops from 13 nations, including the 400 from the US, will man posts and security checkpoints along the Sinai Peninsula, report any peace treaty violations between Egypt and Israel, and be prepared to respond to threats.

A spokesman of the Egyptian armed forces on Saturday confirmed that 400 US troops will be deployed to Egypt, Ahram Online reports.

"The 400 US soldiers coming to Egypt as mentioned in the media are part of the periodical renewal routine for the US faction of the 13-state multinational force deployed in Sinai since the peace treaty. They are not armed with military operations gear," said spokesman Ahmed Ali on behalf of the Egyptian military.

“We are providing this clarification as we respect the right of the great Egyptian people to know the truth from its original sources and to prevent distortion of information by any instigators,” he added.

Anti-government protests calling for the removal of Egyptian President Mohamed Morsi are scheduled to occur on June 30. Since the 2011 uprising that removed former president Hosni Mubarak from power, the Sinai Peninsula has suffered growing unrest and disorder, but Egypt’s military presence there is limited under the 1979 Egypt-Israel Peace Treaty. The treaty required that Israel’s armed forces withdraw from the Sinai Peninsula, which the Jewish state had captured in 1967. Egypt was required to keep the area demilitarized, but in during widespread 2011 protests, Israel agreed to allow several hundred Egyptian troops into the region.

The Multinational Force and Observers (MFO), which is made up of international peacekeepers from 13 countries, ensures that Israel and Egypt abide by the treaty and avoid a military build-up along the border. The MFO operates checkpoints, observation posts, and patrols the border. The observers also verify the terms of the peace treaty at least twice a month, and ensure free marine navigation in the Strait of Tiran.