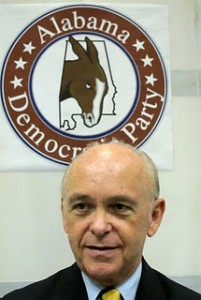 A man from Birmingham, Alabama is filing a lawsuit in the Jefferson County Circuit Court to keep Barack Hussein Obama off of the Alabama ballot, citing problems with Obama’s birth certificate.

According to the affidavit, Albert E. Hendershot, Jr is requesting that there be an “evidentiary hearing and production of the original long form birth certificate and microfiche copy of such original birth certificate of Barack Hussein Obama to be presented at the hearing.”

The lawsuit also requests that there be an injunction issued against Mark Kennedy, Chairman of Alabama Democratic Party,  to keep Obama off the ballot. In addition, it requests that Alabama modify the “rules/ regulations for candidate eligibility verification/authentication, in order to stop elections fraud and forgery and assure the citizens of Alabama integrity of the elections process.”

Albert E. Hendershot, Jr backs up the affidavit with an appeal to Article II, Section I of the U.S. Constitution: “No person except a natural born Citizen, or a Citizen of the United States, at the time of the Adoption of this Constitution shall be eligible to the Office of President…” In addition, Mr. Hendershot appeals to Minor v. Happersett, a lawsuit from 1875 concerning women’s suffrage,  which is cited in federal court to define citizenship and defines a citizen as “being born of citizen parents within the jurisdiction of the United States.” Hendershot states that “Obama is not eligible to be POTUS as his father, Barack Obama Sr., was a British Subject at the time of his birth and  not a citizen of the United States.

According to his Facebook Page, Albert Hendershot is owner and president of Innovative Portfolio Recovery Inc., “ a Debt Collection and Skip Tracing Firm, located in Birmingham, Alabama.”

This week, WND.com paid to fly a banner over a NFL game between the Dallas Cowboys and the New York Giants, asking, “Where’s the Real Birth Certificate?”

Time will tell whether this new challenge to the eligilibity of Barack Obama will stand. This issue is not going away, however, and Barack Obama can expect many more of these types of legal challenges in the year running up to the 2012 election.