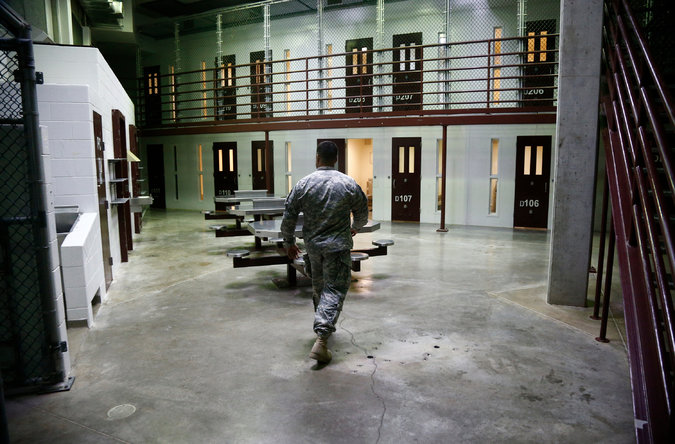 A federal appeals court ruled Tuesday that judges had the power to oversee complaints by detainees about the conditions of their confinement at the military prison at Guantánamo Bay, Cuba. The ruling was a defeat for the Obama administration and may open the door to new lawsuits by the remaining 155 Guantánamo inmates.

In a two-to-one decision, a panel of the United States Court of Appeals for the District of Columbia Circuit held that courts may oversee conditions at the prison as part of a habeas corpus lawsuit. The ruling overturned lower court decisions that judges could not oversee such matters.

At the same time, the court rejected a request by three detainees on a hunger strike at Guantánamo for an injunction barring the government from force-feeding them by strapping them into a restraint chair, inserting a gastric tube through their noses and pouring a liquid nutritional supplement into their stomachs.

Judge David S. Tatel wrote that “absent exceptional circumstances prison officials may force-feed a starving inmate actually facing the risk of death.” He added, “Petitioners point to nothing specific to their situation that would give us a basis for concluding that the government’s legitimate penological interests cannot justify the force-feeding of hunger-striking detainees at Guantánamo.”

Still, because the majority concluded that the judiciary had the authority to review such claims, it sent the case back to Federal District Court for further consideration.

Jon Eisenberg, a lawyer for the prisoners, celebrated the larger reach of the ruling as a “huge win” for those seeking greater judicial oversight of how the military treats detainees.

“This decision establishes that the federal courts have the power to stop the mistreatment of detainees at Guantánamo Bay,” Mr. Eisenberg said. “The Court of Appeals has given us the green light to continue our challenge to the detainees’ force-feeding as being unconstitutionally abusive. We intend to do that.”

Among other things, he added, the government, after the Oct. 18 oral arguments in the case, revised its procedures for using restraint chairs in the force-feeding, but has declined to let the detainees’ lawyers review those guidelines. The ruling, he said, “gives us the green light to ask the district court to order such disclosure.”

Allison Price, a Justice Department spokeswoman, said, “The department is reviewing the decision.”

If the case stands — the Justice Department could file an appeal asking the full appeals court or the Supreme Court to review it — it would be a milestone in a long-running legal battle, involving all three branches of government, over the extent to which detainees are entitled to judicial review if they are being indefinitely detained without trial at the prison.

In 2005, Congress enacted a law stripping courts of the power to hear such claims. The following year, the Supreme Court — in a case involving military commissions — ruled that the law only applied to future lawsuits.

Congress responded by passing the Military Commissions Act of 2006, which barred courts from hearing both existing and future lawsuits by detainees. Two years later, the Supreme Court ruled that detainees nevertheless could bring habeas corpus lawsuits challenging the factual basis for their detention as accused enemy combatants.

Moreover, Judge Tatel wrote, if a judge ordered the military to stop treating a detainee in some “unlawful manner,” and it did not rectify the conditions, the court said judges may then “simply order the prisoner released.”

Congress “unmistakably sought to prevent the federal courts from entertaining claims based on detainees’ conditions of confinement,” he wrote. “Such evident congressional intent would seem to counsel a cautious rather than a bravura reading” of whether such claims fell into the category of habeas corpus lawsuits.

The claims arose after a major hunger strike at Guantánamo a year ago, with a majority of detainees participating at one point, according to the military’s official count. The mass protest refocused global attention on the prison and pushed the Obama administration to revive the effort to close it.

Those who lost sufficient weight were forced to eat a nutritional supplement, a practice that revived complaints by medical ethics groups that doctors should not force-feed prisoners who decide not to eat. A similar debate erupted during the Bush administration.

Four detainees filed a lawsuit seeking to stop the military from force-feeding them. One was later transferred to Algeria, but three —Shaker Aamer, a Saudi citizen and former resident of Britain; Ahmed Belbacha, an Algerian; and Abu Dhiab, a Syrian, remain at Guantánamo. All had been approved for transfer, if security conditions could be met in the receiving country, by a 2009-10 task force.

The hunger strike dwindled in the last six months of 2013, and in December the United Sates Southern Command stopped reporting the daily count of hunger strikers. Mr. Eisenberg, who recently visited his clients, said he was told that there were 25 detainees still on hunger strikes, with 16 of them being force-fed. A military spokesman declined to confirm or deny that count.