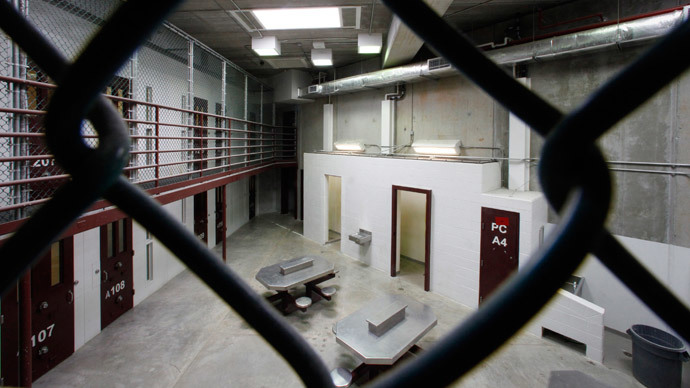 Attorneys for three foreign nationals being held by the United States at the Guantanamo Bay detention center in Cuba are claiming a partial victory following a federal appeals court ruling announced Tuesday morning in Washington, DC.

Earlier complaints made by the detainees in question regarding the conditions of their confinement at Gitmo should have been heard in district court, an appellate panel agreed in a 2-1 vote, opening the door for those inmates’ attorneys to re-challenge their clients’ ongoing detainment and the force-feeding practices they’ve been subjected to endure while protesting their lengthy incarceration by refusing to eat unless and until they are released.

At the same time, however, the US Court of Appeals for the District of Columbia Circuit said the detainees shouldn’t be awarded an injunction that would halt those force-feeding procedures, and said ensuring the men remain alive during their detainment was crucial to preserving order within the notorious military prison.

The detainees — Ahmed Belbacha, Abu Dhiab and Shaker Aamer — previously attempted to challenge the conditions of their confinement in federal court by arguing unsuccessfully that being forced-fed violated both their constitutional rights and the Religious Freedom Restoration Act. Twice, however, federal judges said the Military Commissions Actpassed by Congress in 2006 prevented those complaints from being heard.

The DC appeals court agreed differently, though, and said on Tuesday that the district judges responsible for previous decision erred with their earlier handling of the detainees’ complaints.

“For the reasons set forth in this opinion,” Judge David Tatel wrote for the majority, “we conclude that under the law of this circuit petitioners’ challenges to the conditions of their confinement properly sound in habeas corpus and thus are not barred by the MCA.”

“We also conclude, however, that although their claims are not insubstantial, petitioners have failed to establish their entitlement to preliminary injunctive relief,” Tatel added.

Jon Eisenberg, the lawyer who argued the case on behalf of the detainees, told POLITICO that "This decision establishes that the federal courts have the power to stop the mistreatment of detainees at Guantanamo Bay.”

“The Court of Appeals has given us the green light to continue our challenge to the detainees' force-feeding as being unconstitutionally abusive," Eisenberg said. “We intend to do that.”

Tuesday’s decision, Eisenberg added, “puts a large crack in the edifice of lawlessness that has surrounded Guantanamo Bay since 2002.”

“It's a good day for the rule of law in America,” the attorney told POLITICO. When reached for comment by the Associated Press, Eisenberg reportedly called Tuesday’s ruling “a big win for us”because it should allow the detainees’ cases to be heard again in district court.

In the meantime, though, force-feeding can continue as currently allowed at Gitmo, where the appeals court agreed that the US government has "legitimate penological interests” in keeping detainees alive.

"The vast majority of courts have concluded...as we do now, that absent exceptional circumstances prison officials may force-feed a starving inmate facing the risk of death." Tatel wrote for the majority.

All three men have been detained at Guantanamo for over a decade, although the US government has cleared them all for release. Attorneys for either the detainees or the government can appeal Tuesday’s ruling and ask for the DC Circuit Court’s full bench to weigh-in next, or ask the Supreme Court to consider the case.