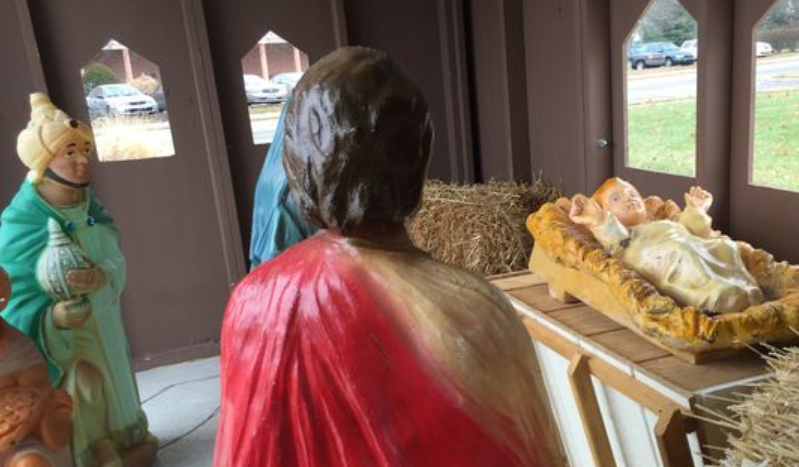 Attention thieves and pranksters considering nabbing the baby Jesus from the Indiana Masonic Home's Nativity scene: Don't do it.

New York-based BrickHouse Security, which operates a distribution center in Indianapolis, is donating several GPS monitors that will be put inside the baby Jesus and other statues on display at the Masonic Home's iconic archway.

"Our security will be contacted if it's even moved," said Jerry Loper, facilities director for the retirement community in Franklin. "We are prepared."

Baby Jesus was reported missing Dec. 7, prompting a flurry of media reports. The thieves returned the statue on Dec. 11.

Michael Stolyar, a public relations agent for BrickHouse Security, read stories about the stolen baby Jesus and contacted The Star on Dec. 12.

BrickHouse runs a "GPS Jesus" program, Stolyar said, that has been loaning satellite-tracking equipment to churches and non-profits nationwide for about nine years.

The security company ships the devices to churches and community groups free of charge, Stolyar wrote in the Dec. 12 email. "A small box embedded inside the figurine, baby Jesus in this case, automatically sends a text or email to the owner's mobile phone or computer as an alert as soon as a display is disrupted."

The Star gave Stolyar the phone numbers for officials at the Masonic Home, who were desperate for a way to keep baby Jesus and the rest of the Christmas display safe.

Loper said the nearly 100-year-old retirement community takes pride in decorating for the holidays and inviting neighbors to enjoy the beautiful campus.

"It's a nice gesture on (BrickHouse's) part," Loper said. "We want to thank this company for stepping up and (The Indianapolis Star) for making that connection."