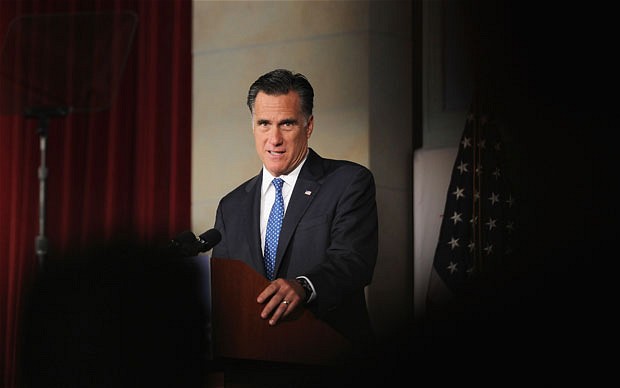 Dark horse: a short while ago, the Republican candidate Mitt Romney was not given a chance in the US election, but now the picture looks different.

Until recently, Barack Obama’s re-election was regarded as inevitable – in the same way that summer follows spring, or a monsoon follows a hosepipe ban. The president’s poll lead over Mitt Romney was strong, while the Republican’s character was assassinated by a primary fight that permanently spoiled the reputation of his party. To court the GOP’s conservative base, Romney was forced to adopt positions on abortion, contraception, health care and welfare that are thought to be unpopular among moderate swing voters. Obama, by contrast, is the man who killed bin Laden and toppled Gaddafi. A choice between Obama the moderate statesman and Romney the craven conservative is surely no contest at all.

But in the last two weeks, things have changed. Obama’s re-election is no longer guaranteed; some pollsters think it is unlikely. Day by day, the odds are improving that Mitt Romney will be the next President of the United States.

What changed? For a start, voters are getting gloomier about the economy. Joblessness remains high and debt is out of control. According to one poll released this week, only 33 per cent of Americans expect the economy to improve in the coming months and only 43 per cent approve of the way that the president has handled it. Voters think Obama has made the debt situation and health care worse. The man who conducted the poll – Democrat Peter Hart – concluded that “Obama’s chances for re-election… are no better than 50-50.”

The president has tried to distract from America’s economic misery by playing up the so-called culture war. Earlier in the year he decided that he would force Catholic employers to provide contraception to their employees through their insurance plans, and he followed that swipe at social traditionalism by endorsing gay marriage. This embrace of Sixties liberalism has backfired. While contraception and gay marriage often receive popular support in national polls, Americans are far more conservative in the voting booth. Thirty-two states have voted on gay marriage and all 32 have voted to outlaw it – even liberal California. Nor has the culture war rallied his party’s base. In presidential primaries held on Tuesday, 39 per cent of Arkansas Democrats and 42 per cent of Kentuckian Democrats rejected Obama’s re-nomination. In West Virginia, 41 per cent of the state’s Democrats voted for an imprisoned criminal rather than the president.

The result is that pollsters find Obama and Romney edging towards one another. Rasmussen puts Obama only one point ahead; Gallup calls it a tie. With Romney doing better than the president in key swing states North Carolina and Florida, Gallup has publicly stated that Obama now has a higher chance of losing rather than winning.

But it isn’t just Obama’s flaws that are making this race interesting. Mitt Romney might not be the most charismatic candidate, but that’s a hidden strength in an election that’s all about competence and getting back to the basics of what once made America work so well. This week, the pro-Obama journalist Andrew Sullivan wrote that with his wealth, good looks and apple-pie conservatism, Romney is like “a focus-group tested model president from 1965”. Sullivan obviously doesn’t realise how popular the TV show Mad Men is. Who wouldn’t warm to a candidate that represents an age marked by low unemployment, stable families and a laissez-faire attitude towards drinking at work?

In fact, the grey Mr Romney is repeating the same formula that won him the governorship of Massachusetts, an ordinarily Democrat state, in 2002. He pulled that off by motivating large numbers of Republicans to vote for him, breaking into the working-class vote and keeping turnout among Democrats fairly low. The unique genius of Romney was his ability to say very conservative things but in a manner that convinced many centrists that he didn’t really mean them. That’s happening again in 2012, as polls indicate that far more Americans think Obama is too Left-wing than believe Romney is too Right-wing.

Of course, Romney has his weaknesses. But they are fewer than Obama’s, whose charisma disguises a multitude of problems so great that it’s hard to imagine him overcoming them. Gallup makes the following observation: “Comparing today’s economic and political ratings with those from previous years when presidents sought re-election reveals that today’s climate is more similar to years when incumbents lost than when they won.” I would go one step further: Obama’s situation is actually worse than that of some of the incumbents who have lost in the past.

In 1980, Democratic president Jimmy Carter faced an uphill struggle for re-election. Yet, despite an index of inflation and unemployment far higher than Obama’s, he was actually doing slightly better in the polls. In March of that year, Carter led his Republican opponent, Ronald Reagan, by around 25 per cent. By May, Gallup gave him a lead of 49 to 41 per cent – higher than Obama’s today. Carter’s advantage evaporated in the months that followed, but he regained ground in October and by the last week he was running even.

None the less, Carter eventually suffered a landslide defeat. The scale of his humiliation was hidden by the fact that people were unwilling to commit themselves to the conservative Ronald Reagan until the very last minute. It was only when they went into the polling booth and weighed up all the hurt and humiliation of the past four years that they cast their vote against the president. It looks like Barack Obama will be the Jimmy Carter of 2012.