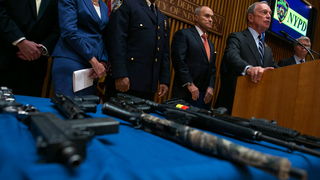 New York City Mayor Michael Bloomberg said Monday that his administration has successfully carried out the largest gun seizure in the city’s history.

At a Monday morning press conference, Mayor Bloomberg and Police Department Commissioner Ray Kelly announced that authorities in New York have managed to indict and arrest 19 individuals believed responsible for running an illegal gun pipeline from North and South Carolina to NYC along the Interstate 95 corridor.

As the result of an undercover investigation, Bloomberg said city officials netted the largest gun bust ever to come out of New York, collecting more than 250 illegal firearms, including high capacity assault weapons, a fully automatic machine gun and guns that are commonly used in violent crimes across the city.

“There is no doubt that the seizure of these guns has saved lives,” Mayor Bloomberg said at the press conference. “New York City, I’m happy to say, is the safest big city in the nation. We’re continuing to make our city even safer.”

Commissioner Kelly said the firearm pipeline was discovered last year as the result of an unrelated narcotics investigation targeting an operation thought to be trafficking drugs out of Brooklyn. That probe led investigators to a 26-year-old aspiring rapper, Matthew Best, who recorded songs from an Ocean Hill, Brooklyn recording studio in which he boasted of “packing more guns than the Air Force.”

Once Best was brought onto the police’s radar, law enforcement linked him to 29-year-old Walter Walker of Sanford, South Carolina. Walker, according to police, purchased stolen guns cheaply in North and South Carolina, and then took a discounted bus to New York City where he sold them with the assistance of Best. In one instance, police said, Walker carried as many as 14 guns in his luggage while he took public transportation from North Carolina up to New York.

“Those who were selling the guns to Walker knew they were intended for distribution in New York, and they knew that the guns were illegal in New York,” Special Narcotics Prosecutor Bridget Brennan said at the presser. Police say that 11 of the nearly 60 gun buys occurred at the Ocean Hill recording studio, and that 254 firearms in total were obtained by an undercover officer who was on the receiving end of 58 exchanges in less than a year.

Walker “had no shortage of supply or suppliers,” Kelly said, “so the NYPD made sure it was Walker’s only New York customer.”

From last September through this July, the undercover agent purchased 116 guns from Walker, most of which came fullu loaded, according to authorities. Through those interactions, the undercover officer also befriended 23-year-old Earl Campbell of Rock Hill, South Carolina, who before long began bringing firearms up to New York via the so-called “Chinatown bus” service.

Police say they relied on court-authorized wiretaps to monitor their suspects, and in one conversation learned that Campbell was concerned that the “stop and frisk” tactics used by the NYPD posed a large risk of being apprehended with contraband. New York officials are currently appealing a federal ruling that last week mandated the NYPD the reform its policies.

“I think generally it’s believed by law enforcement people that without this tactic, the bad guys would feel a lot more comfortable in carrying guns,” Mayor Bloomberg said early Monday. “They carried guns before. They aren’t carrying guns now,” he added, “Common sense says that if you run a risk of getting stopped, you’re going to pay more attention to what’s in your pocket.”

In all, police were able to indict 19 individuals linked to either Walker or Campbell for their alleged involvement in gun trafficking. Walker was charged with conspiracy along with six others, and faces more than 250 counts, including three counts of a criminal sale of a firearm in the first degree. Campbell has been indicted on more than 200 counts as well.

Bloomberg, whose third and final term as New York mayor will expire early next year, has long advocated for gun control. In 2006 he co-founded the Mayors Against Illegal Guns national, bipartisan coalition, which today boasts more than 1,000 representatives from 46 states. Mayor Bloomberg personally invested $3 million into the campaign, which he says brings those city leaders together to fight crime with “a belief that we can do more to stop criminals from getting guns while also protecting the rights of citizens to freely own them.”