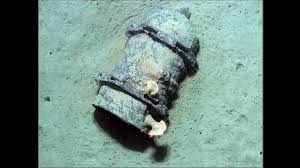 Millions of pounds of unexploded bombs and other military ordnance that were dumped decades ago in the Gulf of Mexico, as well as off the coasts of both the Atlantic and Pacific oceans, could now pose serious threats to shipping lanes and the 4,000 oil and gas rigs in the Gulf, warns two Texas A&M University oceanographers.

William Bryant and Neil Slowey, professors of oceanography who have more than 90 years of combined research experience in all of the Earth’s oceans, along with fellow researcher Mike Kemp of Washington, D.C., say millions of pounds of bombs are scattered over the Gulf of Mexico and also off the coasts of at least 16 states, from New Jersey to Hawaii. Bryant says the discarded bombs are hardly a secret. “This has been well known for decades by many people in marine science and oceanography,” he explains. He will give a presentation in San Juan, Puerto Rico Monday (Oct. 1) about the bombs to a group of oceanographers and marine scientists in a conference titled “International Dialogue on Underwater Munitions.”

“This subject has been very well documented through the years,” Bryant explains. “My first thought when I saw the news reports of the Deepwater Horizon explosion in the Gulf two years ago were, ‘Oh my gosh, I wonder if some of the bombs down there are to blame.’”

Military dumping of unused bombs into the Gulf and other sites started in 1946 and continued until 1970, when it was finally banned.

Millions of pounds – no one, including the military, knows how many – were sent to the ocean floor as numerous bases tried to lessen the amount of ordnance at their respective locations.

“The best guess is that at least 31 million pounds of bombs were dumped, but that could be a very conservative estimate,” Bryant notes.

“And these were all kinds of bombs, from land mines to the standard military bombs, also several types of chemical weapons. Our military also dumped bombs offshore that they got from Nazi Germany right after World War II. No one seems to know where all of them are and what condition they are in today.”

Photos show that some of the chemical weapons canisters, such as those that carried mustard gas, appear to be leaking materials and are damaged.

“Is there an environmental risk? We don’t know, and that in itself is reason to worry,” explains Bryant. “We just don’t know much at all about these bombs, and it’s been 40 to 60 years that they’ve been down there.”

With the ship traffic needed to support the 4,000 energy rigs, not to mention commercial fishing, cruise lines and other activities, the Gulf can be a sort of marine interstate highway system of its own. There are an estimated 30,000 workers on the oil and gas rigs at any given moment. 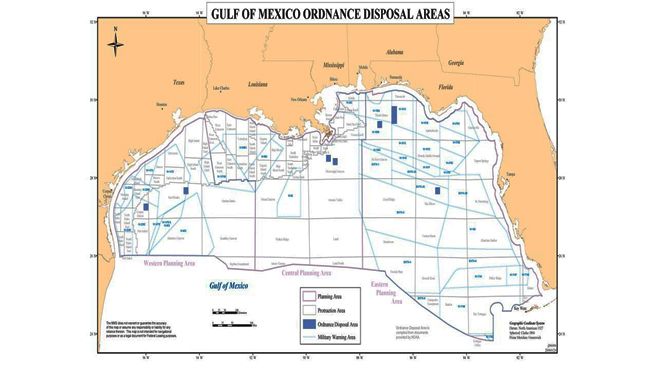 The bombs are no stranger to Bryant and Slowey, who have come across them numerous times while conducting various research projects in the Gulf, and they have photographed many of them sitting on the Gulf floor like so many bowling pins, some in areas cleared for oil and gas platform installation.

“We surveyed some of them on trips to the Gulf within the past few years,” he notes. “Ten are about 60 miles out and others are about 100 miles out. The next closest dump site to Texas is in Louisiana, not far from where the Mississippi River delta area is in the Gulf. Some shrimpers have recovered bombs and drums of mustard gas in their fishing nets.”

Bombs used in the military in the 1940s through the 1970s ranged from 250- to 500- and even 1,000-pound explosives, some of them the size of file cabinets. The military has a term for such unused bombs: UXO, or unexploded ordnance.

“Record keeping of these dump sites seems to be sketchy and incomplete at best. Even the military people don’t know where all of them are, and if they don’t know, that means no one really knows,” Bryant adds. He believes that some munitions were “short dumped,” meaning they were discarded outside designated dumping areas.

The subject of the disposal of munitions at sea has been discussed at several offshore technology conferences in recent years, and it was a topic at an international conference several years ago in Poland, Bryant says.

“The bottom line is that these bombs are a threat today and no one knows how to deal with the situation,” Bryant says. “If chemical agents are leaking from some of them, that’s a real problem. If many of them are still capable of exploding, that’s another big problem.

“There is a real need to research the locations of these bombs and to determine if any are leaking materials that could be harmful to marine life and humans,” Bryant says.

Pursuant to Title 17 U.S.C. 107, other copyrighted work is provided for educational purposes, research, critical comment, or debate without profit or payment. If you wish to use copyrighted material from this site for your own purposes beyond the 'fair use' exception, you must obtain permission from the copyright owner.  Views are those of authors and not necessarily those of United Truth Seekers.com. Content is Copyright 2012 the individual authors.