Bradley Manning lynched by the US government 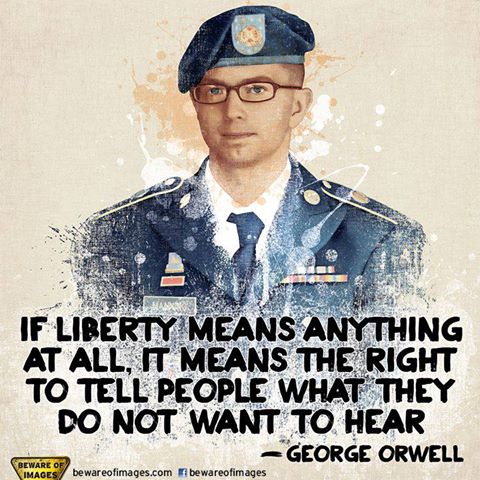 The verdict for Manning was predetermined, and the show trial in a kangaroo court – a post-modern American remix of China in the 1960s during the Cultural Revolution – just signed, sealed and delivered it.

The President of the United States (POTUS) had already said he was guilty. US corporate media had been screaming for three years he was guilty. Now the US government – who criminalized Manning with “evil intent” - has shown there will be hell to pay for anyone who dares to reveal American war crimes, which are, by definition, unpunishable.

As if there was a need of additional evidence of the “bright” future awaiting Edward Snowden – right on top of US Attorney General Eric Holder’s pathetic letter promising Snowden would not be tortured if extradited to the US.

All this as the Angel of History once more threw a bolt of lightning irony; Bradley Manning was pronounced guilty on no less than 19 counts by a Pentagon judge just next door to Spy Central, the NSA headquarters in Fort Meade, Maryland.

You’re in bed with al-Qaeda

Manning is an Oklahoman – just like music legend J.J. Cale, who died a few days ago. It was his decision to have his case heard not by a panel of military jurors – a close match to the Spanish Inquisition – but by a sole presiding military judge, Col. Denise Lind.

This was not exactly a sound move – as Lind was duly offered a carrot to go with the stick, in the form of a promotion to the US Army Court of Appeals after the show trial.

Unsurprisingly, Pentagon prosecutors defined Manning as a “traitor”, a hacker and an anarchist (yes, hackers and anarchists are worse criminals than al-Qaeda jihadists; after all, they are “our” allies in Syria).

The show trial had a Kafkaesque imprint all the way through. The Pentagon hacks at first refused to release court documents. Lind perfected a torture practice of reading for hours from abstruse rulings. Only under threat of a lawsuit from the media in a civilian court, the Pentagon reluctantly started releasing the odd document – obviously redacted to oblivion.

The only accusation that would apply to Manning is unauthorized disclosure of classified material. Everything else is a farce. 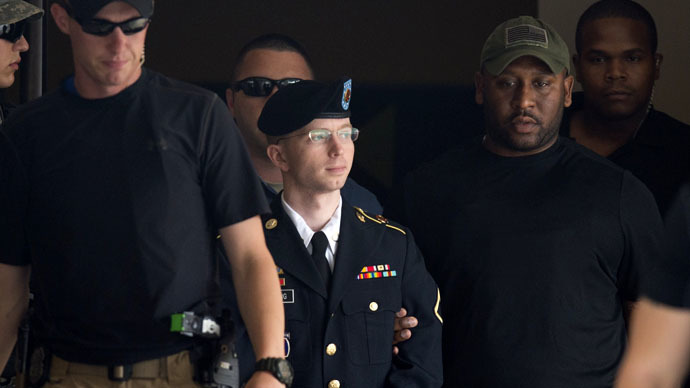 Manning’s defense argued he was a legitimate whistleblower; he never expected the leaked information to aid the enemy. Yet Lind denied a request by Manning’s attorneys to throw out the charge. She said he learned as a low-level intelligence analyst that the public release of secret information would risk US national security. The US government was adamant that Manning knew he was helping al-Qaeda when he released more than 700,000 documents to WikiLeaks.

Lind even altered the charges when the trial was over to suit the US government. US corporate media was too busy to notice it, revelling in the New York mayoral race scandal.

The fact that Manning was found not guilty of aiding the enemy still leaves him guilty on no less than 19 counts, including “wantonly cause to be published on the internet intelligence belonging to the US government” - enough to possibly guarantee him decades of (military) jail time well into the 22nd century.

After sentencing, it will be up to Maj. Gen. Jeffrey Buchanan - the new commander for the Military District of Washington. He will review the case - and in theory has the power to reduce Manning’s overall sentence. Holding one’s breath is not recommended.

The enemy is you

WikiLeaks founder Julian Assange, correctly, said on Friday that if Manning was convicted of aiding the enemy that would be “the end of national security journalism in the United States.”
Still, the US government and the Pentagon will keep taking no prisoners in their campaign to criminalize investigative journalism from the inside (that’s what Manning and Snowden did) and on the outside (as in WikiLeaks and the work of Glenn Greenwald).

The hellish circular logic of the US government rules that to publish information on the internet means spying. So if the enemy goes on the internet, you are enabling the enemy. Manning being found not guilty of aiding the enemy but mostly guilty of everything else still delivers the message – translated in decades in a military prison.

The verdict also does not change the fact that anything is a “deep” military or national security “secret” if the industrial-military-surveillance complex says so. It totally fits the logic of the Pentagon’s endless war – which in fact is the same ol’ Global War on Terror (GWOT) of 2001-2002, codified in the Pentagon’s 2002 Full Spectrum Dominance doctrine (of which the NSA especially covers the cyberspace sphere), all brilliantly renamed by Tom Engelhardt as the Global War on You (GWOY).

Meanwhile, even Arctic polar bears know Donald Rumsfeld institutionalized torture in Iraq; the Pentagon killed an untold number of civilians in its self-defined “arc of instability”; the Pentagon never admits collateral damage (not to mention collateral murder); and the absolute majority of the Guantanamo prisoners are absolutely innocent.

Even if the US government and the Pentagon threw Manning into a variant of Edgar Allan Poe’s Pit and the Pendulum, they would never be able to hide their wasteland of war crimes. Assange is confined to an embassy, Snowden to an airport and Manning to a jail cell. But make no mistake; it’s the Masters of the Universe who are afraid, very much afraid. Afraid of anyone with a conscience; afraid of you; afraid of the whole wide world.

The statements, views and opinions expressed in this column are solely those of the author and do not necessarily represent those of RT.

Pepe Escobar is the roving correspondent for Asia Times/Hong Kong, an analyst for RT and TomDispatch, and a frequent contributor to websites and radio shows ranging from the US to East Asia.

Jul 30, 2013
Since the beginning of Bradley Manning's trial, we have given you the latest on the Private first class turned whistleblower and now the soldier could face up to 136 years behind bars after the Army judge found Manning guilty of espionage and other charges on Tuesday. RT's Liz Wahl takes a look back on Manning's involvement with the anti-secrecy website WikiLeaks and the journey to his verdict.

There could be an orthodox way for Assange, Manning and Snowden's dilemma? First they could declare themselves President by murdering innocent people in other lands, but they would have to promote their ego by pining war medals upon their person, only then would they escape justice without the death penalty been imposed upon them?