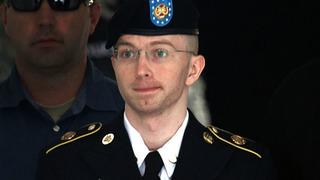 The Nobel Prize committee has received a petition that endorses awarding the peace prize to US Army Private Bradley Manning, who is convicted of espionage and facing up to 90 years behind bars for leaking classified information to WikiLeaks.

US anti-war activist Normon Soloman, one of the organizers of the petition, gave the 5,000-page document to Nobel committee member Asle Toje on Monday.

However, Toje said the annually awarded US$1 million prize is "not a popularity contest," adding that such campaigns do not influence the Nobel Committee in its choice.

“Remaining in prison and facing relentless prosecution by the US government, no one is more in need of the Nobel Peace Prize,” states the petition, which garnered more than 100,000 signatures.

"No individual has done more to push back against what Martin Luther King Jr. called 'the madness of militarism' than Bradley Manning," the petition reads. 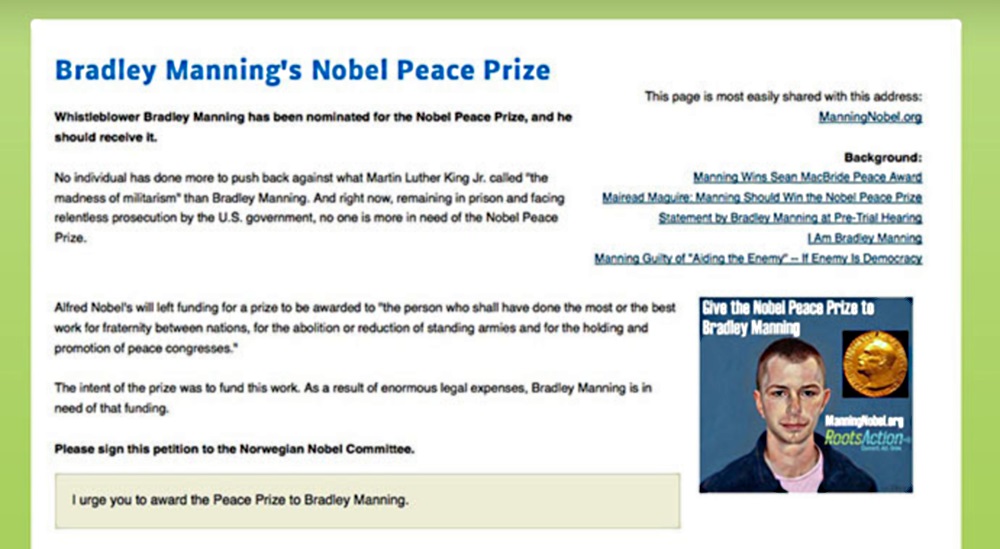 US Army whistleblower Bradley Manning, 25, was found guilty on 20 of his 22 charges for sharing thousands of classified US documents with the anti-secrecy website WikiLeaks in late 2009 and early 2010. Among other charges, he was found guilty of espionage, theft, and embezzlement of government property.

According to Solomon, awarding the soldier the Nobel Prize would underline the important role of whistleblowers in promoting peace and democracy.

"Unless we can speak the truth, then peace-making becomes a hollow exercise of rhetoric rather than reality," Solomon told reporters before submitting the petition.

Solomon has also stated that Manning’s revelations on America’s views of the Iraq War “stiffened the resolve of Iraq's government to seek jurisdiction over American troops for criminal actions.”

In his article published by USA Today on July 30, Solomon wrote that “It's easy to insist that Bradley Manning must face the consequences of his actions. But we badly need whistleblowers like Manning because US government leaders do not face the consequences of their actions, including perpetual warfare abroad and assaults on civil liberties at home. No government should have the power to keep waging war while using secrecy to cloak policies that cannot stand the light of day.”

The Nobel Peace Prize winner will be announced on October 11, 2013 in Oslo.