CHURCHILL, Man. – The country’s most elite and secretive fighters dropped down from a helicopter and into the public spotlight Friday for the first time in the history of Canada’s special forces.

About 30 Joint Task Force 2 operators were the key actors in what was billed as the most complex scenario ever run by the military during the annual summer exercises.

It marked a coming-out-party of sorts for JTF-2, which is rarely talked about in public and even more infrequently witnessed plying its trade. Its work on counter-terrorism operations at home and in places like Afghanistan is often praised but never publicly acknowledged.

“They’re not in the public eye . . . and they will probably never will be for a number of operational security reasons,” said Brig-Gen. Denis Thompson, commander of Canadian Special Operations Forces.

“But it’s important for them to be seen to be contributing to Canada’s overall defence because a lot of what we do is in the shadows.”

The operation began under cloudy skies in Hudson Bay, as a so-called “vessel of interest” — in reality, an oil-and-gas exploration ship from Cape Breton — steamed towards Churchill.

On one side, the hulking HMCS St. John’s stood guard, while on the other lurked the Coast Guard Ship Pierre Radisson. Prime Minister Stephen Harper and Defence Minister Peter MacKay stood on the vessel’s deck, looking out over the horizon.

From around the Coast Guard ship roared three inflatable boats, each packed with rifle-toting soldiers all clad in black.

As they clambered on board the ship, Griffon helicopters suddenly appeared overhead, disgorging about a dozen additional soldiers — some of whom struggled briefly to gain their footing on the ship’s slick deck.

The soldiers moved decisively and silently to secure the ship before one strolled over to Harper to inform him the initial task was complete. 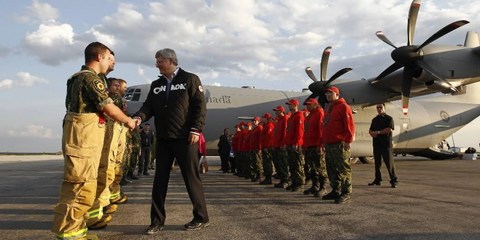 Op Nanook is conducting two separate operations at the same time this year — one involving a boat collision in the Western Arctic and the one Harper observed near Churchill, Man. — involving some 1,250 people from the military as well as other public security agencies.

Harper watches some of the operation every year and decided to witness the one near Churchill, for which JTF-2 was already scheduled. Since he travels with a full media contingent, an opportunity for the force’s first-ever official close-up was born.

“At the end of the day, all of National Defence is about deterrence and reassurance, and so we took this opportunity to use Operation Nanook to demonstrate CANSOF capability as a deterrent and reassurance piece,” Thompson said.

“Deterring those who would do harm to us and reassuring the Canadian public.”

The scenario in which the unit operated Friday could have been ripped from the pages of a political playbook.

The maritime counter-terrorism unit was given intelligence that a potential illegal immigrant who posed a danger to national security was on board an otherwise innocuous eco-tourism boat.

They were tasked with apprehending the man and securing the ship.

The Conservative government has suggested that people seeking illegal entry into Canada on board ships, usually in mass human smuggling operations, pose a security risk.

“From my point of view, this is a perfect opportunity to harness a scenario that is quite realistic and to get the training done at the same time,” said Thompson.

“For me, this was a win-win situation.”

The Conservatives recently passed legislation that imposes stiffer penalties on human smugglers which also allows for those who’ve been smuggled to be detained.

The illegal individual aboard the ship in Friday’s scenario found himself set upon by a contingent of heavily armed, balaclava-clad fighters who wrestled him to the ground.

The cost of the exercise, as well as one being carried out simultaneously in the Western Arctic, is estimated to be $16.5 million.

In a speech later to dignitaries and soldiers assembled on the deck of the HMCS St. John’s, Harper said he was impressed by the display of skill and precision.

He noted the importance for the troops of practising real-life scenarios.

“Sadly, possible scenarios sometimes become tragic realities as we saw last year in Resolute Bay with the crash of a First Air jet,” Harper said. “It was a sad reminder that, in an uncertain world, constant preparedness is a soldier’s occupation.”

Keep a eye on Regina, Canada - Russian Troop are there now!