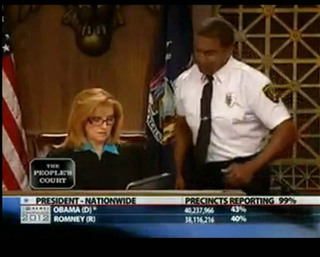 The 2012 presidential election is still more than two weeks away, but on Friday a CBS News affiliate in Arizona called the race for President Barack Obama.

For 17 seconds, Phoenix, Arizona CBS News affiliate KPHO ran a lower third graphic that showed that Obama had won the Nov. 6 election over Gov. Mitt Romney with 99% of the precincts reporting. The lower third graphic appeared around 3:30 p.m. on Oct. 19, during an episode of “The People’s Court.”

The CBS News graphic showed Obama winning the election with 43 percent of the vote nationwide to Romney’s 40 percent -– or 40,237,966 votes to 38,116,216. It is unclear who garnered the other 17 percent in the fictional election results.

KPHO’s general manager did not return The Daily Caller’s request for comment by time of publication.

Michele Wallace of KPHO told The DC that this was the result of a mistake made with a test graphic:

“On Friday October 19th during a test of KPHO- CBS 5’s election returns software we inadvertently aired a test graphic for about 15 seconds in an episode of Peoples Court,” Wallace said. “The mistake was caught quickly and taken off the screen. With the election about 2 weeks away, the TV station routinely tests its equipment to ensure our viewers have the very latest’s results on election night.  We regret the error and apologize to any viewer who was confused by the mistake.”