Chip-enabled National ID Card To Start May 2011 Someone said to me one time, “oh you conspiracy people, you just like stirring people up.” Well, I must admit, I do enjoy “stirring people up” if it’s a means of motivating someone to wake up and see the walls closing in around them so they have a chance to do something about it before it’s too late. For years now, rumors of the National ID Card, known as the REAL ID ACT, have been building and building, and I am here to tell you folks that it’s not a rumor, it’s a fact. And that fact becomes reality in May of 2011. So buckle up and pay attention to what I am about to show you.

What the government actually mandates Let’s jump right in with what the US government actually says the the new card will have, truth is usually stranger than fiction anyway. This is from the official government website, www.gpo.gov, and it’s quite revealing. First off, the Department of Homeland Security (DHS) has mandated that the new cards be WHTI Compliant, so here is a definition of what that is:
“WHTI is the acronym for Western Hemisphere Travel Initiative, the federal plan to implement the 9/11 Commission recommendation and Congressional mandate that requires all travelers, U.S. citizens and foreign nationals alike, to present a passport or other approved document that establishes the bearer’s identity and nationality to enter or re-enter the United States. (1) The U.S. Departments of Homeland Security and State have implemented the WHTI in phases, beginning with air travel, as of January 23, 2007, and land and sea travel, as of June 1, 2009. Areas that fall under the WHTI (from the perspective of the United States) are Canada, Mexico, Bermuda, and 17 Caribbean nations (Anguilla, Antigua and Barbuda, Aruba, Bahamas, Bermuda, British Virgin Islands, Cayman Islands, Dominica, Dominican Republic, Grenada, Jamaica (except for business travel), Montserrat, Netherlands Antilles, St. Kitts and Nevis, St. Lucia, St. Vincent and the Grenadines, and Turks and Caicos). 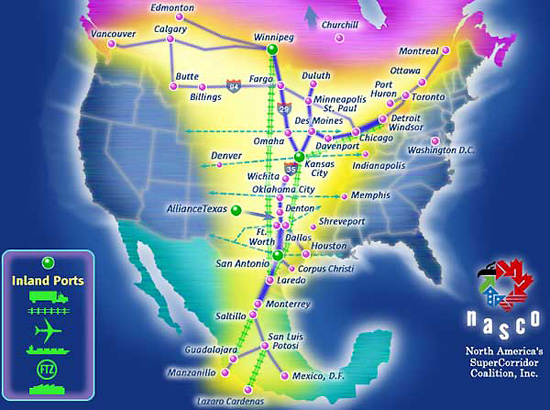 The Western Hemisphere Travel Initiative and the North American Union  Above

Wow, that’s quite an area to cover, but there is one thing you need to pay close attention to. The three main areas that they seem concerned about are the US, Canada and Mexico – otherwise known as the North American Union. Hmmmm….moving on.

Now, there is no debate as to whether or not the card will contain a chip that is capable of tracking people, the only debate has been around which tracking technology better suits their needs. Here are a few quotes again from the official government document:
“ DHS also invites comments on how States would or could incorporate a separate WHTI- compliant technology, such as an RFID-enabled vicinity chip technology, in addition to the REAL ID PDF417 barcode requirement.”

“States can leverage the same infrastructure that they will need to purchase for REAL ID to incorporate MRZ, proximity chips, and vicinity chip technology onto a driver’s license.”

“The use of RFID is essential to the WHTI program in order to ensure facilitation at crowded U.S. land and sea crossing points. Similar concerns are not implicated by REAL ID, which is one of the factors that led DHS to select the 2D bar code as the common machine readable technology on driver’s licenses and identification cards. DHS encourages States to explore alternative technologies on their driver’s licenses and identification cards in order to promote security and technology advances as well as e-government initiatives a State may wish to explore.”

“DHS does not believe that non-compliant driver’s licenses or credit cards are acceptable documents to establish identity.” Meaning – no chip, no ID. Doesn’t this remind you of something else?

The deadline is set, and it’s now

According to the official website for the Department of Homeland Security, the deadline for all this to be in place is May 11, 2011. The trackable, chip-enabled National ID Card we have long feared is now upon us. Of course, any sensible person will soon realize that these cards can certainly be stolen, and we can’t have that now, can we? Then any sensible person soon comes to the conclusion that the part of the card that makes it work is the chip, sooooooooo…..why not…and I’m just spit-balling here…why not IMPLANT the chip into the person? My, my, what a perfect solution.

My Comment, Pam, is they are not IMPLANTING a thing into me!~

Comment by jacqueline G McMillen on May 8, 2011 at 12:01pm
r there any organized resistance groups to possibly initiate a revolution to take the republic back out of the hands of these socialist scum that have destroyed our liberty?