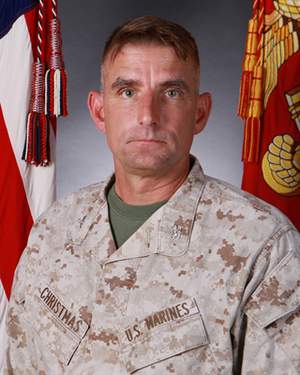 The commander of the 22nd Marine Expeditionary Unit was removed from his position on Wednesday, less than a week after the force’s subordinate units were first brought together to deploy in 2014, Marine officials said.

Col. James Christmas was relieved of command by Maj. Gen. Raymond Fox, the commander of II Marine Expeditionary Force, out of Camp Lejeune, N.C., after the general lost confidence in Christmas’ ability to continue commanding the Marines and sailors of the 22nd MEU,” said Capt. Binford Strickland, a Marine spokesman. No additional explanation was given for the decision.

“The II Marine Expeditionary Force is not a zero-defect organization, and the relief of a commander is never an easy decision,” Strickland said. “However, the commanding general decided this action was in the best interest of the Marines and sailors of the 22nd MEU and the Marine Corps.”

Christmas served this spring as both the commander of the Marine Corps’ new crisis-response unit, Special-Purpose Marine Air-Ground Task Force Crisis Response, and as the 22nd MEU commander, according to a previous Marine news release. The 550-Marine unit deployed for the first time in April to Morón Air Base in Spain, providing the U.S. with a new option to respond to emergencies in northern Africa. Christmas became the commander of the 22nd MEU on June 28, 2012, replacing Col. Eric Steidl.

Col. William Dunn will now take over the 22nd MEU, Marine officials said. He was selected last summer by Commandant Gen. Jim Amos to be the next commander of the 26th MEU, also out of Camp Lejeune, but will instead take this assignment.

At least six other Marine officers have been removed from command since mid-March. In each case, Marine officials have provided little explanation for why the decisions were made, saying a general officer had lost confidence in that commander’s ability to lead his personnel.

The decision to relieve Christmas abruptly ends his time with the unit. He was selected for the post last June, and took command after finishing a tour as the deliberate plans branch chief with U.S. Special Operations Command, according to his official biography. While there, he was the lead writer of the Defense Department’s Global Campaign Plan for Countering Terrorism. He could not immediately be reached for comment.

Previously, Christmas commanded Lejeune’s 1st Battalion, 2nd Marines, as it deployed to Iraq in 2007. He then became the operations officer for 2nd Marine Division until he was selected for a prestigious top-level school assignment. He is the recipient of the Bronze Star with combat distinguishing device and gold star, in lieu of a second award.

Christmas also is part of a family with a rich Marine tradition. His father, retired Lt. Gen. Ron Christmas, is a Navy Cross recipientwho served as the president and CEO of the Marine Corps Heritage Foundation from 1996 to 2011. His brother is Col. Brian Christmas, who as a lieutenant colonel led Lejeune’s 3rd Battalion, 6th Marines, during the assault on the Taliban stronghold of Marjah, Afghanistan.

The 22nd MEU is expected to deploy early next year with the Bataan Amphibious Ready Group and conduct operations in the Middle East, Africa and Europe, Marine officials said. Its major elements include Battalion Landing Team 1st Battalion, 6th Marines; Marine Medium Tiltrotor Squadron 263 (reinforced); and Combat Logistics Battalion 22. They were about to embark on a rigorous six-month training cycle ahead of deploying.

Yes Kerry I am with you on this, something is going on but we will not know what untill it does happen. Sad to say but we will loose lives & could be our own the way things are going!

Teresa Norman, there must be something big going down on Capital Hill, because they only replace leaders who are not part of the elite guard or insiders. Like the Yids say, when in battle, be last so we the Jews will be first e.g., all the good soldiers fighting on the front-line will be killed and replaced by Jews at the rear. Jews win, goyim lose!!!

I can guess why but I can not prove it... We are Awake

"As least six other Marine officers have been removed from command since mid-March. In each case, Marine officials have provided little explanation for why the decisions were made, saying a general officer had lost confidence in that commander’s ability to lead his personnel."

Anyone want to take a guess as to why these men were kicked to the curb?? We Americans, the ones that are awake...the ones that can see through this present Administration know why, and it looks like these fine men were not willing now or ever to put their jack boots on the Americans necks! SO THIS IS THE KEY: 'General officers had lost confidence in their abilities.' A cop out!!

In other words, since you don't want to play ball, well get men that will!!!

I chose not to read the previous posts, so as not to be swayed one way or another. I just read the one under this...and it appears great mind think alike!!!

There will be loss on both sides, I do not see our Patriots laying down and allowing military and or police to put them in a FEMA camp, Or to re-locate them anywhere. I have taken an oath, I shall adhere to it. My first and foremost priority is God and His instructions for us...then my country. I, for one, will not go quietly!!

It sounds like the British are back "YES MINISTER" YES SIR, can do Sir. Another YES-man.

GOVT CONTINUES TO PREPARE PRESENT GOVT POSITIONS FOR LOYALTY TO THE ADMINISTRATION RATHER THAN THE CONSTITUTION. THIS TACTICAL COMMAND POSITION IS CRUCIAL TO BATTLEFIELD OPERATIONS AND THEY JUST MADE SURE THEY DID NOT HAVE A PATRIOT IN PLACE...