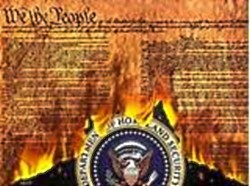 The Department of Homeland Security’s civil rights watchdog has concluded that travelers along the nation’s borders may have their electronics seized and the contents of those devices examined for any reason whatsoever — all in the name of national security.

The DHS, which secures the nation’s border, in 2009 announced that it would conduct a “Civil Liberties Impact Assessment” of its suspicion-less search-and-seizure policy pertaining to electronic devices “within 120 days.” More than three years later, the DHS office of Civil Rights and Civil Liberties published a two-page executive summary of its findings.

“We also conclude that imposing a requirement that officers have reasonable suspicion in order to conduct a border search of an electronic device would be operationally harmful without concomitant civil rights/civil liberties benefits,” the executive summary said.

The memo highlights the friction between today’s reality that electronic devices have become virtual extensions of ourselves housing everything from e-mail to instant-message chats to photos and our papers and effects — juxtaposed against the government’s stated quest for national security.

The President George W. Bush administration first announced the suspicion-less, electronics search rules in 2008. The President Barack Obama administration followed up with virtually the same rules a year later. Between 2008 and 2010, 6,500 persons had their electronic devices searched along the U.S. border, according to DHS data.

According to legal precedent, the Fourth Amendment — the right to be free from unreasonable searches and seizures — does not apply along the border. By the way, the government contends the Fourth-Amendment-Free Zone stretches 100 miles inland from the nation’s actual border.

Civil rights groups like the American Civil Liberties Union suggest that “reasonable suspicion” should be the rule, at a minimum, despite that being a lower standard than required by the Fourth Amendment.

“There should be a reasonable, articulate reason why the search of our electronic devices could lead to evidence of a crime,” Catherine Crump, an ACLU staff attorney, said in a telephone interview. “That’s a low threshold.”

The DHS watchdog’s conclusion isn’t surprising, as the DHS is taking that position in litigation in which the ACLU is challenging the suspicion-less, electronic-device searches and seizures along the nation’s borders. But that conclusion nevertheless is alarming considering it came from the DHS civil rights watchdog, which maintains its mission is “promoting respect for civil rights and civil liberties.”

“This is a civil liberties watchdog office. If it is doing its job property, it is supposed to objectively evaluate. It has the power to recommend safeguards to safeguard Americans’ rights,” Crump said. “The office has not done that and the public has the right to know why.”

Toward that goal, the ACLU on Friday filed a Freedom of Information Act request demanding to see the full report that the executive summary discusses.

Meantime, a lawsuit the ACLU brought on the issue concerns a New York man whose laptop was seized along the Canadian border in 2010 and returned 11 days later after his attorney complained.

At an Amtrak inspection point, Pascal Abidor showed his U.S. passport to a federal agent. He was ordered to move to the cafe car, where they removed his laptop from his luggage and “ordered Mr. Abidor to enter his password,” according to the lawsuit.

Agents asked him about pictures they found on his laptop, which included Hamas and Hezbollah rallies. He explained that he was earning a doctoral degree at a Canadian university on the topic of the modern history of Shiites in Lebanon.

He was handcuffed and then jailed for three hours while the authorities looked through his computer while numerous agents questioned him, according to the suit, which is pending in New York federal court.