Fear and panic spreads as Ebola doctor's week-long itinerary reveals he rode three subway lines, ate out, went bowling and took an Uber taxi before testing positive for deadly virus. Ebola panic is swarming New York City tonight as it emerged infected doctor Craig Spencer rode the subway, visited a crowded bowling hot spot and took an Uber cab just one day before he was rushed to the hospital with a 103F fever.

Tonight, the Doctors Without Borders physician tested positive for the deadly virus six days after returning from Guinea where he was treating patients.

But it has emerged that instead of steering clear of crowds, the 33-year-old last night took the subway from Harlem to Williamsburg, where he visited The Gutter, before taking an Uber cab home.

Earlier that day, he went on a three-mile jog and took the subway to the High Line garden - a popular tourist destination - before eating out at a restaurant. Brooklyn panic: Ebola patient Dr Craig Spencer took the subway to The Gutter (pictured), a trendy Brooklyn bowling alley, then got an Uber cab home one day before he was rushed to the hospital with a 103F fever Ebola in NYC: Dr Spencer flew to Guinea on September 18 to treat patients with Doctors Without Borders

The terrifying details mean that residents in at least two dense New York City neighborhoods could have been exposed: Williamsburg and Harlem, where Spencer lives.

New Yorkers have flooded Twitter in panic revealing their fears after visiting the bowling alley and taking the subway at the same time.

One exclaimed: 'He took the subway from Harlem to Brooklyn?!?! YOU LITERALLY HAVE TO GO THROUGH THE ENTIRE CITY SUBWAY SYSTEM TO DO THAT'

Another said: 'Now that Ebola is here, I ain't takin the subway no more...'

And one wrote: 'Son Ebola found it's way to NY? I'm sick'

Health officials confirmed he visited The Gutter, which has tonight cancelled its scheduled gigs and closed its doors.

A panel briefing reporters on the diagnosis added that Dr Spencer last night rode the subway from north west Manhattan to Brooklyn.

He took the A train from 147th Street between Broadway and Amsterdam Avenue down the west side of Manhattan.

He then switched to the L train, which travels in a straight horizontal line across the island and under the East River into Brooklyn. Major route: He took the A train to 14th St-8th Ave, Manhattan, then took the L train to Bedford Avenue, Brooklyn Gutter shuttered: The Gutter did not open on Thursday night and a band showcase was canceled This is the route Dr Spencer took last night. During the day he also took the 1 train to the High Line and ate out.

Alighting at Bedford Avenue station, he then walked to The Gutter bowling alley.

Earlier in the day he also went on a three-mile run, rode the 1 train, went to the High Line, and dined out.

His fiancee and two friends are now under observation but health officials will continue to interview Dr Spencer to determine if anyone else requires monitoring.

Although police taped off his apartment block on 147th St in Harlem, and barred anybody from going inside, officials insist residents are not at risk of contracting the disease.

Dr Thomas Frieden, president of the CDC, told the panel: 'Our concern now is with healthcare workers who are caring for him.

'By coincidence, we already have a team on the ground at Bellevue that has been reviewing the preparations and observing the hospital working.

'We have another team on the way now.

'I also wish to reiterate the case of Mr Duncan in Dallas. Even his household contacts who were with him for several days after he got sick did not get the disease. It is a scary disease but it does not spread easily.'

Owners of the outlet will now be working to determine what Dr Spencer did at the bowling alley - whether he rented shoes, for instance, or shared a drink.

Ebola can be contracted from contact with the bodily fluids including sweat of an infected person only when victims are symptomatic, with the infectiousness increasing as the victim's condition worsens.

The Gutter did not open its doors on Thursday and canceled a scheduled band showcase but staff made no mention of Ebola. 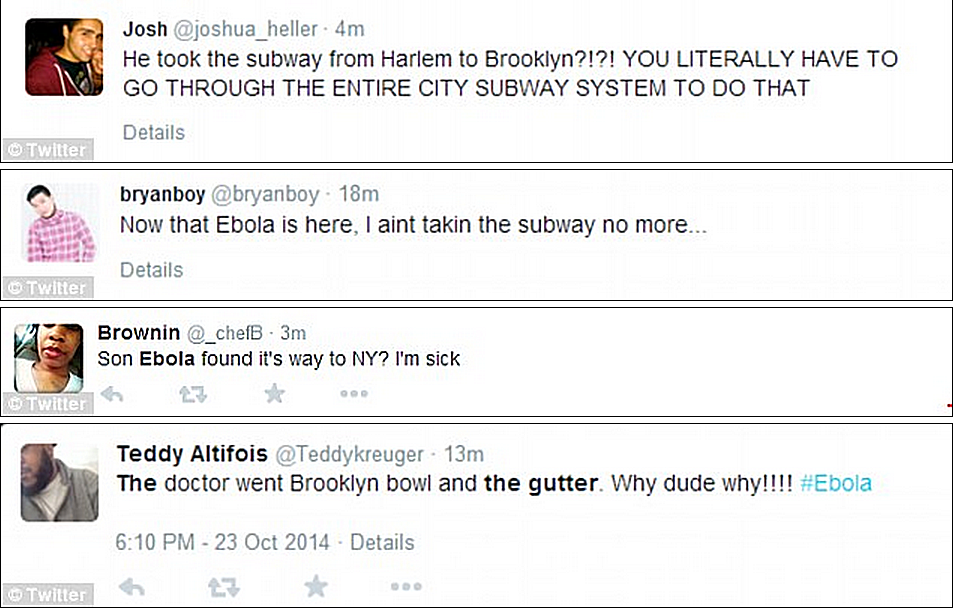 Taking it down: Two police officers in face masks were seen removing tape from Dr Spencer's block of flats Casual: The Do Not Cross signs were then casually tipped into a Harlem bin as officers say the building is safe.

The closure was blamed on 'unforeseen circumstances' as reporters began to flock to the establishment into Thursday night.

Reporters had flocked to the shuttered doors of The Gutter by Thursday evening, but no one in hazmats suits had yet to appear.

Dr Spencer flew to Africa on September 18 to treat patients in Guinea with non-profit organization Doctors Without Borders.

Flying out, Dr Spencer tweeted a picture of himself wearing a full yellow hazmat suit and face mask with the message: 'Off to Guinea with Doctors Without Borders (MSF).

'Please support organizations that are sending support or personnel to West Africa, and help combat one of the worst public health and humanitarian disasters in recent history.'

On October 16, he checked in at a hotel in Brussels, Belgium, on his return journey from Guinea to the U.S.

He arrived at JFK on October 17 where he was screened for the disease.

Health officials tonight insisted Dr Spencer felt no symptoms - aside from fatigue - until he awoke with a fever at around 10am on Thursday.

He then contacted the health department and was taken in to Bellevue for testing.

The NYC Department of Health and Mental Hygiene said on Thursday: 'EMS HAZ-TAC Units transported a patient to Bellevue Hospital who presented a fever and gastrointestinal symptoms.

'The patient is a health care worker who returned to the U.S. within the past 21 days from one of the three countries currently facing the outbreak of this virus.'

The mayor said that being near someone in places like a subway car does not put someone at risk because 'Ebola is an extremely difficult disease to get.' Conference: The city's health commissioner Mary Bassett (left) and Mayor Bill de Blasio (right) addressed the concerns of the public at a conference tonight and insisted New Yorkers do not have to fear the disease

'Every hospital in the city is prepared in the event other patients come forward,' said de Blasio.

Governor Cuomo hit on many of the same points, but admitted this case did not come as a surprise.

[We were] hoping that it didn't happen but also realistic,' Cuomo said. 'We can't say this is unexpected.'

'We're already in contact with the four people,' the governor said.

People need more information on Ebola and people need to use Universal Precautions. Someone with Ebola does not be out on the F**KING Town in NYC! I have been told by someone in Army it is contact to contact spread. But he has a fever of 103F and that is not good for us, he does sweat did you think of bodily fluids that can infect someone. What about his dishes after eating? He went Bowling = Sweat So not cool of a doctor to do this! He knows better! Good Luck with this one NYC!