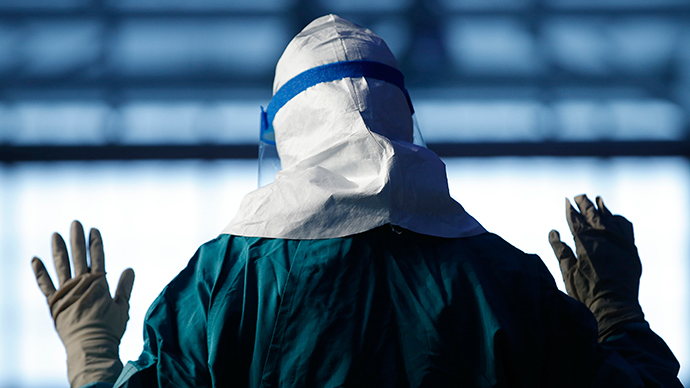 A healthcare worker who had recently returned from Ebola-stricken Guinea where he treated patients has been rushed to a New York City hospital with a fever and gastrointestinal symptoms. Preliminary results are expected within 12 hours.

The doctor suffering symptoms of the disease was rushed to hospital on Thursday with “all necessary precautions”, according to the New York City Department of Health. He was identified as Dr. Craig Spencer who works with Doctors Without Borders, according to CBS News.

New York City Councilor Mark Levine confirmed the patient being tested is Craig Spencer, adding that authorities were discussing possible evacuation of the Harlem apartment building where he lived.

Spencer was a medic working in Guinea but has been back in the United State for 10 days. He quarantined himself after developing a high fever, said the Daily News.

“Today, EMS HAZ TAC Units transferred to Bellevue Hospital a patient who presented a fever and gastrointestinal symptoms,” Bellevue Hospital administrators said in a statement. “The patient is a health care worker who returned to the US within the past 21 days from one of the three countries currently facing the outbreak of this virus.”

The statement went on to say the patient was transported in protective equipment, and the hospital along with the Center for Disease Control and Prevention, and the Department of Health and Mental Hygiene “has decided to conduct a test for the Ebola virus because of this patient’s recent travel history, pattern of symptoms, and past work.”

“We’re aware of the case and we’re working with the New York City health department,” a spokesman for the US Centers for Disease Control and Prevention said in a statement. “We’re consulting with them as they assess the case and any plan to test the patient will be announced by the New York authorities.”

READ MORE: US to monitor anyone coming from Ebola-stricken countries for 21 days

The patient is also being evaluated for other illnesses as well, as his symptoms can also be consistent with salmonella, malaria, or the stomach flu. Test results are expected in the next 12 hours. Bellevue Hospital said disease detectives are trying to trace all of the patient’s contacts to identify anyone who may be at potential risk. His apartment in Spanish Harlem is sealed-off.

Bellevue Hospital in Manhattan’s midtown has been designated for the identification and treatment of Ebola patients by the City and State.

Hospital administrators said that “the chances of the average New Yorker contacting Ebola are extremely slim. Ebola is spread by directly touching the bodily fluids of an infected person.”

New York’s John F. Kennedy airport was the first American airport to start conducting screenings of passengers coming from the three countries stricken by the Ebola virus – Guinea, Liberia and Sierra Leone. Passengers are asked questions about potential exposure to Ebola, and have their temperature taken.