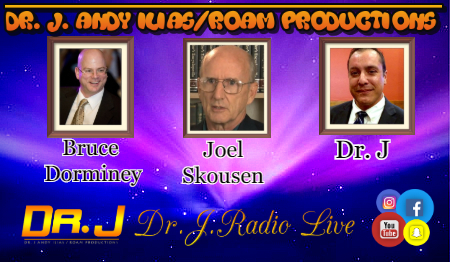 Join us on United Public Radio, Deprogrammed Radio in the UK, and on You Tube
https://www.youtube.com/channel/UCAzKzA_CL5QxGrijRowPDRA Listen at www.drjradiolive.com/listen or at http://www.uprntalkradio.com/ by clicking the UPRN link at the top of the page.
Bruce Dorminey is a science journalist and author of “Distant Wanderers: the Search for Planets Beyond the Solar System” who writes about over-the-horizon technology, primarily astronomy and space science. Dorminey is a former Hong Kong bureau chief for Aviation Week & Space Technology magazine and former Paris-based technology correspondent for the Financial Times newspaper who has reported from six continents. A 1998 winner in the Royal Aeronautical Society’s Aerospace Journalist of the Year Awards (AJOYA), he’s interviewed Nobel Prize winners and written about everything from potato blight to dark energy. Previously, Dorminey was a film and arts correspondent in New York and Europe, primarily for newspaper outlets like the International Herald Tribune, the Boston Globe and Canada’s Globe & Mail. Recently, he’s contributed to Scientific American.com, Nature News, Physics World, and Yale Environment 360.com. He’s also a current contributor to Astronomy and Sky & Telescope and a correspondent for Renewable Energy World.

Joel Skousen is a designer of high security residences and retreats and the publisher of the World Affairs Brief–a weekly internet news analysis service.
He is a political scientist, by training, specializing in foreign policy, as well as the philosophy of law, free market economics and US Constitutional theory. His main area of research focuses on helping his readers understand the hidden globalist agenda behind US foreign and domestic policy. He has developed a working theory to explain the Wests conflicting policies of both supporting and attacking, at different times and places, contradictory positions on terrorism, Communist-backed revolutions, drugs, money laundering, and organized crime.

Mr. Skousen possesses a broad background in various disciplines which allows him to analyze geopolitical issues from personal experience. He is a former Marine officer and fighter pilot and is intimately familiar with security and defense issues. During the 1980s he served as the Chairman of the Conservative National Committee in Washington DC, a coalition of conservative organizations opposed to political compromise that undermines US sovereignty and security. He knows how the political process works and the dangers it presents to the preservation of liberty. While in Washington he also served as the Executive Editor of Conservative Digest where he developed numerous sources around the world. Mr. Skousen travels widely and reads and speaks multiple foreign languages–enabling him to access a wide range of foreign reports.

Joel Skousen’ main career for the last 40 years has been to design high security residents and retreats across North America, including, safe rooms and alternative power systems. He is the author of four books, one on law and government, and three on his special design innovations in security architecture and Strategic Relocation:

1. Essential Principles for the Conservation of Liberty, 1984

2. The Secure Home–Architectural Design, Construction and Remodeling of Self-Sufficient Residences and Retreats (updated, 2018).