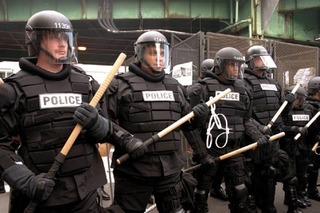 EAST ST. LOUIS, Ill. (KMOV.com) – East St. Louis Mayor Alvin Parks has enacted a tough curfew for  residents under the age of 18 after four people were killed and three others injured over a violent 36-hour span.

During a press conference on Wednesday, the mayor said anyone under 18 years old will be arrested between 8 a.m. and 3:30 p.m. f they are not in school. Teens 17 and under will also be taken into custody if they are caught wondering the streets after 10 p.m.

"When a 14 year old gets shot in broad daylight while cutting the grass that tells you that we have to do whatever is necessary," said Mayor Alvin Parks.

Police will also arrest those under 18 if they’re caught loitering. That’s a change from before when police were only allowed to give warnings.

In addition, police will be allowed to stop and search more vehicles for guns, weapons, drugs and open containers. They can also search pedestrians for alcohol, demand state IDs and arrest men or boys under 18 years old for wearing royal blue or bright-red clothing.

"We realize that some of the measures being expressed here are extreme," said Mayor Parks. "But one of the points we're at right now is extreme action- extreme violence."

The lockdown was prompted by a rash of violence that saw four people die and three others injured in separate attacks on Monday and Tuesday.

The latest victim of the violence was a 14-year-old a student at Yvetter Young Middle who was suspended Monday for scuffling at school last week.

Police said his mother sent him out to cut grass as a punishment. But his work was cut short when a man with an assault rifle shot him in the 1500 block of North 45th St. Police have two people in custody.  Detectives think they were after the boy’s 16-year-old brother.

Police said 18-year-old Michael Barton was stabbed to death 12 hours earlier outside his home in the 800 block of North 80th St.

Police said they caught the alleged killer, identified as Rodney Lewis, when he returned with a shotgun to shoot Barton’s other family member. He was charged with first- degree murder on Tuesday.

Authorities said five men were also struck during a shoot-out in the parking lot of Club VIP early Sunday morning. Three of the victims died.

After the incidents, police said they planned to hire at least six more officers to help to make up for dwindling aid from state and federal agencies.

"We're looking for help wherever we can get it. If we need to call in the National Guard at some point, we won't stop short of doing whatever is necessary to safeguard our children and safeguard our city."