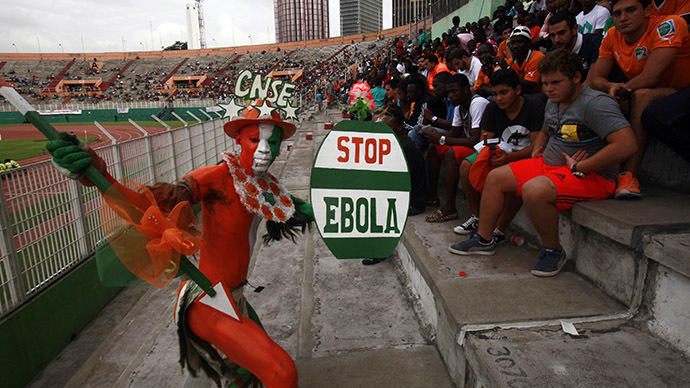 Morocco has rejected an ultimatum and refused to host the 2015 Africa Cup of Nations in January over the fear that Ebola virus may find its way into the country with the crowds of football fans and easily spread among them during the mass sporting event.

“The decision is dictated by health reasons because of the serious threat of Ebola and the risk of its spreading,” said a statement from Morocco's sports ministry on Saturday, the last day when the country was supposed to confirm the hosting of the championship.

The Moroccan government is concerned that a flow of football fans from West Africa could bring the disease to the Ebola-free country and has been asking the confederation to postpone the event until June – and if the virus continues to spread, to January 2016. U.S. soldiers train foreign and local health workers in the management of Ebola at a treatment unit at Liberia's police academy in the capital Monrovia, November 7, 2014. (Reuters/James Giahyue)

The fate of the 16-team tournament, scheduled on January 17-February 8, 2015, will be decided next week when Confederation of African Football (CAF) executives meet in Cairo on Tuesday. CAF could either move the event to another country or cancel it, as so far no country has volunteered as an emergency host.

The Confederation accused Morocco of alarmism and exaggerating the Ebola threat, among other arguments, claiming that “there is unlikely to be a team from the worst affected area in the finals,” according to Reuters.

But besides the medical risks, the decision was also motivated “by humanitarian reasons” since it is the host’s responsibility “to welcome all our guests and supporters in the best conditions,” the Moroccan government statement added.

Meanwhile, African Union officials and business leaders met in the Ethiopian capital to launch the emergency response fund. So far it has managed to raise $28.5 million to fight Ebola.

According to the latest official UN figures, the Ebola outbreak in West Africa has killed 4,950 people out of the 13,241 infected, mostly in Sierra Leone, Liberia and Guinea.