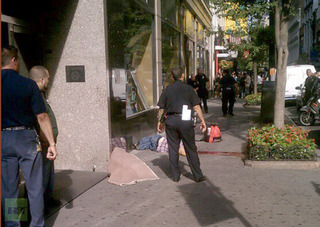 A laid-off designer fatally shot a former co-worker in the head outside the Empire State Building and injured nine more people before he was killed by police.

The suspect, preliminarily identified as Jeffrey Johnson, 53, was a "disgruntled former employee" of a company located outside the Empire State Building, New York Police Commissioner Ray Kelly said. Hazan Imports, where Johnson worked as a desinger of women's accessories, sacked him roughly a year ago.

Shooting his former colleague in the head three times at a close range, he attempted to flee the scene.

Witnessing the incident, a construction worker alerted two police officers, who pursued Johnson down 33rd Street, where he sustained a fatal shot from the police and died. A .45 caliber gun was found near his body.

Two women and seven men have been wounded or grazed in the incident inside the lobby of the Empire State Building and in the street. The FDNY says their conditions range from minor injuries to not urgent.

"Some may have been accidentally shot by police officers," Kelly said.

People at the scene say at least seven shots were heard near the intersection of 33rd Street and Fifth Avenue at 9:04 am local time (13:00 GMT).

"By the time I got there that man was lying dead, I was three feet in front of him. I heard a noise of like seven shots go off I thought it was a truck delivering materials, like they do in the morning. But when I turned my head I saw a man fall and he had a helmet in his hand so I just ran and I told everyone to run," an eyewitness told The Guardian.

The other deceased person is reported to be a 41-year-old male. Images from the street show the dead body of a middle-aged white man wearing jeans and a checked shirt; a red and black backpack is lying near him.

Arriving at the scene, Mayor Bloomberg said there was no connection to terrorism.

"It is a murder," he told a press-conference. The Mayor also praised police and civilians for their quick response and stressed the investigation has only started, so no data can be treated as final yet.

The FBI and police have drawn multiple forces to the scene. The area is cordoned off with the law enforcers not allowing people either to enter or leave the scene. 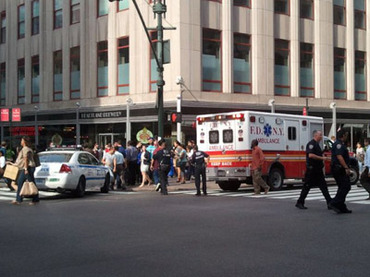 The body of a man lies on the sidewalk near the Empire State Building following a shooting in New York August 24, 2012. (Reuters/James Bolden)

A shooting victim lies covered on the ground at West 33rd St. after a shooter opened fire near the Empire State Building August 24, 2012 in New York City. (Andrew Kelly/Getty Images/AFP)

Bystanders and police look on as a man lies on the sidewalk after a shooting incident near the Empire State Building in New York August 24, 2012. (Reuters//Mickey C. Marrero)

Great Pictures on this, RT did a Great Job!