“Energy” Drinks Are More Dangerous Than You Think!

IT IS ADVISED NOT TO CONSUME THESE DRINKS. THEY ARE  VERY DANGEROUS DRINKS.

It is  a public health safety, please pass on this article to all the contacts in your address book especially those with teenage children, and make copies to show to all the people you know.

This drink is SOLD in all the supermarkets IN OUR country.  and our children ARE CONSUMING IT ON A TRIAL BASIS.. IT can be mortal.

RED BULL was created to stimulate the brains in people who are subjected to great physical force and in “stress coma” and never to be consumed like an innocent drink or soda pop. RED BULL IS the energizer DRINK that is commercialized world-wide with its slogan:
‘It increases endurance; awakens the concentration capacity and the speed of reaction, offers more energy and improves the mood. All this can be found in a can of RED BULL, the power drink of the millennium.!

‘Red Bull has managed to arrive at almost 100 countries worldwide.  The RED BULL logo is targeted at young people and sportsmen, two attractive segments that have been captivated by the stimulus that the drink provides.

It was created by Dietrich Mateschitz, an industrialist of Austrian origin who discovered the drink by chance. It happened during a business trip to Hong Kong , when he was working at a factory that manufactured toothbrushes.

The liquid, based on a formula that contained caffeine and taurine, caused a rage in that country. Imagine the grand success of this drink in Europe where the product still did not exist, besides it was a superb opportunity to become an entrepreneur.

BUT THE TRUTH ABOUT THIS DRINK IS ANOTHER THING:

FRANCE and DENMARK have just prohibited it as a cocktail of death, due to its vitamin components mixed with GLUCURONOLACTONE’, a highly dangerous chemical, which was developed by the United States Department of Defense during 60 years to stimulate the moral of the troops based in VIETNAM, which acted like a hallucinogenic drug that calmed the stress of the war.

But their effects in the organism were so devastating, that it was discontinued, because of the high index of cases of migraines, cerebral tumors and diseases of the liver that was evident in the soldiers who consumed it.

And in spite of it, in the can of RED BULL you can still find as one of its components: GLUCURONOLACTONE, categorized medically as a stimulant..

But what it does not say on the can of RED BULL, are the consequences of its consumption, and that has forced us to place a series of WARNINGS:

1. It is dangerous to take it if you do not engage in physical exercise afterwards, since its energizing function accelerates the heart rate and can cause a sudden attack.

2. You run the risk of undergoing a cerebral hemorrhage, because RED BULL contains components that dilute the blood so that the heart utilizes less energy to pump the blood, and thus be able to deliver physical force with less effort being exerted.

3. It is prohibited to mix RED BULL with alcohol, because the mixture turns the drink into a “Deadly Bomb” that attacks the liver directly, causing the affected area never to regenerate anymore.

4. One of the main components of RED BULL is the B12 vitamin, used in medicine to recover patients who are in a coma; from here the hypertension and the state of excitement which is experienced after taking it, as if you were in a drunken state.

5. The regular consumption of RED BULL triggers off symptoms in the form of a series of irreversible nervous and neuronal diseases.

With widespread alarm about deaths linked to alcohol-and-caffeine-laced commercial drinks like the fruity malt beverage Four Loko, it’s easy to overlook problems that may be linked to the so-called energy drinks that spawned them.

But a number of scientists are worried about highly caffeinated beverages like Red Bull, Rockstar, Monster and Full Throttle, which are popular among teenagers and young adults.

The often bizarre combination of ingredients in these drinks prompted three researchers from the in University of Texas   Health Science Center at Houston and the University of Queensland in Australia to examine what is known — and not known — about the contents of these beverages, which are sold alongside sodas and sport drinks in supermarkets, drugstores and highway rest stops.

Their review of all the studies in English in the scientific literature, published in November in The Mayo Clinic  Proceedings, led them to question both the effectiveness and safety of energy drinks.

The researchers noted that the drinks contain high levels of caffeine and warned that certain susceptible people risk dangerous, even life-threatening, effects on blood pressure, heart rate and brain function.

The authors noted that “four documented cases of caffeine-associated death have been reported, as well as five separate cases of seizures associated with consumption of energy/power drinks.” Additional reports include an otherwise healthy 28-year-old man who suffered a cardiac arrest after a day of motocross racing; a healthy 18-year-old man who died playing basketball after drinking two cans of Red Bull; and four cases of mania experienced by individuals known to have bipolar disorder.

Using an abbreviation for energy beverages, Dr. John P. Higgins and co-authors wrote in the Mayo journal that because “teens and young adults, both athletes and nonathletes, are consuming E.B.’s at an alarming rate, we need to determine whether long-term use of E.B.’s by this population will translate into deleterious effects later.”

His co-author Troy D. Tuttle, an exercise physiologist at the Houston university, said in an interview: “Almost all the studies done on energy drinks have involved small sample sizes of young, healthy individuals in whom you’re unlikely to see short-term ill effects.

“But what about the long term? What about liver and cardiovascular disease, insulin resistance and diabetes? We could speculate about a lot of possible problems, but we just don’t know.”

He urged the Food and Drug Administration to “step in and regulate this market,” which currently has few restrictions on the kinds and amounts of ingredients and the claims that are made about them. Manufacturers have labeled the beverages “dietary supplements,” which absolves them of the federal regulations that govern sodas and juices and allows producers to make “structure and function” claims, like “Enhances athletic performance” and “Increases caloric burn and mental sharpness.” As Mr. Tuttle described the marketing strategy for energy drinks, “the companies have taken a cup of coffee — or two or more cups of coffee, added a lot of hip-sounding stuff and marketed it with a hot, modern, trendy push for young people who want to look cool walking around with a can of Red Bull.

In an e-mailed statement, the American Beverage Association said, “Most mainstream energy drink brands voluntarily put statements on their containers, including advisories about use by people sensitive to caffeine.” Also, the organization said many of its members voluntarily list the amount of caffeine on their product labels or have provided caffeine content information through their Web sites and consumer hot lines.

Kevin A. Clauson, a doctor of pharmacy at Nova Southeastern University in West Palm Beach, Fla., who had previously reviewed safety issues surrounding energy drinks said that his main concerns were “the amount of caffeine, which can be injurious particularly to people with a pre-existing cardiovascular abnormality” and “the effects of these drinks when they are combined with alcohol, which can have disastrous consequences.”

After several states made moves to ban Four Loko, it was reformulated to remove the caffeine and two other ingredients, guarana and taurine, but Dr. Clauson said that was “unlikely to have a substantial impact” on young people, who will continue to combine alcohol with energy drinks. The caffeine and caffeinelike ingredients in these drinks can mask the perception of inebriation — and that can increase the risk of drunken driving or other dangerous behaviors.

Mr. Tuttle, who works with sports teams, is concerned about the effects of energy drinks on athletic performance. “A lot of kids are reaching for energy beverages instead of sport drinks, which unlike the energy drinks are mostly water with a nominal amount of sugar and electrolytes,” he said. “The energy drinks contain a slew of ingredients, most of which are unresearched, especially in combination with one another.” 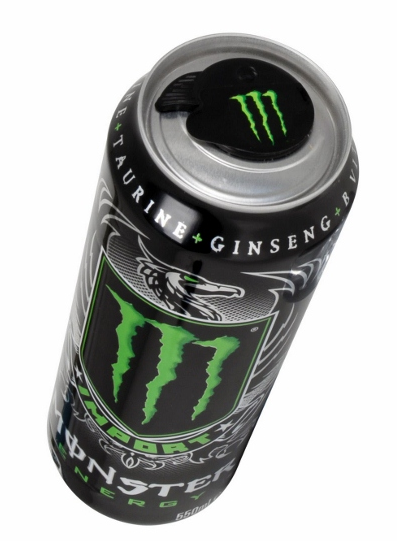 For an athlete engaged in intense exercise, the high doses of sugar in energy drinks can impair absorption of fluids and result in dehydration. A 16-ounce can of an energy drink may contain 13 teaspoons of sugar and the amount of caffeine found in four or more colas. Mr. Tuttle noted that caffeine, which is known to improve muscle action and performance, especially in endurance activities, is banned in many sports competitions. Thus, consuming an energy drink close to an event could disqualify an athlete.

“The B vitamins, which are important enzymes for energy utilization, are added to legitimize the high levels of sugar,” he said. “But the American diet, which is very high in protein, already has plenty of B vitamins. These drinks are a kind of sensory overload for the body, with too much stuff coming in at the same time.”

Adding alcohol to the mix, as some consumers were doing even before drinks like Four Loko came along, can be a recipe for disaster. Under the stimulation of energy drinks, people may think they are sober when they are not. Such was the fate of Donte’ Stallworth, a wide receiver for the Cleveland Browns who killed a pedestrian with his car in March 2009 after drinking multiple shots of tequila and a Red Bull. Mr. Stallworth said he did not feel intoxicated at the time of the accident.

“Caffeine is being treated as a flavoring agent, not a drug,” Dr. Clauson said. “The average healthy person who consumes one serving of an energy drink is unlikely to encounter difficulty.” Those most likely to get into trouble, he said, are “toxic jocks” who overindulge and those with an underlying heart condition.