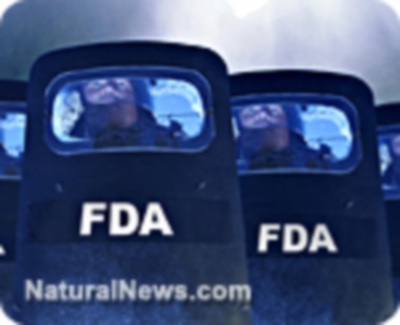 At the prompting of the U.S.Food and Drug Administration(FDA) as part of its ongoing war against natural cancer treatments, federal marshals recently seized a number of anti-cancer products fromNotions-n-Things, a Bogard, Missouri-based distributor of skin salves and other products. According to an FDA announcement issued on March 29, 2012, more than 1,600 containers of skin salve were seized as part of the bust.

A complaint filed by a user of one of the now-seized products back in January originally prompted the FDA to inspect theNotion-n-Thingsfacility. TheMissouri State Department of Health and Senior Serviceseventually embargoed the products in question, and on March 27, 2012, Judge Gary A. Fenner from the U.S. District Court for the Western District of Missouri signed the official seizure order.

The three products seized wereChickweed Healing Salve, a wild-crafted, cold-infused skin care product that contains comfrey, a natural treatment for skin cancer (http://chickweedhealingsalve.com/);To-Mor-Gone, a product that allegedly helped treat cancer; andR.E.P., a treatment for headaches and sinus infections that the FDA says did not contain ingredient information on its label.

None of these products had been officially approved by the FDA as safe and effective for their intended uses, which means the agency considers them to be unapproved drugs. Regardless of whether or not these products actually worked, the FDA says they were "misbranded" under the guidelines of theFederal Food, Drug and Cosmetic Act.

Speaking on behalf of the agency, Dara A. Corrigan, an associate commissioner for regulatory affairs at the FDA, admitted that one of the FDA's primary concerns with the three products, and others like them, is that cancer patients will choose them over so-called "effective and proven treatment[s]." Only treatments that have received rubber-stamp approval from the FDA, in other words, are considered to be valid -- the public has no freedom of choice in the matter.

As far back as 2001, the FDA has taken issue with comfrey, also known asSymphytum officionale, which is often used in skin salves for healing purposes. At that time, the agency sent a letter to several natural medicine groups warning them about comfrey's supposed dangers when ingested, even though comfrey is primarily used topically.