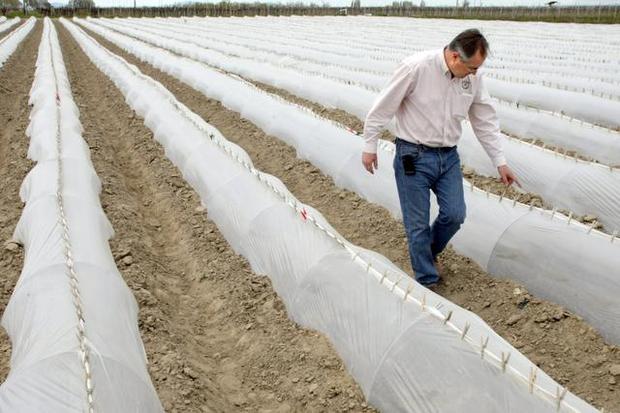 Delivering a major blow to state-licensed pot growers in Washington state and Colorado, the U.S. Bureau of Reclamation said today it will not allow any federally-controlled water to be used on marijuana crops.

“As a federal agency, Reclamation is obligated to adhere to federal law in the conduct of its responsibilities to the American people,” said Dan DuBray, the agency’s chief of public affairs.

Growers in Colorado will be less affected because the state allows only indoor pot farms.

The ruling makes clear that the Obama administration is willing to set limits on the states’ legalization experiments, even though the Justice Department said in August that it would not block their plans to tax and sell the drug.

The agency agency began informing members of Congress of its decision at 11 a.m. today.

DuBray said the federal agency will conduct its operations “in a manner that is consistent with the Controlled Substances Act,” which bans marijuana.

And if the agency becomes aware of any federally-controlled water being used on marijuana crops, it will refer cases to the Department of Justice for possible prosecution, he said.

DuBray said the agency’s policy will apply to all of its locations in the 17 Western states it serves, including states that have decriminalized or authorized the cultivation of marijuana. Washington state and Colorado are the only two states that have approved marijuana for recreational use, while 21 others have laws allowing it to be used for medical purposes.

The Bureau of Reclamation had been studying the issue with the Justice Department since last month, after local officials in both Washington state and Colorado asked for a legal analysis.

Anticipating that the ruling may not go their way, Washington state officials had already been discussing other ways that growers could get water. 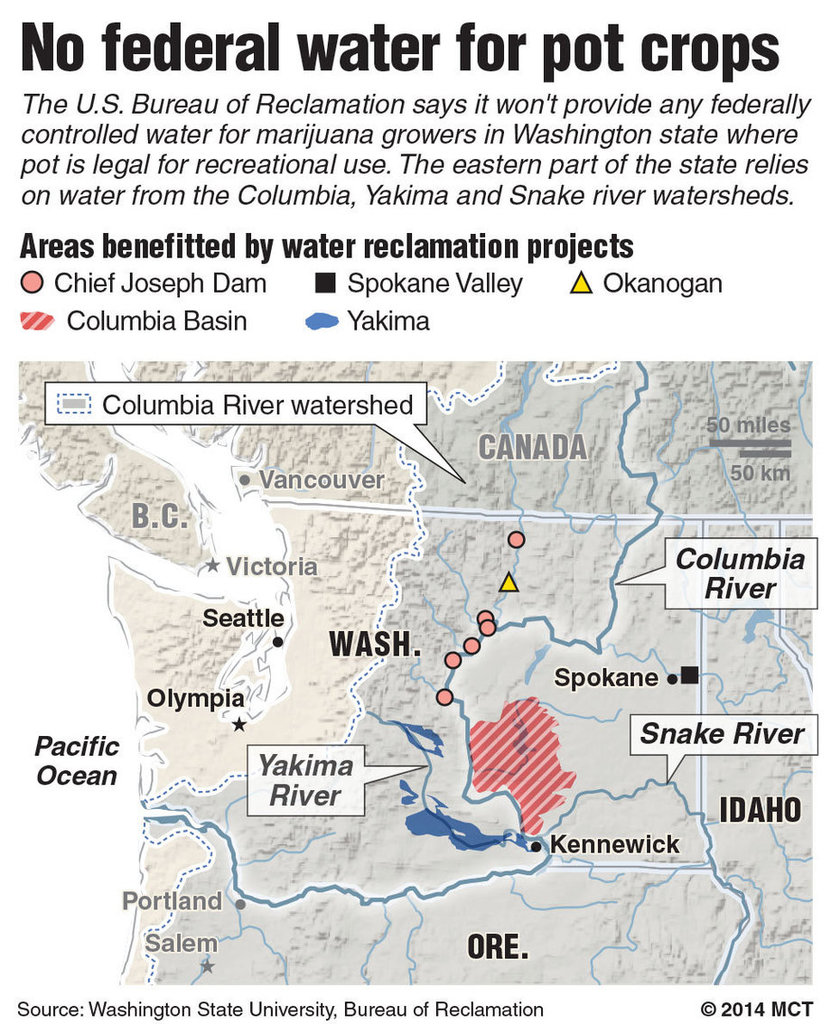 Last month, Joye Redfield-Wilder, spokeswoman for the Washington state Department of Ecology, said that with most of growing operations are expected to be fairly small, growers may be able to drill their own wells or tap into a city water supply. Under state law, greenhouse growers can use well water if their operations use no more than 5,000 gallons of water per day, she said.

“It may or may not be a problem at all,” Redfield-Wilder said.

Growers have been figuring out how they might react, too.

With marijuana being so valuable, licensed growers won’t be deterred by the federal government, said Alan Schreiber, a Franklin County farmer who has applied for a license to grow marijuana for pest-control research.

“This is an annoyance and a nuisance but I can assure you _ I can assure you _ they will find water for this,” Schreiber said last month. “Water, relatively speaking, is not that expensive. You can get it from a well. You can find somebody. There’s wells everywhere around here.”

The Bureau of Reclamation, the nation’s largest wholesaler of water, is a key federal agency in the West, best known for the dams, canals and power plants it has built in the 17 states it serves.

Created in 1902 to promote economic development, it’s now part of the Department of Interior and delivers water to more than 31 million people and one out of every five Western farmers. It contracts with local irrigation districts to provide the water.

In Washington state, the agency provides irrigated water to roughly 1.2 million acres of land. Much of it comes from the Columbia and Yakima rivers, providing water for the state’s prime farmland.

Read the Maximus of law and trust law. We are under natural laws always have been they have disillusioned into  believing their lies. God law is supreme no man can take these from you. Ever!  If you signed their contracts of your enslavement get them expunged and denounce all your signatures by affidavit. To learn the method see: SEDM.org they have everything. Dean Clifford is an expert to with many resources on freedom methods. He went to jail for 1 days but he did this only by his attempt to try something new in court to see if it would work. He challenges them to learn more ways to get AROUND THEIR FAKE LAWS. it's ALL PART  of the game they play. You see most people don't know the truth because they have programmed us into believing we need a driver's license when in fact unless you work for the Government in commerce you don't need one. You don't need a social security number to work either. You just enrolled yourself in their corp. and now need a driver's license. Don't vote if you vote for the corporation you commit treason to your native country. They won't help you as an accomplice, get out of the system now. You get your disability, we have a different trust. Called a live birth record not a birth certificate but you can take over as the executor of that trust to. We created the LBR your mother made it for you. The Gov. created the birth certificate for them to use you as their surety to float their note.

I would be rebutting their assumption's to owning anything than what they are allowed which is forts and only small part of any nation state. They do not have this control. They have a bluff up and people need to rebut their assumption's. Get the law straight and conquest these thieves