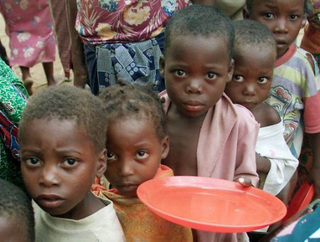 Talk about a total contrast. This beautiful pictorial rebuke is a first hand encounter with the insane reality of the crippling Gates-backed vaccine push in Africa, against the backdrop of loving individuals taking real action to help alleviate the real problems and needs of their fellow man.

I can’t imagine a greater exposé.

Before I went to Uganda, I knew all about Bill Gates and his billion dollar vaccine campaign. I had read the stories of him going into remote African villages and vaccinating children with the measles vaccine at gunpoint. I knew about the thousands of cases of children in India becoming paralyzed after receiving his polio vaccines. I’ve researched the African children coming down with the mysterious “nodding” disease immediately after vaccination. I’ve listened to the interviews where Bill Gates calls his vaccine campaign “population control”.
But like most things, we don’t really believe it until we actually see it.

During my time in Uganda, I saw it.

It wasn’t 10 minutes down the road from the airport, that I saw all the big banners hanging. Bill Gates vaccine campaign had been in town the week earlier. Big posters reading “Any child under 5 can come get free polio & measles vaccines”. Woo-hoo. Nice, I thought.  Well at least that happened the week before. I did not want to witness it. And then I witnessed it.

We spent one of our days in a village in a remote area, at the home of a young lady who raises 26 orphaned kids. She also runs a school with about 96 kids.

The students did a skit for us. They held up signs that represented their current childhood epidemics. Yellow Fever, Malaria, HIV/AIDS, Diarrhea, etc.. then the skit showed how the body fights sickness through white blood cells. One of the kids was the “white blood cell body guard” that protected the body. It was a very cute skit and informative.

None of the children held up signs that said “Autism” or “Asthma” or “Allergies” or “ADHD”. Or any other autoimmune disorder that is currently affecting 1 in 6...

The children in Uganda also don’t receive 49 doses of 14 vaccines.

They also didn’t hold up signs that said “Whooping Cough” or “Measles” or “Polio” or “Chicken Pox” or “Hep B”. Nope. None of those.

The children in these remote villages are sick and dying from malnutrition and unsanitary living conditions. They are not dying from undervaccination and they are certainly not injured from over-vaccination.

They drink the same water they bathe in.

That water comes from dirty stagnant water sources. They bathe on a dirt floor.

They eat outside on the same dirt floor.

The photo below shows the outdoor kitchen where the children eat ONE meal a day. 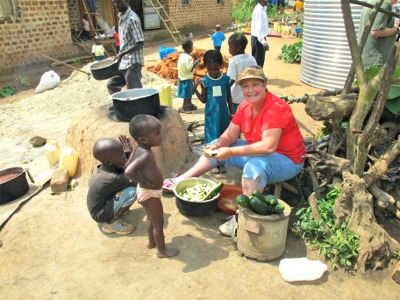 And the naked little girl was suffering from measles. I asked why.

I was told that someone came into the village 2 weeks prior and gave the kids measles vaccines. Now the little girl has measles. They kept putting her in a tub of water to help with the itching. It was truly heartbreaking to witness.

With no medical means to care for her illness, they are left to deal with the aftermath of what we call “preventative healthcare”. Ha!

I don’t care who you are or what side of the vaccine philosophy you fall under, there is no logic in the world that can explain going into a remote village with children who only eat one meal a day and have never had clean drinking water … and giving them a vaccine. Seriously?

Think about it. Can you imagine walking up to this precious little girl and saying: ”I know you are starving, but here is a measles vaccine instead. I promise this will make you much healthier than food or water”.

It’s a scary day when simple logic no longer exists.

And innocent children suffer the consequences.

Here’s what we did. We showed them what preventative healthcare really looks like.

We gave them a water system (shown above).

And we gave them a cow and a year’s worth of rice & beans.

And we painted their finger nails. Because little girls want to feel loved and pretty.

And we loved on the little girl with measles and tried to help her stop itching.They want to know people really do care about them.

They don’t want to walk around their remote villages hungry, and the only people who show up are people who are there to stick a needle in their arm and make them sick.

Every now and then, when I write a post, I’m just plain mad.I like to refer to it as Righteous Anger.

“Speak up for those who cannot speak for themselves,
for the rights of all who are destitute.
Speak up and judge fairly;
defend the rights of the poor and needy”
—Proverbs 31: 8-9        http://www.zengardner.com/food-water-nope-vaccines-yep/