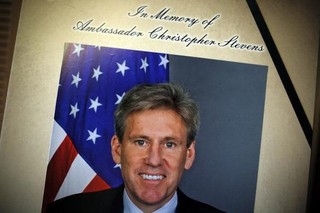 Dr. Mark Christian, a former Islamic Muslim Brotherhood member who is now a Christian, account of actual events was picked up on Saturday by Bare Naked Islam, which President Obama has known from the beginning of who was responsible for the Islamic terrorists attack on Benghazi on September 11, 2012.

Bare Naked Islam picked up the story, first presented on the Gateway Pundit, that while the Obama administration has been stalling the investigation for the past 11 months, Christiansaid, “Syrian president Bashar el Assad, Russia, Iran, and Hezbollah of Lebanon are fully responsible for the death of United States Ambassador Christopher Stevens. President Obama has known this fact since the minute he first learned about the attack.”

He further said, “Stevens, from his Benghazi base, was stockpiling weapons – and resourcing the expert fighters who could use them – to topple Assad’s rule in Syria. On September 11, 2012, Assad powerfully punched back, raiding the Benghazi compound which housed the armament for his own destruction.”

“The Assad regime was fully aware of the shrouded activity in Benghazi, fully aware that Ambassador Christopher Stevens, the man credited for the assassination of Gaddafi, was much more than an ambassador… If Americans knew what really happened, if the mainstream media uncovered and exposed Obama and his Sunni agenda, Obama would not be the current American president, but a prosecuted American citizen.”

The damaging allegations, mostly ignored by the left-wing mainstream media, have been reported in the past several months by various alternate news organizations such as the Gateway Pundit, the Paulding County Republican Examiner, the Blaze, Walid Shoebat, and Breitbart news since October of 2012.

The Paulding County Republican Examiner reported on a series of news accounts implicating Obama and his administration of their involvement and cover-up of the Benghazi attacks.

On October 23, 2012, the Paulding County Republican Examiner reported that it was to act as official U.S. government liaison to Al-Qaeda linked Jihadist militias, the same Islamic Jihadist now trying to overthrow Assad in Syria.

Then two days later, a report came out that then, Secretary of State Hillary Clinton had ordered more security at the U.S. mission in Benghazi before it was attacked where four Americans, including U.S. Ambassador Christopher Stevens were murdered by Al-Qaeda, but President Obamadenied the request.

In a report, a week before the 2012 presidential election, a former CIA counterintelligence officer and expert on covert action, Libya, and Islamic extremism, Kent Clizbe said, “The Libyan operation is cloaked in secrecy and the legacy media erected a wall of silence to protect Obama-Hillary. No details leak out about the foreign forces involved in the civil war. Foreign troops are invisible. Even the composition of the Libyan rebels has been cloaked by the media.”

“The Obama administration knew exactly what they were doing in the Middle East and in Libya and with the tragedy at the U.S. Consulate in Libya, deception is in play.”

Two days before the 2012 presidential election on November 5, 2012, the Paulding County Republican Examiner reported on a report by Walid Shoebat, a former Muslim Brotherhood member, that anti-Al Qaeda Libyans had revealed that the Obama administration has assisted Al-Qaeda in Benghazi.

“The Obama administration knew exactly what they were doing in the Middle East and in Libya and with the tragedy at the U.S. Consulate in Libya, deception is in play.”

Moreover, President Obama’s financial aid to the Palestinians, despite the threats by Hamas to Israel, coincides with the cover-up on Benghazi, which also points to the fact that the Palestinians are as one Hamas official explained, are not Palestinians, but are of Egyptian and Saudi descent, all with Arab and Muslim Brotherhood ties.

President Obama interfered and helped the Egyptian Jihadist overthrow the former Egyptian President, Hosni El Sayed Mubarak, and the hijackers that attacked the World Trade Center towers in New York on September 11, 2001; most were from Saudi Arabia.

When the Center for Security Policy held a panel discussion on the Benghazi attack on November 2012, shortly after President Obama won his reelection, one of several questions were asked.

The two main central questions remain, “The CIA’s Benghazi station was reportedly engaged in a covert operation aimed at helping an international effort to arm the so-called “Syrian opposition” by shipping weapons recovered from “liberated” Qaddafi-era caches. If, as the New York Times has reported, the bulk of the armaments being sent to the “rebels” in Syria by Turkey, Qatar, and Saudi Arabia are winding up in the hands of the most radical Islamist elements, some supplied by us are likely reaching al- Qaeda operatives, as well. Has the Obama administration been secretly arming Syria’s opposition, including al-Qaeda and/or other radical Islamist's?”

“And did President Obama order the U.S. military not to come to the aid of Americans under attack on 11 September 2012?”