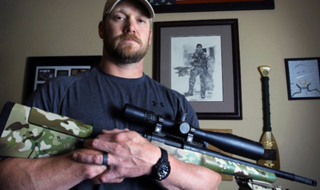 Chris Kyle and fellow war veteran Chad Littlefield were killed Saturday afternoon. US military's most prolific sniper wrote bestselling memoir on his four tours in Iraq and was known for helping veterans with PTSD.

A former Navy Seal who went on to write a bestselling book chronicling his life as the US's most prolific marksman has been shot dead at a gun range in Texas.

Police said Sunday that the body of Chris Kyle was found by officers responding to an incident at the Rough Creek Lodge in Glen Rose the previous evening. Chad Littlefield, a 35-year-old friend of the war veteran and author, was also killed at the scene.

In a statement, Sergeant Lonny Haschel said Eddie Ray Routh, 25, of Lancaster, had been charged with two counts of murder in relation to the double shooting. The alleged gunman was found at his home just hours after the shooting, having earlier fled the gun range in a pick-up truck, it is claimed.

Haschel said the link between the men was not immediately clear. Routh was being held on Sunday at the Erath County jail on a combined $3m bond, authorities said.

Kyle was a veteran of four tours of Iraq whose shooting during battles in Ramadi and Fallujah earned him the nickname "al Shaitan" or "the Devil" among insurgents who put a bounty on his head.

Kyle drew criticism for drawing attention to his exploits by writing about the 150 insurgents he had killed between 1999 and 2009. The book, American Sniper: The Autobiography of the Most Lethal Sniper in US Military History, became a bestseller.

The US military confirmed on Sunday that Routh was a corporal in the Marines from June 2006 to January 2010, according to the Associated Press. He was deployed to Iraq in 2007 and Haiti in 2007.

Officials investigating the killing of Kyle and Littlefield said that the two men had arrived at the shooting range with the suspect.

They were unable to say whether Routh was suffering from PTSD or had sought treatment. However, at a press conference on Sunday afternoon, Tommy Bryant, Erath County Sheriff said Routh's mother, who is a teacher, may have contacted the men to "help her son" according to the Dallas Morning News.

"We have an idea that that's why they were at the range, for some kind of therapy that Mr Kyle assists people with" Bryant said.

Police said that the three men arrived at Rough Creek Lodge and Resort at about 3.15 pm. Kyle and Littlefield were found dead at about 5pm. After the shootings, Routh drove to his sister's home in Midlothian and told his sister and brother-in-law what he had done, police said. They called the authorities. When they arrived at Routh's home in Lancaster to arrest him, Routh tried to flee in Kyle's pickup but he was later apprehended.

Scott McEwan, who co-wrote American Sniper with Kyle, said he was stunned by his death.

"It just comes as a shock and it's staggering to think that after all Chris has been through, that this is how he meets his end, because there are so many ways he could have been killed" in Iraq, McEwen said.

Trevor Cox, the director of Fitco Cares, a foundation Kyle helped establish for veterans with post-traumatic stress disorder, described Kyle as a humble man who wanted to serve his country and help other and who died "doing what filled his heart with passion – helping soldiers struggling with the fight to overcome PTSD".

Cox said that Routh had not come through Fitco Cares.

He said, however, that Kyle and Chad, who were neighbours, also worked with veterans in their own time.

Asked whether it was part of the organisation's program to take veterans to gun ranges, Cos said: "We haven't ever done a shooting event, but in my opinion I don't think there's anything inappropriate in what he was doing something a lot of military people enjoy. This was a senseless act."

"It's important that we continue his legacy and continue to serve veterans fearlessly."

In a statement on the website Fitcocares.org, which is co-ordinating condolences for Kyle, Cox described the former Navy Seal as a hero for his efforts in combat and at home.

"My heart is breaking" said Cox, in the statement. "Our foundation, Fitco Cares, this country and most importantly, his wife Taya and their children, lost a dedicated father and husband, a lifelong patriot and an American hero."

"Chris died doing what he filled his heart with passion – serving soldiers struggling with the fight to overcome PTSD."

In an interview last year with NBC News, Kyle said he didn't want to put the number of kills in the book but the publisher insisted.

"If I could figure out the number of people I saved, that's something I would brag about," he told NBC News' Lester Holt.

At the time of his death, the former Seal was being sued by Jesse Ventura, the former Minnesota governor and ex-professional wrestler, over claims in the book that Kyle punched him in a 2006 bar fight over unpatriotic remarks.

Ventura says the punch never happened and that the claim by Kyle defamed him.

A trial was due for August this year.