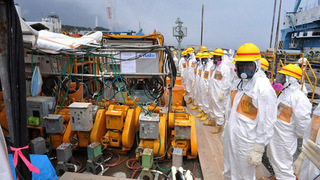 As 300 tons of contaminated water flow daily into the Pacific from the crippled Fukushima nuclear plant, Japan’s government is working in crisis mode to make sure the leak, which the Tokyo Electric Power Company (TEPCO) has failed to contain, is sealed.

Recent shocking reports confirmed by government officials have revealed that for two years since the March 2011 earthquake that triggered the Fukushima disaster, hundreds of tons of groundwater running under the damaged power plant are being mixed with toxic water used to cool its reactors and then leak into the Pacific Ocean.
Officials and the public have lashed out at the Fukushima operator TEPCO for failing to cope with and report on the situation, which the country’s nuclear watchdog NRA has described as an“emergency.”

14:40 GMT: The level of the contaminated radioactive groundwater under the crippled Fukushima nuclear power plant has risen 60cm above the protective barrier, according to the plant’s operator TEPCO.
This is the main reason why the water is freely leaking into the Pacific Ocean, the operator said.
TEPCO and the Agency for Natural Resources and Energy of the Ministry of Economy, Trade and Industry of Japan are to decide on the urgent strengthening of the protective barrier. Blair Thornton, associate professor at the University of Tokyo's Institute of Industrial Science Underwater Technology Research Center, points at a video of the Fukushima Daiichi nuclear plant (F1NPP) operated by the Tokyo Electric Plant during a research trip, in Tokyo August 8, 2013. (Reuters/Toru Hanai)

TEPCO announces it started pumping out contaminated groundwater from under the Fukushima nuclear power plant. The company managed to pump out 13 tons of water between 2pm and 8pm local time on Friday. TEPCO said it plans to boost the pumped-out amount to some 100 tons a day with the help of a special system, which will be completed by Mid-August.

18:30 GMT: The International Atomic Energy Agency (IAEA) says it closely follows the leak of radioactive water from Fukushima nuclear plant into the sea and is ready to provide help if necessary.
"Japanese authorities have explained their planned countermeasures against current leakage and further leakages," IAEA’s director of public information, Serge Gas, said in a statement.
He noted that the IAEA had already provided recommendations to Japanese authorities on how to manage liquid waste, and that a report from a mission in April had encouraged TEPCO to review its strategy for handling water that had accumulated at the site. 18:05 GMT: Japanese prosecutors are unlikely to press charges against former prime minister Naoto Kan and utility executives over their handling of the 2011 Fukushima nuclear disaster after complaints filed by affected citizens, Japan’s Asahi newspaper reported.
The prosecutors questioned Kan, who was prime minister at the time of the disaster, and former TEPCO president Masataka Shimizu. The lawyers concluded that it was difficult to prove that they could have predicted such a big earthquake and tsunami or establish a causal relationship between the nuclear disaster and deaths and injuries among evacuees.
A formal decision by the prosecutors is likely to be announced as early as this month, the paper added.

The Fukushima plant is leaking contaminated water at a rate of 300 tons per day, the Japanese government reported. Tokyo estimates that the cleanup of the disaster would take more than 40 years and cost some $11 billion.

TEPCO confirmed the leak but refused to confirm the quantity being emitted from the plant.

"We are not currently able to say clearly how much groundwater is actually flowing into the ocean,"Tokyo Electric Power spokesman Noriyuki Imaizumi said.

TEPCO estimated that there are more than 20,000 tons of highly-contaminated water in the drainage system of the Fukushima plant. This water seeping through the crack in the drainage tunnels is responsible for the hike in levels of radioactive isotopes in ground and ocean water near the crippled plant. Japan’s Nuclear Regulatory Authority (NRA) says it can no longer leave to TEPCO’s the task of containing radiation-contaminated water at Fukushima plant.

"Right now, we have an emergency," admitted Shinji Kinjo, the head of the organization.

A strong undersea earthquake has hit off the coast of Miyagi prefecture. The epicenter was 50km below the seabed. The quake struck at approximately the same location where the 9.0 magnitude quake hit in March 2011, devastating the Fukushima nuclear plant. The damaged reactors were not impacted by the tremors on Sunday, TEPCO reported.

A TEPCO official quoted by a Japanese media says the contaminated groundwater could reach the surface and freely flow into ocean within three weeks. To prevent a massive leakage into the Pacific it would require 100 tons of water to be pumped out daily – something TEPCO cannot achieve until the delivery of equipment at end of August. Meanwhile, it is not clear where the contaminated water would be stored as more than 85 percent of Fukushima’s 380,000 tonne storage capacity is already full. Water samples taken at an underground passage below the Fukushima nuclear power plant showedextreme levels of radiation comparable to those taken immediately after the March 2011 catastrophe, TEPCO reveals in a statement. The tested water, which had been mixing with ground water and flowing into the ocean, contained 2.35 billion Becquerels of cesium per liter – some 16 million times above the limit.

The operator of Fukushima Daiichi nuclear power plant, TEPCO, admits that crippled plant’s reactorscontinue to leak highly contaminated radioactive water into the Pacific Ocean. Earlier TEPCO had claimed that while it was struggling to find enough storage space for contaminated water and detected soaring levels of radioactive cancer-causing cesium in ground waters under the plant, seawater data had shown “no abnormal rise in the levels of radioactivity.”