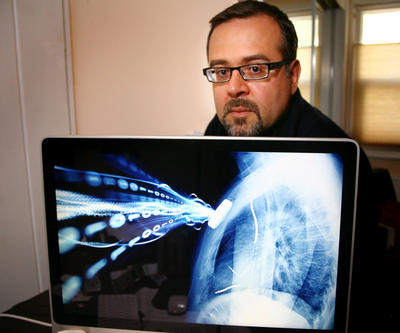 Warrantless electronic surveillance of alleged “dissidents,” “pre-criminals” or “undesirables” is funneled by military contractor personnel to team leaders of neighborhood watch and community policing units -- often police and firefighters -- who direct civilian volunteers to commit acts of stalking, home intrusion, vandalism, poisonings and sadistic “gaslighting.” These malicious, deviant acts are custom-tailored to inflict psychological terror and physical and financial harm upon thousands of extrajudicially “targeted individuals” -- Americans who are systematically persecuted and neutralized mainly for reasons of hate or ideology.

Government-sponsored grassroots vigilante “black ops” -- including financial sabotage, censorship and disruption of telecommunications -- are coordinated and facilitated nationwide by military contractor Lockheed Martin, operating under contracts with military, security and intelligence agencies and commands affiliated with the 72 regional “threat fusion centers” administered by the U.S. Department of Homeland Security.

Federal agencies and commands are specifically prohibited by government policy from conducting "psyops" -- psychological operations -- that target American citizens.  The fusion censor Gestapo and its affiliated agencies, commands and corporate "partners" chronically violate that prohibition; it is inconceivable that high government officials are not aware of the flagrant flaunting of the "no psyops" rule.

Many of the targets of this domestic genocide are being silently irradiated with harmful, debilitating radio frequencies delivered over a cell tower mounted electromagnetic “directed energy” weapon system deployed on cell towers nationwide -- camouflaged and misrepresented as “surveillance” and the “National Broadband Initiative.” This “ virtual Auschwitz” tortures, impairs, enslaves and slow-kills so-called “targeted individuals” in every state, city and county in America -- covert domestic crimes against humanity that rival the depraved evil of Nazi Germany, but, unlike the Nazi death camps, elude detection by the five senses.

The team leaders who devise the malicious home intrusions, poisonings, vandalism and gaslighting also pre-script elaborate psychopathic stunts intended to unnerve and terrorize their targets, letting them know that their every move, even in the bathroom, is being observed and recorded. For example, soon after this journalist discovered that the porcelain surface of a bathroom sink was badly fractured, he embarked on a search of hardware stores for a porcelain paint that matched the color of the damaged basin. Some days later, he found a bottle of paint that was an exact match -- not in a hardware store, but in a record bin at a frequently visited local thrift store. There is no doubt that the paint was planted there by a vigilante stalker who knew about the chipped sink from fusion center surveillance, which also revealed that he frequented the thrift store.

More recently, this journalist found a single copy of a biography of ill-fated music producer Phil Spector on a “remainder” book shelf of a local dollar store. There were multiple copies of virtually all other titles on display. The journalist had recently purchased a CD collection of Spector’s hit pop songs at the Princeton, NJ Record Exchange, where two “gangstalkers” elbowed him as he was looking at a copy of one of the Spector disks . There is absolutely no doubt that the dollar store copy of the Spector biography was placed on the shelf by a vigilante stalker goon acting under orders of a local fusion center community policing unit team leader, who knew from surveillance that the journalist had purchased a Phil Spector CD.

Tellingly, the only other lone copy of a title that was on prominent display nearby was a non-fiction account of the Columbine High School massacre. It was almost as if the witch-hunters of the fusion center Gestapo were trying to bait his trail with books about notorious killers. Needless to say, this journalist did not take the bait. Nor was this the first time something like this happened. He once observed a lone copy of a book of essays by radical leftists at the same dollar store, another apparent attempt to “bait” a book purchase.

These lame stunts are likely concocted by sociopathic, pea-brained public safety and security officers and agents working on the public’s dime. Most of the “gaslighting” stunts are not nearly as benign. Surveillance data has been used to poison specific food items we have purchased; it appears that stalkers have entered this journalist’s home while he and his wife are “put under” in a deep sleep state -- to taint existing food and water supplies, or, apparently, to replace existing jars and bottles of food and water with pre-adulterated substitutes of the same brand and size.

Warrantless surveillance of fusion center "targets" is also used to vandalize and tamper with prized possessions inside their homes.  This journalist found key parts of a restored piece of vintage home electronics cemented with thread lock, causing damage to the parts and necessitating another repair.  The unit was kept in the bedroom; home intruding goons whose operations are coordinated by Lockheed Martin surveillance operatives apparently removed it while the targets were "kept under" in a deep sleep state by silent electromagnetic radio frequency "neuromodulation" attack.

Thread lock also fouled a wheel stud on a family member's car, preventing the replacement of a missing wheel nut -- apparently removed by Lockheed- directed vandals as part of another elaborate, psychopathic "psyop."

These are not petty, random acts of vandalism. This is a manifestation of a malicious, psychopathic, sociopathic CULT that preys upon persons they have been taught to hate -- persons of different religions or backgrounds, or persons who have been slandered by authority figures as social deviates, radicals or criminals. These domestic terrorist goons operate with impunity, free of any visible interference by local or federal law enforcement, whose own ranks appear to be infected by dedicated crusaders of this security state hate cult. Its mid-Atlantic states headquarters appears to be the MAGLOCLEN-RISS “Intelligence” Fusion Center in Newtown, Bucks County, PA, and the regional centcoms of its prime contractor, Lockheed Martin Information Systems, whose Mission and Combat Support Solutions, aerospace and biometric divisions are located in the Delaware Valley region.

Again, this is no aberration, no case of “bad apples” in the barrel. This organized government domestic terrorism, so palpable in Bucks County, PA and the entire mid-Atlantic region, signifies America’s precipitous descent into a fascist police state that has abandoned the U.S. Constitution and the rule of law in favor of despotic authoritarianism and elitist social control.

The Nazis in Washington DC. wants everyone under their thumb as their slaves for the New World Order, they need us to live in Fear instead of feeling Safe in our homes, there's a bogyman in very closet, even under our beds at night, these elitist are all psychopathy nutcases to say the least. Please wake up everyone while there is still time to round these "Skull & Bones" madmen members up and put them in prison and throwaway the bloody key!!! "BAN ALL SECRET SOCIETIES, IT'S MAYBE OUR ONLY HOPE, PRAYS THE LORD!!!

This is a phenomenon that has been going on for awhile. It is called Group Stalking. Here is a link on the subject.
http://educate-yourself.org/cn/groupstalking17aug05.shtml