Gene Rosen in pictures with the same kids at Obama's gun signing of executive orders! 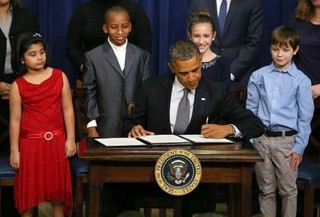 On Wednesday, President Barack Obamaunveiled his gun control plan, signing 23 executive actions (another name for executive orders, which PR agents must have decided sounded too dictatorial) in order “to address gun violence.” His plan is the most restrictive in decades in regards to firearms.

Obama’s plan would implement universal background checks and ban magazines that hold more than 10 rounds. No doubt criminals and gangsters will make sure to obey these laws. More information will also be required to be submitted when gun purchasers undergo a federal background check.

“I will put everything I’ve got into this,” Obama said, with Vice President Joe Biden next to him, who was placed in charge of a task force to come up with plans to disarm the American public. He continued:

This will not happen unless the American people demand it. If parents and teachers, police officers and pastors, if hunters and sportsmen, if responsible gun owners, if Americans of every background stand up and say, “Enough, we’ve suffered too much pain and care too much about our children to allow this to continue,” then change will come. That’s what it’s going to take.

Also surrounding Obama, in an effort to manipulate Americans emotionally and tug on their heartstrings, were children who wrote letters to him after last month’s shooting in Connecticut. Remember, anyone who opposes new gun control hates children.

The plan would also end a so-called “freeze” on research into gun violence by the Centers for Disease Control. Any research by the federal government will either contain manipulated data or will be ignored by the people who wanted it, as past research has shown that guns are used far more often to stop crime than to commit it.

Obama also reiterated his support for Congress to reinstate the “assault weapons” ban that expired in 2004, which Sen. Dianne Feinstein plans to introduce on Jan. 22.

If Texas Rep. Steve Stockman follows through on his threat, there’s the possibility, no matter how minute, that impeachment proceedings could begin against Obama over his executive actions against gun owners.