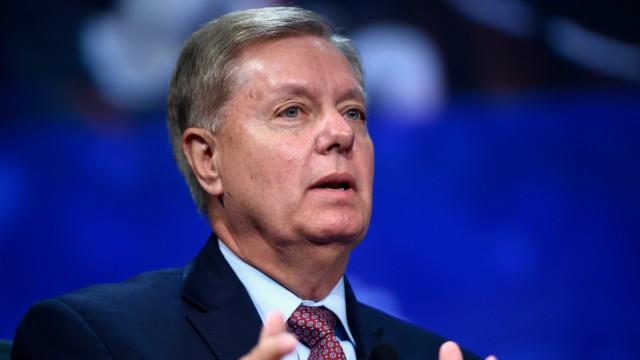 Sen. Lindsey Graham (R-S.C.) on Thursday said President Trump doesn't need congressional approval for a military strike against North Korea, but he urged his colleagues to give it "as a last resort."

"It would be very smart if the Congress could come together and tell the president 'you have our authorization to use military force ... as a last resort.' That would sent a signal to North Korea and China, that would probably do more good to avoid war than anything I could think of," Graham told conservative radio host Hugh Hewitt.

He added that passing a military authorization for North Korea would require Democrats to "take their hatred of Donald Trump and park it."

Trump's warning that North Korea could "face fire and fury like the world has never seen" if Pyongyang continues its threats has reignited a debate over if he needs approval from Congress before launching a pre-emptive military strike.

Graham, while stressing he doesn't want a war, added he "violently" disagreed with his colleague, GOP Sen. Dan Sullivan (R-Alaska), who said that a “pre-emptive war” on the Korean peninsula “would require the authorization of Congress.”

"There's nothing in the Constitution limiting the ability to use force to protect America," Graham said.

Graham said he had discussions with Trump about North Korea and described the president as "deadly serious. Very curious."

"I think he's made a decision long ago, quite frankly, to try to negotiate the threat with North Korea. ... But if negotiations fail, he is willing to abandon strategic patience and use pre-emption," he said.

"I think he’s there mentally," Graham added. "He has told me this."

Trump and North Korea have been locked in an escalating war of words. Pyongyang said on Wednesday that it would have a plan to attack the U.S. territory of Guam in place by mid-August.

Japan and South Korea said on Thursday they would swiftly respond if North Korea carries out its plan.

Graham added on Thursday that Trump could have to decide between regional stability in East Asia and defending the United States.

He acknowledged if the president launches a missile strike against North Korea, "they're going to unleash all of their weapons against South Korea and Japan. ... I would not fire one missile or drop one bomb against North Korea unless we were ready to finish the job."

"We're in a unique situation of homeland defense versus regional stability. You can't give your allies a veto when it comes to defending the homeland," he added. "But war will only happen if China completely fails in stopping North Korea."

This will not end good!