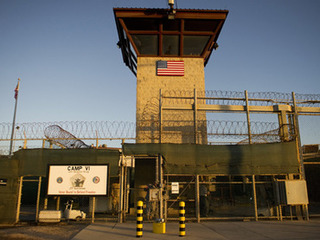 The US State Department has effectively closed down the office responsible for closing the Guantanamo Bay detention center by relieving a top diplomat of his duties.

Ambassador Daniel Fried has been released from his post, where he was charged with resettling the camp's prisoners. He diplomat will now be tasked with managing the State Department's efforts to persue sanctions against countries like Iran and Syria.

Fried’s “former responsibilities will be 'assumed' by the office of the department's legal adviser,” The New York Times citied an internal personnel memo as saying. A source provided by AFP, however, has confirmed that Fried will not be replaced, effectively closing the post.

Appointed by the Obama administration in 2009, Fried led the efforts to convince other countries to accept Guantanamo’s 242 prisoners.  But his efforts produced little results, as 166 inmates remain in the camp despite a 2009 executive order to close it.

In 2012 four prisoners were transferred, which was largely attributed to a moratorium President Barack Obama enacted on handovers to Yemen in early 2010. Currently, an estimated 86 prisoners at Guantanamo are Yemeni nationals.

The announcement follows claims by 9/11 mastermind Khalid Sheikh Mohammed and four others that they were tortured at Guantanamo, prompting their lawyers to call for the preservation of the CIA's secret prisons for use as evidence.

Research by Human Rights Watch suggests that crimes committed at the detention camp could result in the prosecution of top US officials – including former president George W. Bush – as no senior officials have been held accountable.

“The only people that have been prosecuted for the detainee abuse has been, first of all very limited number of people, handful of people – and always low level people, and never the senior officials who created the regime of torture and ordered it and authorized it and implemented it,” Andrea Prasow, a senior counterterrorism counsel for Human Rights Watch told RT.

In 2006 Bush acknowledged that the accused were among a company of "high value" detainees directed to Guantanamo from a secret prison. While in CIA custody, it is alleged that Mohammad was subjected at least to waterboarding and sleep deprivation.

Sara Flounders, the head of the International Action Center, says Washington's series of overseas prisons helps the US sidestep the Geneva Convention on the use of torture against prisoners.

“The idea of holding prisoners around the world in secret detention was that they were therefore, according to their twisted logic, immune to any international law, human rights law or conventions that the US had signed,” Flounders said.

“The UN report said 27,000 prisoners had been held by the US in secret prisons in of course Afghanistan, Iraq, countries throughout Middle East, countries throughout Europe, in Africa; on more than 17 US ships there were secret prisons,” she added. “So this is really part of a vast scale, of thousands of people being held with absolutely no rights whatsoever and being subject to horrendous torture.”

This is saying Obama closed this but I thought he still had it opened?