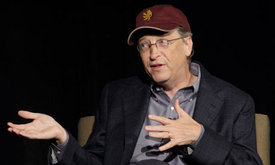 As scientists search for a plan to deal with climate change, some have pushed for a controversial approach known as geoengineering, a technological fix for climate change that involves efforts such as reflecting solar energy back into space or fertilizing the oceans.

While Bill Gates is funding geoneginering, mass media, like Guardian, is waking people up, and Greenpeace, which refBill Gates is among other wealthy individuals financially backing scientists to lobby governments to push geoengineering, raising concerns that this small group may have a large impact on further decisions on geoengineering.used to start a campaign against geo-enginering, agrees - which is great news - activists are not alone any more about it! The Guardian reports: Concern is now growing that the small but influential group of scientists, and their backers, may have a disproportionate effect on major decisions about geoengineering research and policy.

Concern is now growing that the small but influential group of scientists, and their backers, may have a disproportionate effect on major decisions about geoengineering research and policy.

"We will need to protect ourselves from vested interests [and] be sure that choices are not influenced by parties who might make significant amounts of money through a choice to modify climate, especially using proprietary intellectual property," said Jane Long, director at large for the Lawrence Livermore National Laboratory in the US, in a paper delivered to a recent geoengineering conference on ethics.

"The stakes are very high and scientists are not the best people to deal with the social, ethical or political issues that geoengineering raises," said Doug Parr, chief scientist at Greenpeace. "The idea that a self-selected group should have so much influence is bizarre."

Pressure to find a quick technological fix to climate change is growing as politicians fail to reach an agreement to significantly reduce emissions. In 2009-2010, the US government received requests for over $2bn(£1.2bn) of grants for geoengineering research, but spent around $100m.

As well as Gates, other wealthy individuals including Sir Richard Branson, tar sands magnate Murray Edwards and the co-founder of Skype, Niklas Zennström, have funded a series of official reports into future use of the technology. Branson, who has frequently called for geoengineering to combat climate change, helped fund the Royal Society's inquiry into solar radiation management last year through his Carbon War Room charity. It is not known how much he contributed.

Professors David Keith, of Harvard University, and Ken Caldeira of Stanford, are the world's two leading advocates of major research into geoengineering the upper atmosphere to provide earth with a reflective shield. They have so far received over $4.6m from Gates to run the Fund for Innovative Climate and Energy Research (Ficer). Nearly half Ficer's money, which comes directly from Gates's personal funds, has so far been used for their own research, but the rest is disbursed by them to fund the work of other advocates of large-scale interventions.

According to statements of financial interests, Keith receives an undisclosed sum from Bill Gates each year, and is the president and majority owner of the geoengineering company Carbon Engineering, in which both Gates and Edwards have major stakes – believed to be together worth over $10m.

Another Edwards company, Canadian Natural Resources, has plans to spend $25bn to turn the bitumen-bearing sand found in northern Alberta into barrels of crude oil. Caldeira says he receives $375,000 a year from Gates, holds a carbon capture patent and works for Intellectual Ventures, a private geoegineering research company part-owned by Gates and run by Nathan Myhrvold, former head of technology at Microsoft.

According to the latest Ficer accounts, the two scientists have so far given $300,000 of Gates money to part-fund three prominent reviews and assessments of geoengineering – the UK Royal Society report on Solar Radiation Management, the US Taskforce on Geoengineering and a 2009 report by Novin a science thinktank based in Santa Barbara, California. Keith and Caldeira either sat on the panels that produced the reports or contributed evidence. All three reports strongly recommended more research into solar radiation management.

The fund also gave $600,000 to Phil Rasch, chief climate scientist for thePacific Northwest national laboratory, one of 10 research institutions funded by the US energy department.

Rasch gave evidence at the first Royal Society report on geoengineering 2009and was a panel member on the 2011 report. He has testified to the US Congress about the need for government funding of large-scale geoengineering and, according to a financial statement he gave the Royal Society, also works for Intellectual Ventures. In addition, Caldeira and Keith gave a further $240,000 to geoengineering advocates to travel and attend workshops and meetings and $100,000 to Jay Apt, a prominent advocate of geoengineering as a last resort, and professor of engineering at Carnegie Mellon University. Apt worked with Keith and Aurora Flight Sciences, a US company that develops drone aircraft technology for the US military, to study the costs of sending 1m tonnes of sulphate particles into the upper atmosphere a year.

Analysis of the eight major national and international inquiries into geoengineering over the past three years shows that Keith and Caldeira, Rasch and Prof Granger Morgan the head of department of engineering and public policy at Carnegie Mellon University where Keith works, have sat on seven panels, including one set up by the UN. Three other strong advocates of solar radiation geoengineering, including Rasch, have sat on national inquiries part-funded by Ficer.

"There are clear conflicts of interest between many of the people involved in the debate," said Diana Bronson, a researcher with Montreal-based geoengineering watchdog ETC.

"What is really worrying is that the same small group working on high-risk technologies that will geoengineer the planet is also trying to engineer the discussion around international rules and regulations. We cannot put the fox in charge of the chicken coop."

"The eco-clique are lobbying for a huge injection of public funds into geoengineering research. They dominate virtually every inquiry into geoengineering. They are present in almost all of the expert deliberations. They have been the leading advisers to parliamentary and congressional inquiries and their views will, in all likelihood, dominate the deliberations of the UN's Intergovernmental Panel on Climate Change (IPCC) as it grapples for the first time with the scientific and ethical tangle that is climate engineering," said Clive Hamilton, professor of Public Ethics at the Australian National University, in a Guardian blog.

In a 2010 debate on geoengineering on Democracy Now!, scientist and environmentalistVandana Shiva cautioned against this method to deal with climate change:

...it is the idea of being able to engineer our lives on this very fragile and complex and interrelated and interconnected planet that’s created the mess we are in. It’s an engineering paradigm that created the fossil fuel age, that gave us climate change. And Einstein warned us and said you can’t solve problems with the same mindset that created them. Geoengineering is trying to solve the problems with the same old mindset of controlling nature. And the phrase that was used, of cheating — let’s cheat — you can’t cheat nature. That’s something people should recognize by now. There is no cheating possible. Eventually, the laws of Gaia determine the final outcome.

"We will need to protect ourselves from vested interests [and] be sure that choices are not influenced by parties who might make significant amounts of money through a choice to modify climate, especially using proprietary intellectual property," said Jane Long, director at large for the Lawrence Livermore National Laboratory in the US, in a paper delivered to a recent geoengineering conference on ethics.

"The stakes are very high and scientists are not the best people to deal with the social, ethical or political issues that geoengineering raises," said Doug Parr, chief scientist at Greenpeace