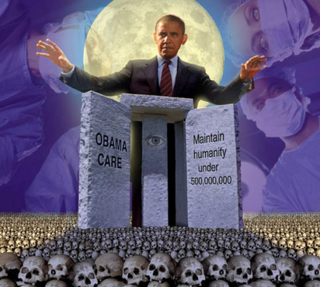 Historian and broadcaster Raymond Wiley discussed the Georgia Guidestones, a massive granite monument built in a remote part of northeast Georgia in 1980. "There's a lot of mystery and controversy surrounding both the unknown identity of the creator of the
stones, as well as the 10 precepts or guidelines that are etched into the stones,"
particularly the one that says to keep the human population under 500 million, he noted.
The Guidestones, which are inscribed in a variety of languages, serve as a kind of
Rosetta stone for people in the future, as though they are recovering from a catastrophe,
he commented.
The Georgia Guidestones is a large granite monument in Elbert County, Georgia, USA. A
message clearly conveying a set of ten guidelines is inscribed on the structure in eight
modern languages, and a shorter message is inscribed at the top of the structure in four
ancient languages' scripts: Babylonian, Classical Greek, Sanskrit, and Egyptian hieroglyphs.
The structure is sometimes referred to as an "American Stonehenge". The monument is 19 feet 3 inches (5.87 m) tall, made from six granite slabs weighing 237,746 pounds (107,840 kg) in all. One slab stands in the center, with four arranged around it. A capstone lies on top of the five slabs, which are astronomically aligned. An additional stone tablet, which is set in the ground a short distance to the west of the structure, provides some notes on the history and purpose of the Guidestones.
History
The stone featuring the English version.
In June 1979, an unknown person or persons under the pseudonym R. C. Christian hired
Elberton Granite Finishing Company to build the structure.
Inscriptions
A message consisting of a set of ten guidelines or principles is engraved on the
Georgia Guidestones in eight different languages, one language on each face of the
four large upright stones. Moving clockwise around the structure from due north,
these languages are: English, Spanish, Swahili, Hindi, Hebrew, Arabic, Chinese, and Russian. Maintain humanity under 500,000,000 in perpetual balance with nature. Guide reproduction wisely — improving fitness and diversity. Unite humanity with a living new language. Rule passion — faith — tradition — and all things with tempered reason. Protect people and nations with fair laws and just courts. Let all nations rule internally resolving external disputes in a world court. Avoid petty laws and useless officials. Balance personal rights with social duties. Prize truth — beauty — love — seeking harmony with the infinite. Be not a cancer on the earth — Leave room for nature — Leave room for nature.
Conspiracy theories
The Guidestones have become a subject of interest for conspiracy theorists. One of them, an activist named Mark Dice, demanded that the Guidestones "be smashed into a million pieces, and then the rubble used for a construction project",[8] claiming that the Guidestones are of "a deep Satanic origin", and that R. C. Christian, belongs to "a Luciferian secret society" related to the New World Order.[2] At the unveiling of the monument, a local minister proclaimed that he believed the monument was "for sun worshipers, for cult worship and for devil worship".
Radio host and conspiracy theorist Alex Jones, in his 2008 documentary Endgame: Elite's Blueprint For Global Enslavement, told the listener that "the message of the mysterious Georgia Guidestones, purportedly built by representatives of a secret society called the Rosicrucian Order or Rosicrucians, which call for a global religion, world courts, and for population levels to be maintained at around 500 million, over a 6.5 billion reduction from current levels. The stones imply that humans are a cancer upon the earth and should be culled in order to maintain balance with nature."
Computer hardware expert Van Smith said the monument's dimensions predicted the height of the Burj Khalifa, the tallest building in the world which opened in Dubai over thirty years after the Georgia Guidestones were designed. Smith said the builders of the Guidestones were likely aware of the Burj Khalifa project which he compared to the biblical Tower of Babel.