The price of bitcoin surpassed $2,000 for the first time in history today, pushing the cryptocurrency to a fresh, new record amid rising trader interest.

Now that the the digital currency has surpassed this key, psychological level of $2,000, it could experience some significant tailwinds, according to several analysts who spoke with CoinDesk.

Charles Hayter, co-founder and CEO of CryptoCompare, also weighed in on the importance of this price level, stating:

"As a psychological level, bitcoin hitting $2,000 is an important milestone and will generate further interest that could boost the price further."

Speaking of interest, analysts generally agreed that bitcoin's rise above $2,000 could spur significant attention from the media. Hayes offered similar sentiment, stating that a sustained rise above $2,000 would prompt every major financial media outlet to cover bitcoin.

In spite of all this visibility, Hayter cautioned that sometimes, the "lack of sophistication" that goes along with mainstream media coverage "can be dangerous as it snowballs momentum."

Interestingly enough, Google Trends data has thus far shown that online searches for the word "bitcoin" have still not recovered to the all-time high they set in December 2013, but they are getting closer. While a figure of 100 represents the highest point for these searches, the metric stood at 85 at the time of report.

While many agreed that bitcoin's rise above $2,000 would spur greater media coverage, the factors that drove the currency's price above this level seemed a bit more complex.

One development that has coincided with bitcoin's sharp price gains over the last several months is the rising interest of traders, as measured by trading volume at major exchanges. Earlier this month, both Kraken and Poloniex announced that they were experiencing surging transaction activity.

Kraken indicated that on 5th May, trading volume across all digital assets surpassed $178m, setting an all-time high and beating the prior record by 25%. 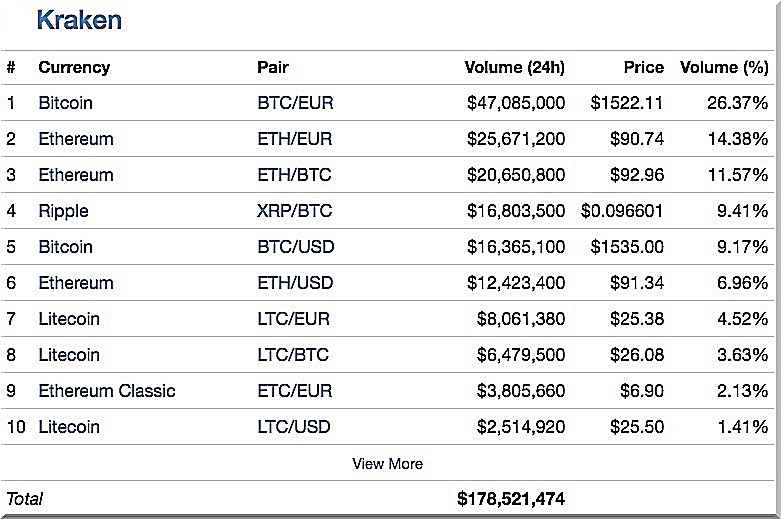 Poloniex expressed similar sentiment, saying in a statement that:

"We have never seen such enthusiasm for trading blockchain tokens as we have in the past few months. Since January, we've seen an increase of more than 600% active traders online and regularly process 640% more transactions than we did merely [four] months ago."

Another factor that has helped drive bitcoin prices is the rising influence of Japan in the bitcoin markets, where the technology is now regulated. The Japanese yen is the single largest currency being exchanged for bitcoin, accounting for more than 45% of the money flow into bitcoin at the time of report, according to CryptoCompare data.

The US dollar came in a relatively distant second, making up approximately 30% of the money flowing into bitcoin, according to additional CryptoCompare figures.

This increase in the use of the Japanese yen comes after Japan moved to formally recognize bitcoin as a legal method of payment starting 1st April. The country's lawmakers enacted legislation that both classified the cryptocurrency as a type of prepaid payment instrument and also caused it to fall under anti-money laundering and know-your-customer rules.

Bitcoin prices have even been rising sharply in spite of the cryptocurrency's ongoing scaling dilemma, an ongoing issue with its transaction capacity that members of the bitcoin community have been trying to resolve.

Developers could address this problem by increasing block size, increasing the number of transactions that can fit into an individual block through Segregated Witness, or both. Thus far, the bitcoin network has failed to rally the support needed to bring about any such changes.

Still, bitcoin markets seem unhindered by the scaling dilemma, and Hayes spoke to this development:

"It appears the scaling issue is forgotten. The positive momentum and publicity continues to attract new capital into bitcoin."