This homemade honey buttermilk bread recipe has a tender crumb and a slightly sweet flavor from honey. The loaf rises high and light – a great bread for kids who only want the soft commercial kind! Images will help you at every step.

This honey buttermilk bread loaf isn’t so sweet that it doesn’t make good sandwiches but you can definitely taste the honey in it.  I know this shows three loaves of the bread but the recipe makes just two…I just tend to make six loaves at a time.

You almost can’t find real buttermilk anymore. Have you read the ingredients in that stuff? I prefer to make my own, although admittedly you have to start with the commercial buttermilk. Here is the post on how to make buttermilk if you haven’t seen it before. It’s so easy and you’ll be amazed at the difference in your baked goods.

Keep in mind that today’s cultured buttermilk is not the same as old fashioned buttermilk that was leftover from making butter.

My dad used to drink this stuff. He’d add some salt an pepper and then drink it down. I couldn’t do it back then and I can’t do it now — but I do love what it does for tenderizing meat and making amazing baked stuff.

I have been making bread for 40 years. I came to that realization the other day and it sort of freaked me out. I  totally do not identify with the idea of what a grandmother should look like, nor do I ever want to. Still, 40 years of bread baking is significant I think. My mom didn’t bake. As I recall I was lying on the couch one day, paging through a Seventeen magazine and they had a recipe for bread. I don’t know if they still publish recipes but they used to. I was bored, it seemed like a cool 70’s kind of thing to do, and why not? After all, the early 70s were all about artisan and handcrafted things.
In a lot of ways it wasn’t so different from how it is now. In fact, neither am I — there’s just more of me. 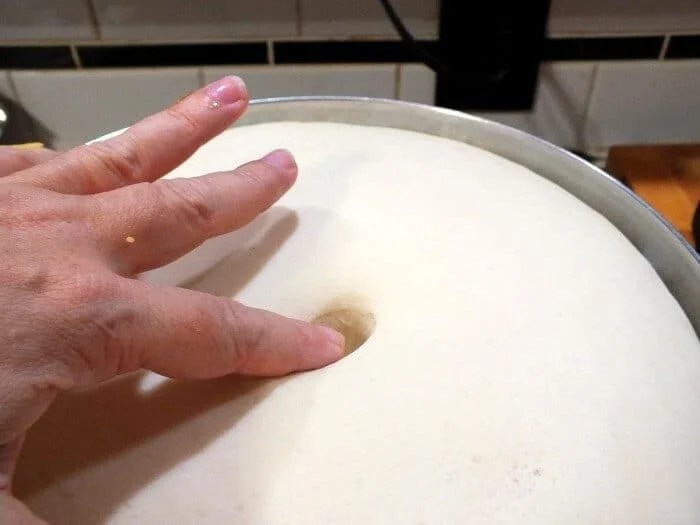 When fully risen your finger will leave a dent in the dough and the bowl will feel light when you pick it up.

So I did it. I just followed the directions and there it was.

It was magical. The house smelled great and I had accomplished something I had never seen or done before. I’d never had homemade bread and honestly I’d have to say that it was one of those moments that changed my life. It was an epiphany and would more or less guide my food life from that moment on. It took me forever to bake but the result was delicious — I was hooked. 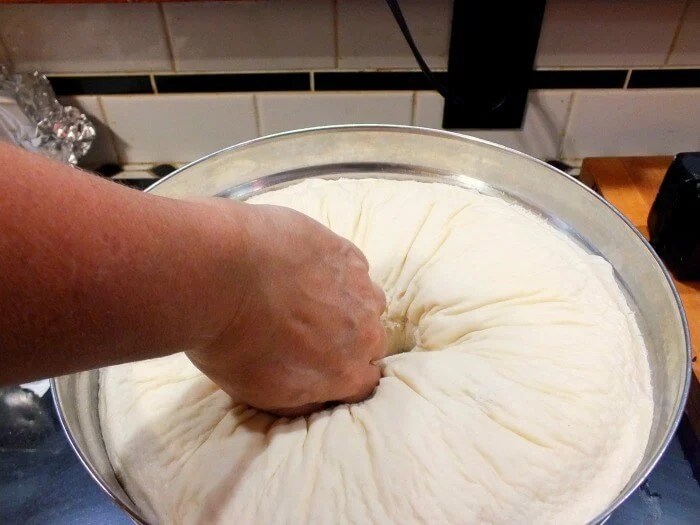 Punching the buttermilk bread dough down is exactly that. Drive your fist into the center. No need to be gentle. If more people made bread the world might be less violent.

I wasn’t allowed in the kitchen much but my parents did make an exception for my bread making endeavors. I experimented and by the time I was sixteen I spent my days off from work experimenting with sour dough, rye, wheat, salt rising, oatmeal, and almost any other yeast bread you can imagine.

Homemade buttermilk bread has always been one of my favorites because of the texture, flavor, and lightness.

Properly punched down bread. Give it a couple of minutes to rest and relax before you shape it.

It’s kind of funny that I never baked a cake or cookies until after I was married, though. Talk about putting the cart before the horse, right?

I like to buy a large quantity of  yeast (affiliate link). It’s much cheaper that way and it will last in a tightly sealed jar in the refrigerator for a long time.

I realized as I was writing about this honey buttermilk bread recipe that I have a super simple recipe for croissants that I haven’t shared. I promise I will get that up here soon. If I don’t please head on into the RestlessChipotle Facebook page and remind me, ‘k?

What is your favorite kind of bread? Leave a comment and let me know — maybe I’ll feature the recipe.

Just a quick note… If you’ve wanted to learn to bake bread but it never comes out quite the way you think it should… you might like my new book, Bread Boot Camp.

Learning to bake bread can seem very intimidating and many would-be bakers quit in frustration. Bread Boot Camp teaches you to create tall, fluffy loaves of bread using an incremental approach – learning the techniques step by step so that by the end of the book you’ve mastered it. More importantly, you’ve had fun doing it! Plus, get 10% off with coupon code YR83Y  You can also get the paperback version on Amazon -Bread Bootcamp: It’s Not a Cookbook…It’s an Adventure