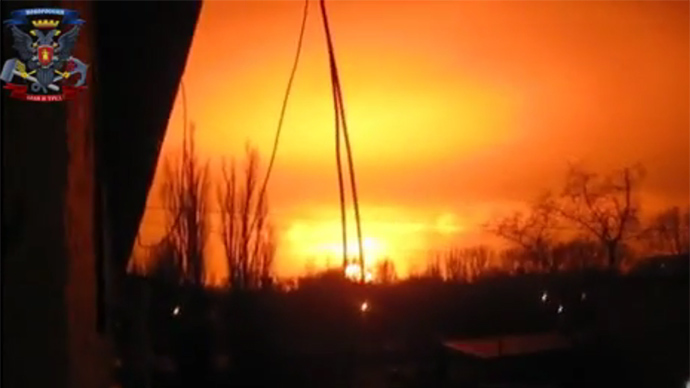 Windows were shattered and homes shaken in Donetsk after a huge blast rocked the vicinity of a city chemical plant. A Ukrainian MP praised pro-Kiev forces for hitting a target – but said they “don’t know what they hit.”
The powerful explosion took place at 10:50pm local time on Sunday. Local militia reported that a military chemical plant DKZHI was the target of Kiev’s artillery shelling.
Witnesses saw the sky lit up by the explosion, some nearby living residents had their windows broken by the blast’s shockwave and many others felt the ground shake, RIA Novosti reported. Even those living in nearby towns said they felt the tremor.
“The epicenter of the blast was near DKZHI,” co-chairman of the anti-Kiev People’s Front Konstantin Dolgov said on his Facebook page. The factory is known for producing chemical products used for industrial explosives, ammunition and equipment artillery bombs. This is not the first time the plant has been the target of a Kiev attack. It was also hit with artillery rockets in September and November.
The militia forces would not immediately confirm if there were casualties, either among militiamen or civilians. But they said the fire, which started after the explosion, poses no threat of a chemical spill, which is a cause of great concern at the plant, as it handles toxic compounds in producing explosives.
“The fire has been contained. There is not threat of chemical spill… Most likely it was a high-caliber artillery shell,” a local news outlet cited a military source as saying.
Ukrainian military deployed multiple rocket system Smerch (the BM-30 Tornado) to shell the area in the city, Boris Filatov, former deputy head of the industrial Dnepropetrovsk Region and a member of the Ukrainian parliament (Verkhovna Rada), said on his Facebook page.
According to Filatov, the men who fired the missiles “do not know what they hit because they were shooting based on coordinates.”
Earlier, Ukrainian far-right politician and paramilitary commander Dmitry Yarosh, who is involved in the Kiev military action in southeastern Ukraine, confirmed on his Facebook page that the explosion was caused by Ukrainian artillery.
Yarosh, who is wanted by Interpol on charges of inciting terrorism, was elected to the Rada in October 2014. He played a key role in the protests on Maidan (Kiev’s Independence Square), which led to the toppling of Viktor Yanukovich’s government earlier that year. Back in May, the Right Sector leader received less than 1 percent of the vote in Ukraine’s presidential election.
Meanwhile, the situation in southeastern Ukraine has been rapidly worsening since January 18, when Ukrainian troops have launched a massive assault on militia-held territories after an order from Kiev.
Shelling of the rebel-controlled towns has been witnessed on a daily basis, including the city of Donetsk, with both sides blaming each other for violence. Meanwhile, the indiscriminate shelling of residential areas by Kiev, at times with internationally-prohibited arms, has even been confirmed by the Ukrainian government’s strongest supporter – Washington.

John McCain, US Chairman of the Senate Committee on Armed Services, said Kiev used cluster bombs – claiming it’s because Ukrainian troops did not have better weapons delivered to them by the US.

READ MORE: US partly to blame for Ukraine’s use of cluster bombs – ...

Reports from Donetsk coincided with the latest report from the German intelligence service, which estimates the real losses in the Ukrainian civil war at 50,000 dead (civilians and servicemen). This reported figure is nearly 10 times higher than the death toll named by the Kiev authorities.

Meanwhile, the Ukrainian crisis became the center stage of discussions as the world leaders commenced for the Munich Security Conference.

How can there be peace in Ukraine when the population speak in many tongues? Independent Ukraine is a thorn in mother Russia's side. Russia should have veto rights over the disputed area, otherwise there will never be a peace solution. Pro-Russian forces should stop fighting and look to the future with compassion and rightfulness.

Russian Pertaining to Russia. Its people, or their language. An inhabitant of Russia; especially, one of any of the Slavic peoples of the U.S.S.R., including the Great Russians of the central and north-western region, the Ukrainians (or Little Russians) of the Ukrainian S.S.R. and eastern Poland, which group includes also the Cossack and Ruthenians, and the White Russians of the west, all speaking Indo-European Balto-Slavic langugages, such as Russian. Polish, Lithuanian, and Lettish; also, one of any of the peoples of Russia speaking any of the Uralic languages, especially the Finno-Ugric branch; also, one of any of native peoples of the Caucasus speaking languages unrelated to these others, as Circassian, Georgian, and the Lesghian group. The language of Russia, belonging to the East Slavic branch of the Balto-Slavic languages, having a separate alphabet including several characters not found in other alphabets. Its subdivisions are Great Russia, the principal subdivision and standard literary language in northern and central Russia, Ukrainian or Ruthenian (or Little Russian), and White Russian, the literary language of western Russia.

Sanction should be lifted on Russia and pro-Russian never shot-down MH17 from the sky either. President Putin only wants peace for his people, not WW111.