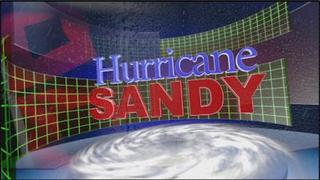 11:25 PM EDT: New York City power company ConEd says a decision will be made on Monday to proactively shut off service to some customers based on tidal surges. 6:06 PM EDT: WABC in New York is reporting that the New York Stock Exchange’s trading floor will be closed tomorrow.

6:00 PM EDT: Federal offices in the Washington, DC area will be closed tomorrow because of the hurricane.

In Cape Charles, Virginia an officer tapes off the town fishing pier and beach to restrict access.

5:40 PM EDT: Looks like FreshDirect, the food delivery service in New York, is canceling its deliveries for tonight. Looks like those people in line at Trader Joe’s have the right idea!

5:29 PM EDT: We also have storm tips for pet owners! Does ABC have you covered or what?

5:10 PM EDT: The Associated Press reports now that the storm-related death toll is up to 65 in the Caribbean, 51 of which are in Haiti. The storm ended on Friday there.

“As conditions worsen along the Mid-Atlantic and other parts of the East Coast, residents need to listen to the direction of local officials. This is a large storm and the potential impacts from wind, coastal flooding, inland flooding, rain and snow will affect many states,” Craig Fugate, FEMA administrator said in a statement.

4:49 PM EDT: Simultaneously, Massachusetts Gov. Deval Patrick is holding a press conference right now. Watch live here. “We are going to get through this we are as well prepared as we possibly can be,” Patrick said.

4:40 PM EDT:  “Be prepared to stay in your home for an extended period of time,” Pennsylvania Gov. Tom Corbett said. “We prepare for the worst and hope for the best.”

4:30 PM EDT: ABC News’ Dan Kloeffler tweeted the following with the picture below: “Take that Apple! Trader Joes Lines ‘em up too.” Translation: In New York City the line for Trader Joe’s wraps around the corner as people stock up on food and water. - Apps and Tech Tips to Track the Storm

- What You Need to Know about Flood Insurance

4:08 PM EDT: New York City Mayor Bloomberg is updating residents in a live press conference right now. Watch here. “”If you live in Zone A and have not yet evacuated, do so as soon as possible. Time is running out,” Bloomberg said.

4:07 PM EDT: ABC News’ Emily Friedman tweets that both the Romney and Obama campaigns have halted fundraising e-mails in states impacted by the storm.

4:00 PM EDT: Just a update on the storm. The satellite image below is from 2:00 p.m. EST. You can track the storm at our Hurricane Sandy Live Storm Tracker.

3:49 PM EDT: The Department of Energy has just issued its first report on power outages. As of 2:00 p.m. EST, there are fewer than 5,000 customers without power in Delaware, the District of Columbia, Florida, Maryland, North Carolina, South Carolina, and Virginia.

3:42 PM EDT: ABC News’ Devin Dwyer reports that the Obama campaign is encouraging supporters by e-mail, Facebook, Twitter and on its homepage to donate to the Red Cross hurricane relief effort.

Additionally, Obama campaign officials at the Chicago headquarters and in key battleground states Virginia, Ohio and Pennsylvania tell ABC News they are preparing contingencies to ensure the safety of supporters, volunteers and staff as a top priority.

Some local canvassing events may be postponed or cancelled across affected areas, the campaign said. Several planned rallies involving the President, Vice President and First Lady this weekend and early next week have already been cancelled. More schedule changes could follow depending on how the storm plays out.

“We’re taking things on a case by case basis at this phase,” an Obama campaign official told ABC News.

3:29PM EDT: In the photo below, taken today, ocean water rolls over NC 12 between Frisco and Hatteras Village, the area where Hurricane Isabel cut through Hatteras Island in 2003.

3:10 PM EDT: Amtrak has cancelled nearly all service on the eastern seaboard for tomorrow.   “All Acela Express, Northeast Regional, Keystone and Shuttle services are canceled for trains originating on that date. Also Empire Service, Adirondack, Vermonter, Ethan Allen and Pennsylvanian train services suspended, along with overnight services to and from the East Coast,” Amtrak said on its Facebook page.

3:00PM EDT: An update on Philadelphia. There will be a formal press conference held at 5 PM EST today, but by midnight if not sooner all mass transit will be shut down, including New Jersey transit, Patco Highspeed lines and SEPTA. Philadelphia bridges will also be shut down at 65mph.

2:57 PM EDT: The image below is becoming a familiar one as people stock up on food and water. In this particular case, John Marino of Merrick, N.Y. grabs the few remaining water bottles from the shelves at the Waldbaums grocery store.

2:44 PM EDT: Following a briefing at FEMA, Obama has just issued a statement about the storm: “This is a serious and big storm and my first message to all the people across the Eastern seaboard, mid-atlantic, going north, is that you need to take this very seriously and follow the instructions of your state and local officials. Because they are going to be providing you with the best advice in terms of to how to deal with this storm in the coming days.”

Obama added, “My message to the governors, as well as to the mayors – anything they need, we will be there. And we’re gonna cut through red tape, we’re not gonna get bogged down with a lot of rules, we want to make sure that we’re anticipating and leaning forward into making sure that we’ve got the best possible response for what is going to be a big and messy system.”

2:32 PM EDT: New Jersey Gov. Chris Christie just wrapped his press conference. He urged people to be prepared, but also told people not to panic. In fact, he told people to watch the Jets game.

In the photo below, a police officer sets up a road block on South Oregon Inlet Road as water from Hurricane Sandy covers the road in Nags Head, N.C.

1:57 PM EDT: ABC News’ Devin Dwyer reports: As Hurricane Sandy bears down on the east coast, Obama campaign officials at the Chicago headquarters and in key battleground states Virginia, Ohio and Pennsylvania tell ABC News they are preparing contingencies to ensure the safety of supporters, volunteers and staff as a top priority.

Some local canvassing events may be postponed or cancelled across affected areas, the campaign said. Several planned rallies involving the President, Vice President and First Lady this weekend and early next week have already been cancelled. More schedule changes could follow depending on how the storm plays out.

“We’re taking things on a case by case basis at this phase,” an Obama campaign official told ABC News.

The campaign announced today it was proceeding with President Obama’s planned rallies in Cincinnati and Akron, Ohio, on Wednesday.

Aides are exceedingly confident the storm will not impact early voting or their get-out-the-vote efforts.

“Our historic grassroots organization is running at full speed in Florida and Eastern battleground states to persuade undecided voters and get our supporters out to the polls between now and Election Day,” said Obama spokesman Adam Fetcher.

1:49 PM EDT:ABC News’ Matt Hosford reports that Jet Blue, US Airways and Delta have announced they are shutting down operations at airports in Sandy’s path. Other carriers are also expected to announce similar suspensions of service.

People scheduled to fly to or from the eastern third of the country are encouraged to check their flight status.

1:41 PM EDT: The Port Authority of New York and New Jersey is suspending all PATH service beginning at midnight so trains and stations can be secured before the worst of Hurricane Sandy makes landfall. PATH service will resume as soon as conditions permit.

“This prudent and necessary action will enable NJ TRANSIT to further support our state’s response to Hurricane Sandy; freeing up resources that may be needed to further facilitate hurricane relief,” said James Simpson, who serves as New Jersey Transit board chairman and New Jersey Department of Transportation commissioner.

1:24 PM EDT: ABC News’ Matt Hosford reports that Delta has cancelled all flights in and out of New York City airports and Philadelphia tomorrow. Nationwide, overall cancellations are at 3,700 for Monday, according to Flight Aware.

1:10 PM EDT: As Hurricane Sandy heads up the Eastern Seaboard, officials urged residents in Sandy’s 800-mile path to act now to ensure their safety.  ”The time for preparing and talking is about over,” Federal Emergency Management Administrator Craig Fugate said. “[We are] pre-deploying people and resources into the area and are gearing up for the potential impacts of the storm.”