IDENTITIES OF 71 GITMO PRISONERS ELIGIBLE FOR HEARINGS RELEASED BY US 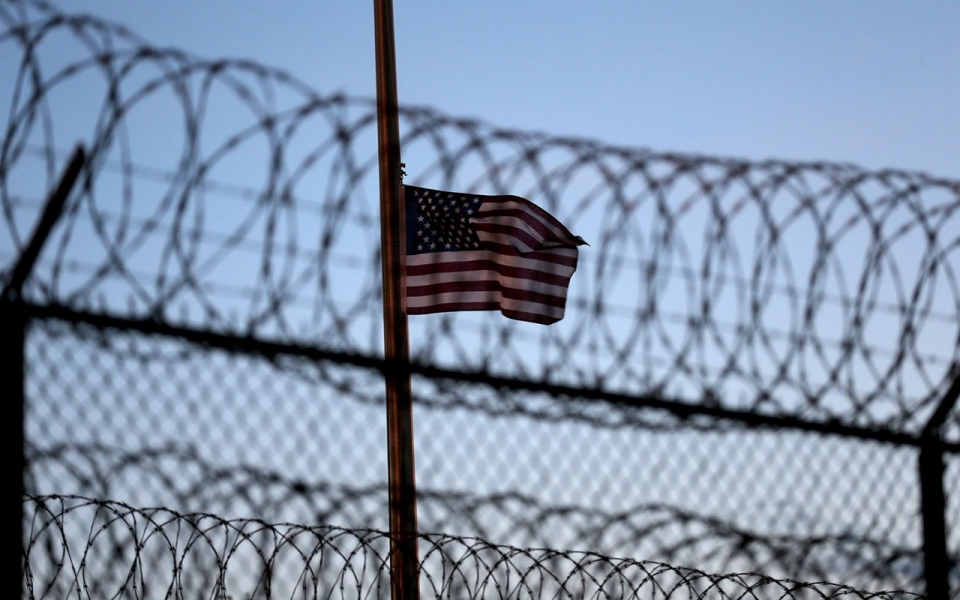 The Department of Defense has released an official list identifying 71 Guantanamo Bay prisoners who are eligible to receive parole-board-style hearings. The list includes a high-profile former CIA captive named Abu Zubaydah, who was waterboarded dozens of times.

Pentagon officials acknowledged last July that 71 prisoners qualified for parole board hearings, but they refused to identify who those prisoners were.

It’s unknown what criteria the Pentagon used to determine that Zubaydah, identified on the list as Zayn al-Ibidin Muhammed Husayn, qualified for a hearing before a Periodic Review Board, whose job is to assess whether “continued law of war detention is necessary to protect against a continuing significant threat to the security of the United States."

Last year, Al Jazeera exclusively obtained six volumes of diaries Zubaydah wrote between 1990 and his capture in March 2002. The government-translated documents revealed that he helped accused members of Al-Qaeda escape from Afghanistan after the U.S. invasion in 2001.

Attorneys for Zubaydah said they have not been notified about a hearing for the high-value prisoner, and it seems unlikely the panel of government officials who sit on the parole board would conclude that Zubaydah no longer poses a national-security threat to the U.S.

The unclassified two-page list was obtained by Al Jazeera in response to a Freedom of Information Act (FOIA) request filed last July, immediately after a Defense Department official began notifying attorneys for some prisoners that parole hearings would begin in an effort to empty out Guantanamo and help President Barack Obama make good on his five-year-old promise to shutter the detention facility.

There is a lot of energy now within the Department of Defense and the White House to close Guantanamo ... The administration will not publicly or privately tip their hand on how they plan to get this done by the end of the year. But they are determined to do it.

The list of potential parolees was released at a time of heightened secrecy at Guantanamo. In mid-December, prison officials announced they would no longer provide the media with the number of prisoners on hunger strike or those who have been designated for force-feeding. Moreover, the prison’s public affairs staff in January issued a stricter set of ground rules for journalists who tour the detention facility.

What’s notable about the parole list is that it is dated April 19, 2013, indicating that it was prepared at the height of — and perhaps in response to — a mass hunger strike at Guantanamo. Six days earlier, Guantanamo guards raided a communal camp that housed “compliant” prisoners and placed them in solitary confinement. Prisoners told their attorneys that they had launched a hunger strike to protest Quran searches, but it later grew into a larger protest about their decade-long indefinite detention.

Since government officials prepared the list last April, only two prisoners, Mahmud Abd Al Aziz Al Mujahid and Abdel Malik Ahmed Abdel Wahab Al Rahabi, have received hearings before the Periodic Review Board, which is made up of senior-level officials from various U.S. government agencies. Two additional prisoners, Ghaleb Nassar Al Bihani and Ali Ahmad al-Rahizi, have been notified that their cases will be heard next.

Last month the board determined that Mujahid, a Yemeni, no longer poses a national security threat and can be released. However, it’s unknown if and when he will be repatriated to Yemen because of the administration’s ongoing concerns about the presence in the country of Al-Qaeda in the Arabian Peninsula.

The Pentagon maintains a separate list of prisoners who have already been cleared for release or transfer by the Bush and Obama administrations, yet those men continue to languish at Guantanamo. Currently, there are 155 prisoners detained there. Eleven have been released since last August.

In his State of the Union address in January, Obama said, “This needs to be the year Congress lifts the remaining restrictions on detainee transfers and we close the prison at Guantanamo Bay.”

But the number of prisoners identified on the parole board list is a sobering reminder of how much work remains and how unlikely it may be for Obama to achieve that goal, given the slow nature of proceedings pertaining to Guantanamo.

Caitlin Hayden, a National Security Council spokeswoman, said: “To the greatest extent possible and consistent with our national security interests, detainees designated for transfer will be repatriated or resettled.

“And detainees who can be prosecuted will be tried in federal courts or military commission proceedings,” Hayden added. “As seen in the result of the first Periodic Review Board hearing, detainees may be redesignated to allow for their repatriation or resettlement.”

Army Lt. Col. Todd Breasseale, a Pentagon spokesman, also would not respond to specific questions about any challenges the Pentagon may face in helping the president shutter Guantanamo this year. But he said, “We remain in agreement with and fully support the president's goal of shutting down the detention facility.

“The Department follows the law,” Breasseale said. “And when the law accommodates closing the detention facility at Guantanamo Bay, we shall do it. Until that time, we will continue to safeguard the detainees in our charge there.”

Chris Anders, the senior legislative counsel for the American Civil Liberties Union, believes 2014 may be the year Obama can make good on a promise he made shortly after being sworn into office in 2009 to close Guantanamo.

“This year you will see a very significant reduction in the population at Guantanamo,” Anders said in an interview. “There is a lot of energy now within the Department of Defense and the White House to close Guantanamo. The key question is, will Guantanamo be closed at the end of the year by just transferring detainees here and transferring indefinite detention here? The administration will not publicly or privately tip their hand on how they plan to get this done by the end of the year. But they are determined to do it.”

Earlier this month, one of the prisoners on the parole board list, Ahmed Al Darbi, the brother-in-law of 9/11 hijacker Khalid al-Midhar, had his case referred to military commissions for war crimes charges. Al Darbi is accused of having aided and abetted a suicide attack on the French oil tanker M/V Limburg in Yemen on Oct. 6, 2002.

On Wednesday, reports surfaced indicating that Al Darbi had struck a deal with military prosecutors in which he would plead guilty to war crimes charges in exchange for his testimony against a high-profile Guantanamo prisoner and would eventually be released to Saudi Arabia after serving out a sentence at Guantanamo.